This story has already made the rounds a little bit, but it was so outrageous that I couldn’t resist weighing in. Imagine that you had a young son or daughter in school right now. After some of the things I’ve read over the last couple years, that’s a terrifying thought indeed. The way that the SJW types are using every single access point they have to infect children with their poisonous ideology is staggering. You really have to make sure you have a strong and open relationship with your kids or else you will probably lose out through sheer volume.

Take this, for example…

A Florida mother is outraged after her 12-year-old daughter came home with an assignment she was given in her seventh grade Spanish class.

Regina Stiles posted on her Facebook page a form that asked students “How much privilege do you have?”

It instructed students to circle the boxes that apply to them in the categories of race, skin color, religion, sex, gender, sexual orientation and disability.

The options under gender included, “cisgendered,” “transgendered” or “genderqueer.”

Stiles told WTSP that her daughter didn’t even know many of those terms.

“I try to maintain my children’s innocence as long as possible,” Stiles said. “And that is not something she should be taught at school.”

She added that her daughter’s sexual orientation has nothing to do with schoolwork, let alone Spanish class.

“You’re here to teach my child a foreign language, not anything else,” Stiles said. 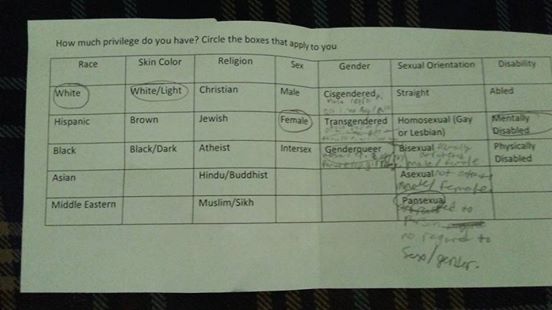 The girl is 12, for fuck’s sake. She’s not even in high school and is already being bombarded with this kind of material. I know that for me personally, I would be acting just like Ms. Stiles. This teacher should be disciplined and possibly even fired. The only reason I might cut the educator a one-time break is because it’s reportedly their first year on the job. Even so, this is an egregious example of just what we’re up against in our public schools. Keep this trash out and let kids be kids for as long as possible.