A great segment on 60 Minutes aired last night.  I only caught the very end before I passed out for the night. But luckily for us, CBS put it up on their website, and made it available for embedding. So I can share it with you here. If you’re not familiar with the Duke Lacrosse Hoax, the piece does a good job of showing you how reckless D.A. Mike Nifong was. He has since been disgraced and disbarred, but the activists who went along with his bullshit are still there…people like Amanda Marcotte and Jessica Valenti. Here’s what Marcotte had to say after the whole thing had been revealed as a sham:

“I had to listen to how the poor, dear lacrosse players at Duke are being persecuted just because they held someone down and f**ked her against her will – not rape, of course, because the charges have been thrown out. Can’t a few white boys sexually assault a black woman anymore without people getting all wound up about it? So unfair.”

Note the timing. Marcotte wrote this after the charges in the Duke Lacrosse case were thrown out, and the whole business was exposed as a sham. In fact, even in the sanitized version of the blog post that survives today, she writes, “The prosecution in the Duke case fumbled the ball. The prosecutor was too eager to get a speedy case and make a name for himself.” In a sense she’s right. Nothing says a prosecutor “fumbled the ball” like getting disbarred for deliberately withholding exculpatory evidence in a case. However, one suspects that Marcotte thinks Mike Nifong, the prosecutor in question, should have just found a more out-of-the-way storage locker for the “exculpatory evidence” in question, in view of her lengthy and disturbingly lynch mob-esque writing about the case.

As you can see, she wasn’t contrite at all. None of these sex hustlers were. Valenti just as disturbing in that excerpt from her book I linked above: 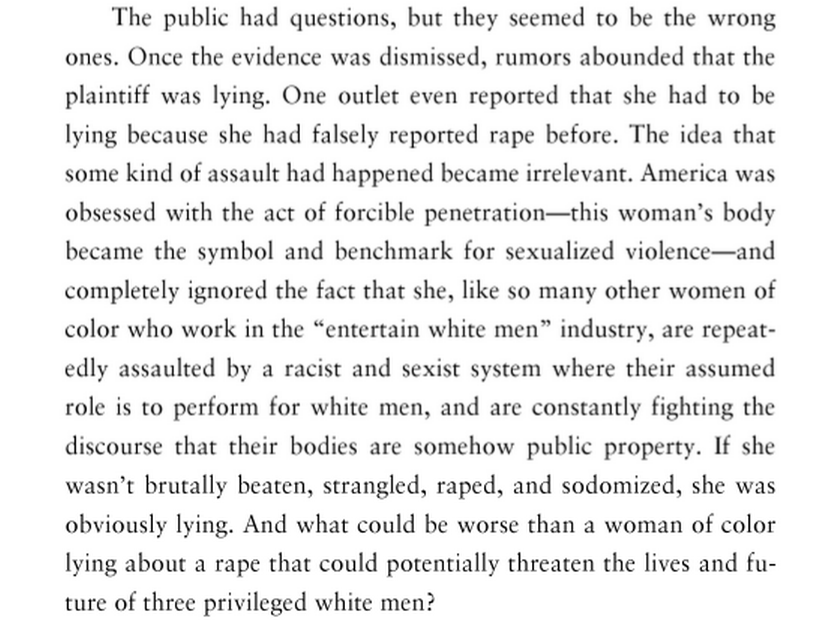 By the way, the stripper who falsely accused these guys is now in prison, due to the fact that she killed a guy. I’ll leave you with that last factoid before the video.