ADVERTISER WALKS: Another Blow To Gamasutra

It turns out shitting on your customers and employing unstable racist bullies is bad for business. We’ve already seen Gamasutra lose Intel recently. Remember me talking about that hopefully forming a cascade, with other advertisers following suit? Well, it’s happening. The Michigan Economic Development Corporation (MEDC) has followed Intel’s lead, and deserted Gamasutra.

Gamasutra has now been tarnished, and they are unlikely to ever recover. We’ve seen this sort of death spiral before with other publications and sites. Sometimes, the hubris of an editorial staff simply becomes too much for the business side to bear. The money-men can only do so much when you fuck up as badly as Leigh and the gang. How would you like to have the job of trying to clean up their mess right now? I almost feel sorry for them.

So, who will be the next to disassociate from this rancid corpse of a games site? I would have to imagine that all are reconsidering their advertisements at this point. My Gamasutra tombstone meme was intentionally over-the-top. But we may seriously be witnessing their last months of existence. How are they going to make any money if this continues? I guess the owners (UBM) could decide it’s OK to lose money on it, but I wouldn’t think that would be worth it. Who knows, though? They’ve kept the disappointment going this long. 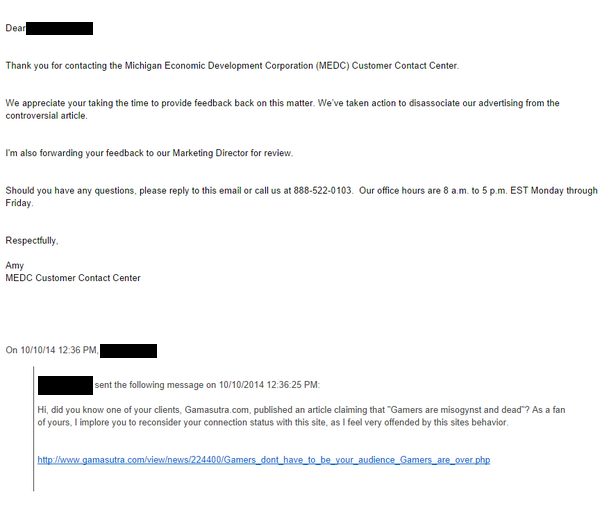 Yea, The Wolverines might suck this year. But the State of Michigan is on fire. I’ll be proud to spend my hard earned dollars in their state whenever I get the chance. I encourage others to do the same. Show your love on Twitter as well. Let the decision makers know that GamerGate supports those who support us. And unlike the SJW phonies, we do it with our hard-earned cash.