OK, let’s start the day off with the last cartoon from the first series, as well as an interview that C.H. Sommers did with neoconservative bigshot Bill Kristol. Movie Slob, the disgusting thug that he is, has decided to make a big deal about Kristol supporting us. This is rich, coming from someone who has compared us to violent racists and the like. Honest presentation of the facts doesn’t seem to be a huge concern with this sloppy fucker. 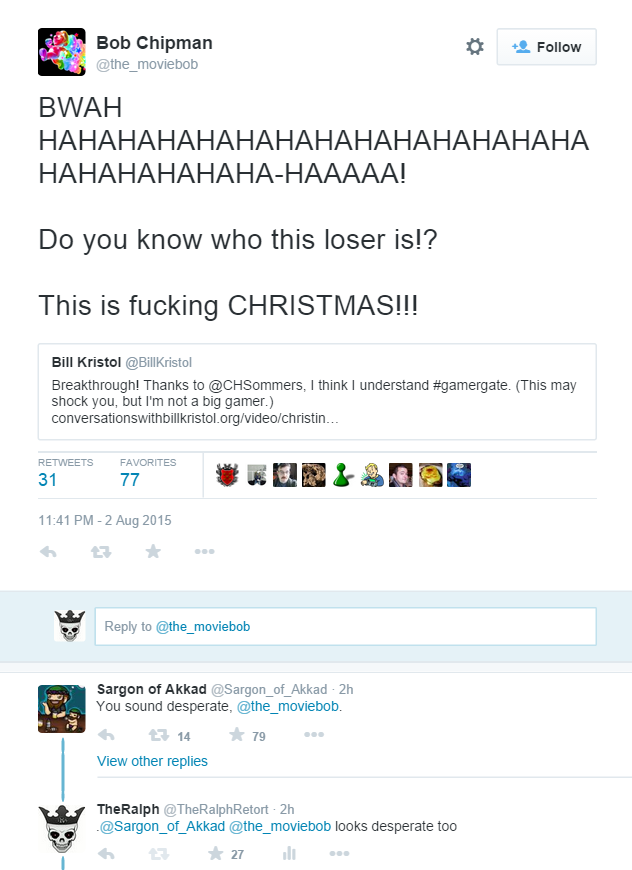 You guys know my philosophy: I take support in this fight from whoever offers it. I opposed the Iraq War and continue to think it was one of the most astoundingly stupid things that I’ve witnessed in my lifetime. But I don’t throw support away because I disagree with someone on unrelated issues. I don’t agree with Milo on everything, either. But he has my eternal respect for all he’s done in this fight, and for just generally being one of the coolest motherfuckers to ever live.

Greasy hucksters like Movie Bob can go take a flying leap. The beauty of GamerGate is that we accept all supporters. At least, the rational among us do. I’m not disowning any respectable support, especially the high profile variety. Anyway, enough with the rant, watch the interview for yourselves, if you haven’t already. GG is covered in the last 10 minutes:

And here’s the strip, as promised: