If you thought this Friday couldn’t get any better, you were wrong. There’s a few certain things that really make me smile. Snow on Christmas day, a hotdog at the ballpark, lazy Saturday mornings…and getting to see Zoe Quinn’s boyfriend, Alex Lifschitz, get pimp-smacked on Twitter. It used to happen with regularity, until we mostly started ignoring him (cause he’s a nobody). The thing is, he inserts himself into our discussions, like he did today. It’s like his fetish is getting his ass kicked by GamerGate, because he rarely makes a decent point, and even his insults suck.

We can go back to ignoring him again, right after this epic smackdown has been chronicled. Today, he had the nerve to call out Disturbed frontman, and GamerGate supporter, David Draiman. What for, you ask? Over his association with GamerGate, of course. Apparently, we now huge anti-Semites as well as racists and harassers. You can see how this accusation might come as a surprise to someone like Draiman, since it’s completely untrue. 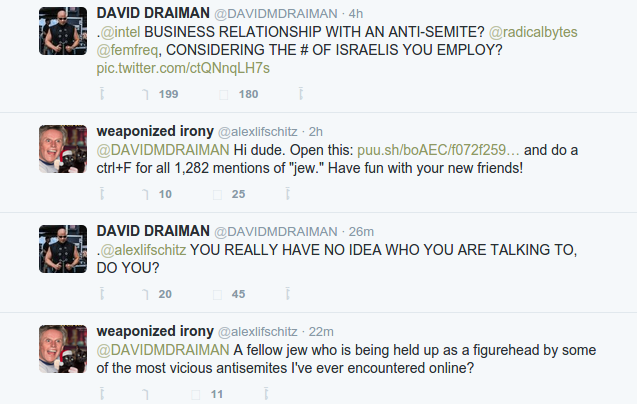 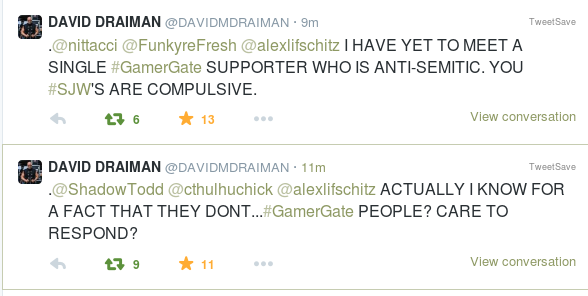 No, we’re not anti-Semitic, just anti-dumbass. We’re also anti-jackasses who think they’ve actually done anything of note in the gaming industry, when in reality, the were glorified coffee boys. Seriously, what has this person ever done? Why would anyone want to listen to a talk about the gaming industry? I would just as soon hear Miley Cyrus give a speech on economics. I’m sure she knows more about that, than you do about gaming. Why don’t you stop trolling GamerGate, and go help your (allegedly) criminal girlfriend with her bullshit Twine games? Or would that be too much to ask?

Oh, and here’s why Draiman was probably upset. Do you think for one minute someone like this would support us if he thought we we hated Jews? Alex Lifschitz needs to have his fucking head examined.

UPDATE: The beating didn’t stop when the article did. Here’s some more highlights from Draiman: