ALL SHOOK UP: Kurt Eichenwald Has Made Sending a Gif a Criminal Offense

Earlier today, the notorious “Jew Goldstein” was arrested by FBI agents at his Salisbury, Maryland home for the grave criminal offense of sending a flashing gif image at Kurt Eichenwald hours after he flamed out on Tucker Carlson’s Fox News program. I’m sure you’ll be shocked to find out that his name isn’t actually Jew Goldstein, as Newsweek is reporting that his government name is John Rivello (and it looks like he’s a Marine).

Steven Lieberman, Eichenwald’s lawyer, named the suspect as John Rivello. A law enforcement official who spoke on the condition of anonymity confirmed the name. FBI officials arrested the man at his home in in Salisbury, Maryland, around 7 a.m. on Friday, according to Lieberman. Rivello was expected to appear at a hearing in federal court in Baltimore on Friday afternoon, Lieberman said.

“What Mr. Rivello did with his Twitter message was no different from someone sending a bomb in the mail or sending an envelope filled with Anthrax spores,” Lieberman says. “It wasn’t the content of the communication that was intended to persuade somebody or make them feel badly about themselves; This was an electronic communication that was designed to have a physical effect.”

Yes, sending a gif on Twitter is no different that sending someone an envelope filled to the brim with deadly Anthrax. Who could argue with this flawless logic? Of course, Kurt had to get on Twitter and gloat about this, despite there being no real evidence that he suffered a seizure.

He currently faces federal charges & is expected to also be indicted by the Dallas District Attorney on different charges in next few days.

I want to thank Dallas Police, Dallas DA, US Attorney in Dallas, the FBI & the Dept of Homeland Security who all played a role in this case.

Seizures suck, I will be the first to admit that. I’ve actually suffered at the hands of one at least six times. If you have a major one, every muscle in your body is left feeling cramped. Many times, you end up biting the hell out of your tongue. So, if Mr. Eichenwald really did suffer a seizure that evening, my condolences. Somehow, I doubt that he actually did. Why?

Well, for one, he talked about being subject to this sort of “attack” before. In his Newsweek column, Kurt mentioned taking several precautions to prevent being victimized a full two months before he allegedly suffered at the hands of Jew Goldstein. I think what actually happened is that this guy got smoked by Tucker Carlson and wanted to take the heat off his performance, which was panned across the political spectrum for being a completely unhinged mess.

I can’t prove it, but that would be my speculation.

The funniest thing I’ve seen in relation to this might be the Jezebel post about it, though. Instead of celebrating their corrupt and poisonous ideology claiming another victim, they instead whine and complain about “internet attacks against women” not getting equal consideration. These bitter harpies can’t stand one single story not being about vagina.

On Friday morning, the FBI announced they’ve arrested the person responsible for the tweet. The FBI (and local law enforcement agencies) can’t seem to address violent threats against women online, but this investigation was opened and shut within three months…

The investigation into Eichenwald’s alleged harasser, then, took just three months from start to finish. But women game developers, journalists, and others who have received death threats on Twitter and other forms of violent harassment—some of it spilling over into actions that threaten their physical safety—haven’t been afforded the same access to speedy justice.

They’re even more insufferable than Eichenwald is. OK, I’m not sure. But it’s close.

UPDATE: If this is true, then wow. Just more reason you should keep your mouth shut and not give an inch when people like Eichenwald start getting the cops and courts involved.

Oh, and here’s an link the the Jew Goldstein Legal Defense Fund if you’re inclined to help him out.

MORE: Here’s a letter from the Department of Justice on the arrest… 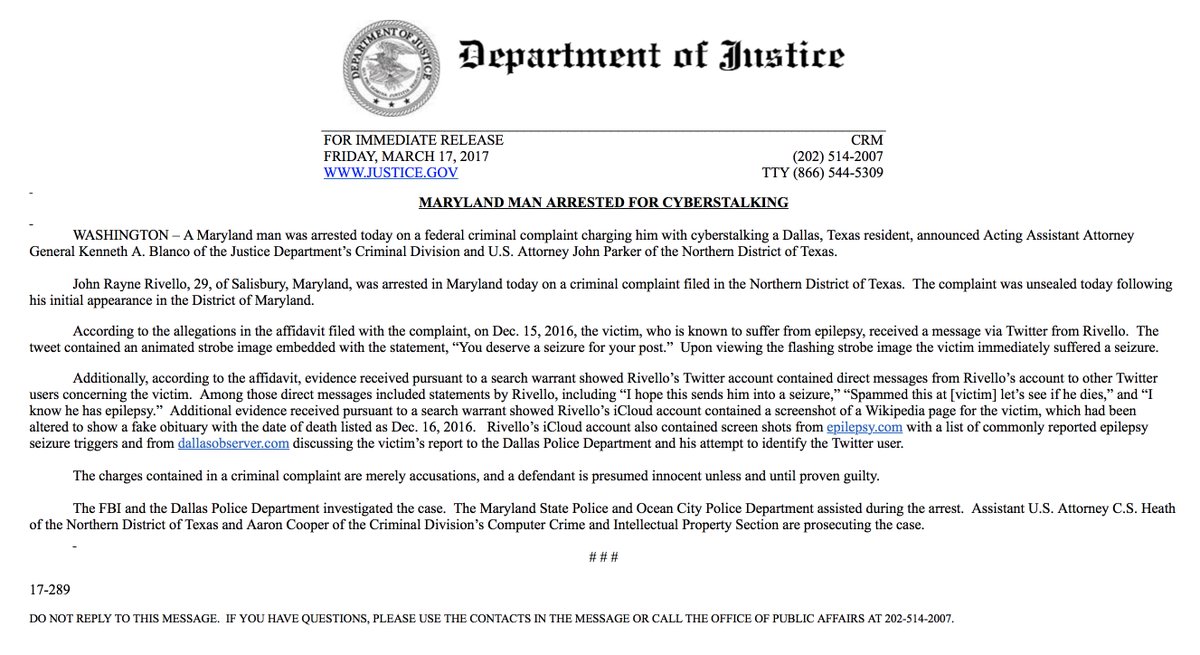 Also, a little background on the type of person Kurt is…