A couple days ago, I brought you personal testimony from John Szczepaniak, regarding his dispute with Agness Kaku, and the big players in the SJW media . His story was compelling, but like I said then, it’s still just allegations. But, we didn’t give you all the details, such as the letter that was sent through an IGDA mailing list. I looked this up personally, so it’s definitely legitimate. My colleague Neirdan also found some interesting tweets from Ms. Kaku. So we’ll have a look at those as well.

Before I lay out the comments from Kaku, I want to mention that I interacted with her on Twitter a couple times. I thought she might be angry about me running John’s side of the story, but she didn’t seem to be. She offered to answer any questions I had. I told her that I would love to have her come here, and lay out her side of the story. That offer still stands. Some of these tweets arguably portray her in a negative light, so I hope she doesn’t hold that against us. I’m still more than will to do a story or LIVE show with her response. I’ll even run her response with no commentary at all, if that’s what she wants.

Now, on to the comments. I’ll post her IGDA email afterwards. The tweets are not in chronological order. 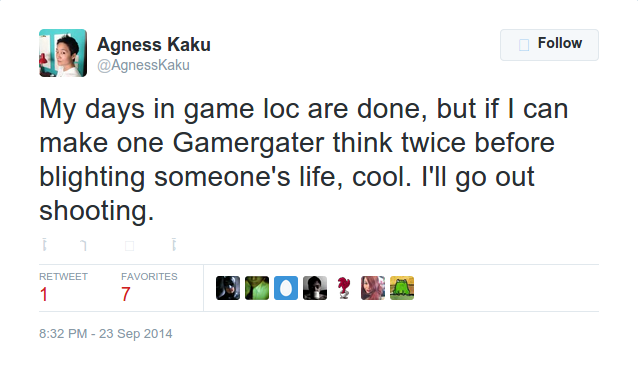 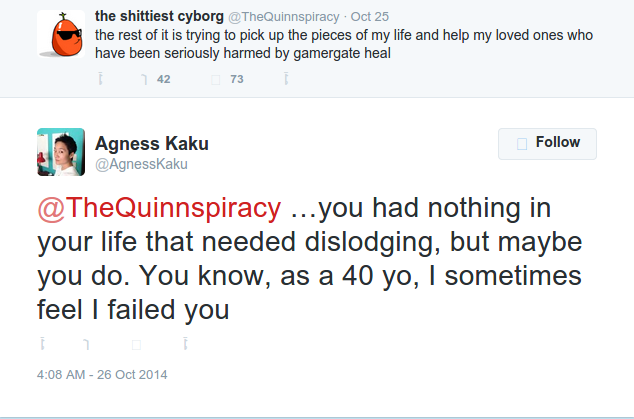 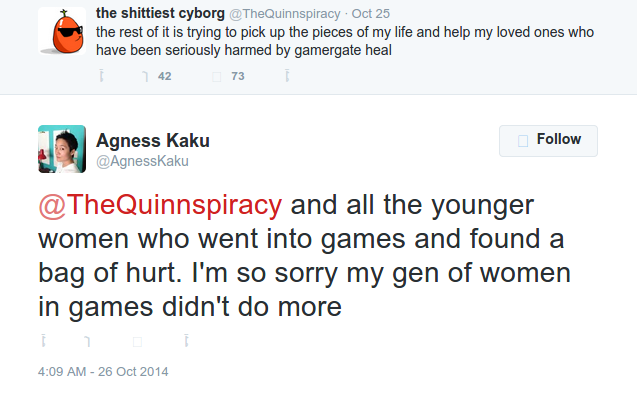 Short break, reminding you that there are a shitload of pictures in this post. I don’t want to comment on the tweets like I normally do, since I’m reserving judgement. 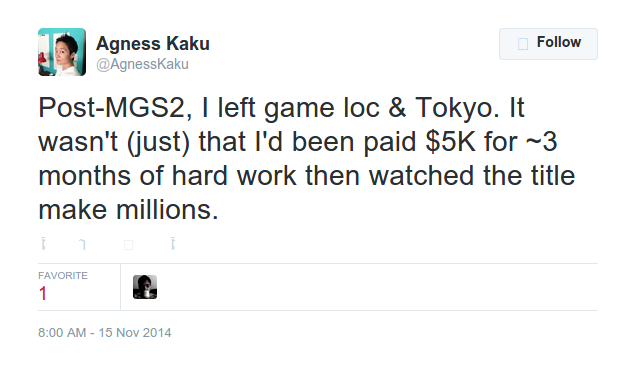 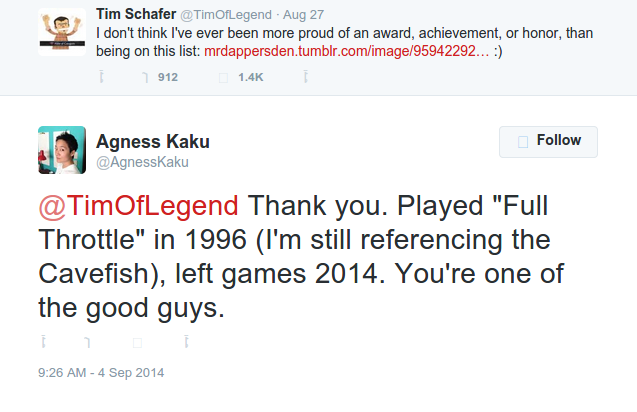 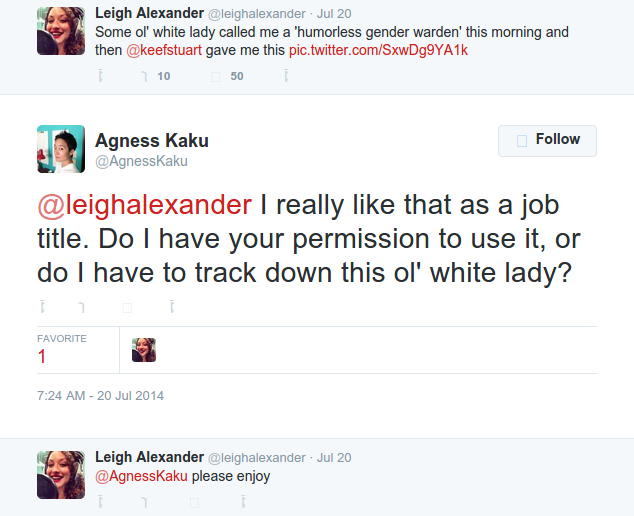 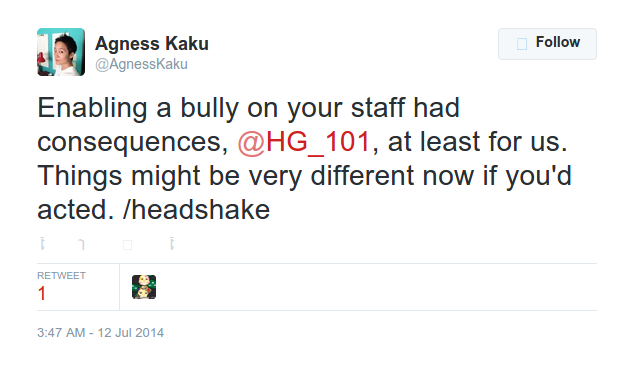 My name is Agness Kaku. I’m a writer. I was also game localizer until the 6-month defamation campaign by John Szczepaniak effectively ended it. Some of you may remember me from the Katamari Damacy series or Metal Gear Solid 2.

I don’t know most members of this group; I assume many assume that what’s on “The Untold History of Japanese Game Developers” updates is true. You’re far from alone. In the 5 months we tried to resolve things privately, the libel went to the top of all our Google rankings. It spread to mailing lists. According to the last “uphate” as I’ve taken to calling them, John has also been emailing one of my clients for 2 months in a bid to get me fired from a contract. He may yet succeed, and take away the last of my consumer titles.

On April 18, John was served with summons for criminal libel at his
parents’ home in a French town of 500 people. I said “his parents’ home” but it’s also his home. John Szczepaniak is 29 years old. He has been out of school for 11 years and has only held a job for 3 of those, only 6 months of which was at a game magazine. Most of his bylines are at a non-paying publication. All this is publicly-available information. He told me that his parents pay for everything and that he wanted to dedicate his book to me since he “[doesn’t] have a girlfriend.” He speaks almost no Japanese.

It’s ludicrous to think that this man could manage a very large interviewproject involving dozens of people in multiple Japanese cities.John’s first target and my sister Hanako Abe, on the other hand, has beensupporting herself for over 20 years as a J-E interpreter. Hanako has an MA in Conference Interpreting from MIIS and another in International Affairs from Columbia University’s SIPA. She was one of the deposition interpreters for the Apple vs. Samsung suit and was the former FBI director Louis Freeh’s J-E interpreter during the MF Global bankruptcy process.

It is ludicrous to think this woman would pimp unqualified interpreters toa client or steal $200 in booking fees.

My sister and the other defamed interpreter, Haruko Ota, belong to a highly professional industry that has offered them nothing but support. To other interpreters, there is nothing entertaining about the sight of a colleague falsely accused of fraud, intimidation, breach of contract. They fume at the fabricated quotes, the cherry-picked audio, the misogynistic language. They know that it could easily have been one of them.

Seventy percent of my work was in games. There’s been little support but a lot of vitriol, silence and disavowal. I’ve lost work. I’ve lost ‘friends’ who are uncomfortable or even afraid to associate with Scandal Girl. Their discomfort makes them shy away, and their coldness makes me withdraw further. Looking through the list of Kickstarter backers and their comments made me physically ill; I came down with shingles while writing up the impact document. Sony. Longtail. Activision. “Noted on the Kaku sisters. I shall warn everyone about them.” “I’ll help…by creating enemies in my games
called ‘Kaku sisters’, and you’ll be able to kill them as many times as you want.” “Is there anyway or a forum to flag these people to keep them away from other victims?” “It makes me sick that people would be that low.”

I think there is a desire among game localization people to believe, this can’t possibly happen to *me*, SHE’S the problem, musta done something (even though SHE didn’t even work for John). Those who know me know that I am hard on myself. And yet, this is one of the few times when I can say, I did *nothing* wrong to this person. I was helpful and kind to John Szczepaniak. And having read through the email and SMS archive, even listened to an audio recording, I see nothing but professionalism in the way Hanako Abe handled a painfully callow client. http://bit.ly/1jQ4z6D

The sleep of reason does produce monsters. The lies are John Szczepaniak’s, but this sharp-toothed libel has many fathers. Game localization people frequently complain about not receiving enough respect as professionals. How can you expect others to have respect for you when you have none for your colleagues? When the industry has no will to enforce a basic standard of behavior? To come to the defense of one of their own, for reasons of principle? This *can* happen to any of you. The part of me that lives in this lawsuit wishes it would. The part of me that left games once before just wants to keep walking and never look back, not even in anger.