Jeff Holiday is a bitch. I don’t think that’s exactly breaking news, but I thought I would reiterate the point.

Shortly before I left for my mandatory vacation last summer, he came onto my YouTube channel and had a confrontation with me over MundaneRatt. Yes, he was actually white knighting for Matt Jarbo. I’m assuming the two of them had some sort of homosexual liaison, given some of Jeff’s comments on the stream (admitting to taking it up the tailpipe, etc). Either way, I just thought it was weird that some guy I had never had any interaction with decided to go nuclear after I replied to one of Jarbo’s inane attacks in an acidic way. Now that I’ve caught up on some of the stuff that went down in my absence, I don’t think it was weird at all. They were probably sitting in some seedy Discord chat trading sexual fantasies when my incoming tweet ruined the role play.

But while the stream itself was mainly just two guys yelling at each other, with a gay sex joke thrown in by me here and there, one notable part came towards the end. Mr. Holiday mentioned his love for Mr. Metokur and then goes on to suck up to him in the most obsequious way. I noted on-air that Metokur would likely laugh at Jeff’s cringey persona, just as he laughs at pretty much every other cringey thing on the internet. Holiday wasn’t having it, eventually leaving the show without conceding the point.

While I was gone from my post, however, Metokur confirmed my suspicions.

Jeff went on to scrub that tweet, along with many others, according to my wife Nora. I will tell you that one of the biggest laughs I had during my eight months of “downtime” came as a result of this episode being relaying to me over the telephone. In fact, the whole reason for the last 300 words was just so I could relive it again. I guess it also acts as a kind of setup for the video I’m about to link you, which also concerns Jeff Holiday.

Here’s Andy Warski ripping him a new (bigger?) asshole over comments he made to him on, once again, Twitter. That’s basically the best appeal of the platform, by the way. It’s really handy when it comes to creating drama and enmity.

Here’s Jeff, or Jeph, as I have recently seen his name styled, assuming his classic holier-than-thou posture. And as is usually the case with him, he’s being disingenuous. 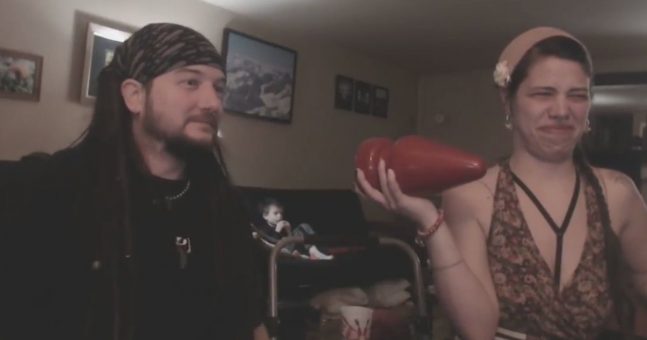 As I think is clear by now, I don’t like Jeff Holiday. But I do feel sorry for his kids, and not just because of this incident. In the grand scheme of things, I think seeing an enormous sex toy at a small age isn’t going to do any lasting damage. At least, I hope it won’t. However, having a dissembling, burned-out, nappy-headed dumbass for a father will indeed make life tougher on the kids.

I, for one, wish them the best of luck in their future endeavors. With a father like Holiday, they’re going to need all the help they can get.