Well, I’m back…late as usual. I’m still going to address the happenings with Matress Girl and the crazy Mustafa chick from the UK. But first, we have to talk about our old friend Anita Sarkeesian. I also have to go mail some shit, but that’s another story. Anyway, let’s get to Anita before the post office closes.

Here she is back in 2011, before she got to be well known. It seems Anita has some interesting views on segregation: 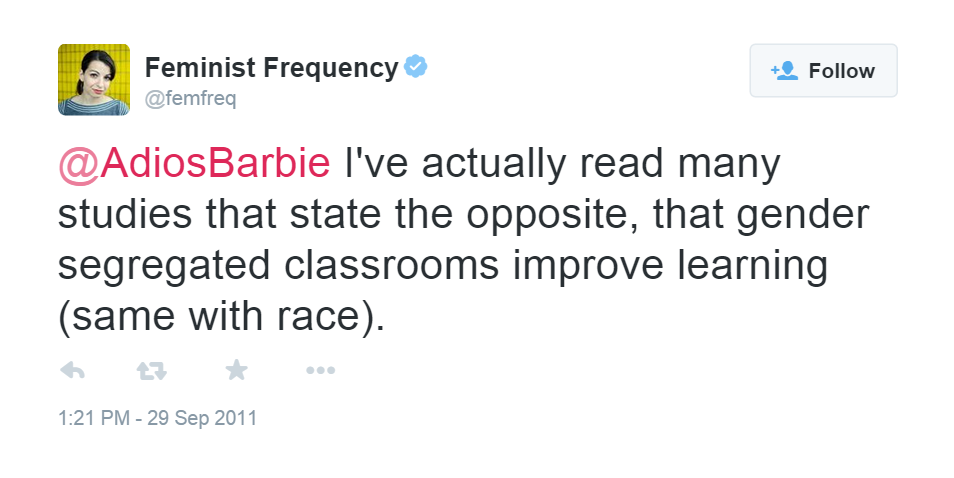 Is that right? It looks like she would have found a home among some of the notorious racists of the past. Is the type of person Intel wants to do business with? Imagine if they had Milo or me talking like this. They would grab onto it and call us racist for the rest of our days. So why shouldn’t Anita Sarkeesian be held to the same standard?

I know the rad fems will have all kinds of excuses. Anita and her puppet master probably won’t address this. Whenever they have a really bad bit of information come out, they usually ignore it. But we’ll see if the corrupt journos have enough spine to raise this with her themselves. As I always say, I wouldn’t hold my breath on that one.

I’ll be back in a bit. Go ahead and sound off on this craziness down below.