Anita Sarkeesian is Who We Thought She Was: A Fraud (UPDATE)

This morning, a very important article came out about Anita Sarkeesian. No, not the suck-fest that Bloomberg Businessweek put out about her, which was complete with a ridiculous cover portraying her as a video game heroine. I would have to be on actual heroin before I believed it. However, some people are either really fucking stupid, or they just don’t have the time to research every issue, and form their own opinions. So they recite whatever garbage the mainstream media is peddling that week, and call it a day. It sucks, but that’s the attitude we’re up against. Luckily, not everyone is an unenlightened and incurious bird-brain. Thus, we have GamerGate.

But the media still calls Anita a champion of women, and basically says you’re an evil piece of shit if disagree with her lies and distortions about the video game industry we all grew up with, and love. As we know, Sarkeesian only latched onto it in order to make a quick dollar. She’s admitted this herself. She’s a charlatan, an influence peddler, and a gender hustler, all rolled into one package:

Anyways, she’s a phony. We’ve always known that, but we’ve lacked some good dirt. Until today. Like I was saying, I woke up this morning. Eventually, I got around to reading Brian Whittemore’s DEEP investigative piece on Anita. To say I felt vindicated, would be an understatement. She’s the fraud we always thought she was. Now, we have the proof. I’ve read a litte about this before, but Whittemore lays it out beautifully.

Short version? She used to be in business with a conman who tried to teach men how to trick women into fucking them. What? That doesn’t sound like the feminist ideal to me. Maybe Jezebel can shed some light on it, but it doesn’t seem very consistent with their rhetoric.

So, she coordinated seminars where a guy called women sluts, and they went around making money off this trash. But the media hasn’t said one word about it. You wanna know why? I bet you most of them don’t even fucking know about it, because they never even took the time to look into this faker’s past. There might be one or two old school guys who knew, but the profession is so shit now, that most journalists are  just Listening and Believing.

Anita Sarkeesian is the fraudulent piece of scum that we thought she was. Yea, scum. Because only scum would try to latch onto an industry they don’t even care about, one that brings joy to millions, in order to turn a cheap trick.  The mainstream media is still not gonna report on this. I can guarantee you it won’t be seen on Kotaku. MSNBC won’t have Whittemore on to discuss his findings. We’ll just have to spread this around to our gamer friends, and anyone else who wants to take the reality pill. You’re not gonna win this one, you scammer.

You know what I'm most thankful for this holiday?

Anita Sarkeesian being exposed for the fraud we always knew she was. #GamerGate

UPDATE: If you haven’t read it already, do yourself a favor, and read the most comprehensive takedown of Anita to date, courtesy of @Nero.  Here’s a screen from it below, but you really need to read the whole thing. It’s amazing. 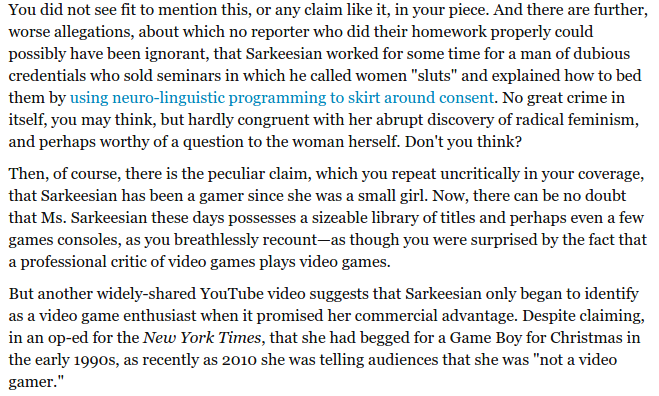