A new study has come to light today, and it totally destroys Anita Sarkeesian and Jonathan “Jihad” McIntosh’s house of lies. For years they’ve claimed that exposure to games with scantily clad or promiscuous female characters causes real-life sexism against women. Anita is on the record with this in a script that McIntosh either wrote or collaborated on. Leaving aside the fact that this sounds like two prudish assholes trying to enforce their sex-negative vision onto the masses, it was always suspect to me. Most people are capable of separating fantasy and reality. This research seems to go a long way towards proving just that.

Here’s some excerpts from the study itself, starting with a section from the abstract:

Enlisting a 3 year longitudinal design, the present study assessed the relationship between video game use and sexist attitudes, using data from a representative sample of German players aged 14 and older (N = 824). Controlling for age and education, it was found that sexist attitudes— measured with a brief scale assessing beliefs about gender roles in society—were not related to the amount of daily video game use or preference for specific genres for both female and male players.

The APA Task Force on the Sexualization of Girls suggested that media, such as television or video games, can shape and affect beliefs about and attitudes toward gender roles in society. Cultivation theory posits that long-term exposure to media content can affect the perception of social realities and the attitudes toward those. More specifically, it assumes that the perceptions of social realities become more similar to the way these are portrayed in the media, the more heavily the medium is used. These so-called first-order cultivation effects that relate to an individual’s perception of reality are assumed to be complemented by second-order effects relating to personal beliefs and attitudes. Cultivation theory has been widely used in research on the effects of mass media. A recent literature review found more than 500 published studies that used cultivation theory. Despite the criticism that the theory has faced over the years—including the debate over whether it can actually be called a theory—it still ranks among the most popular theories in communication and media research.

Just what is cultivation theory, you ask?

Cultivation theory is a social theory which examines the long-term effects of television. “The primary proposition of cultivation theory states that the more time people spend ‘living’ in the television world, the more likely they are to believe social reality portrayed on television.” Cultivation leaves people with a misperception of what is true in our world.

Developed by George Gerbner and Larry Gross of the University of Pennsylvania, cultivation theory derived from several large-scale research projects as part of an overall research project entitled “Cultural Indicators”. The purpose of the Cultural Indicators project was to identify and track the “cultivated” effects of television on viewers. They were “concerned with the effects of television programming (particularly violent programming) on the attitudes and behaviors of the American public.”

As you can see, it originally focused on violence and television, but has since been brought into gaming. The authors of the study don’t seem to think it applies, though:

My former adversary Liana K wrote a piece back in February that had a pretty good section on cultivation theory:

The last important thing to note about cultivation theory is that it doesn’t claim television shapes behaviour. It claims television shapes perception of social reality. For instance, studies were done of schoolchildren, and they found that the kids that watched the most TV thought the world was more dangerous than the kids that watched less. The thought was that television cultivated the idea that the world was scarier. This was referred to as “mean world syndrome.”

I repeat: watching television made people more afraid of violence, not more likely to commit violence. Television doesn’t figure into predicting criminal behaviour, nor does it turn people into Sherlock Holmes.

Extrapolated to sexism, this would mean that viewing sexist material would make people believe the world is more sexist, not turn men into perverts. The implications on Feminist Frequency’s theories on that point alone are significant. If true, the concern shouldn’t be that sexually violent or objectifying content is going to make consumers mimic these behaviours. The concern should be that this content makes people more afraid of rape, abuse, and second-class status because our entertainment is cultivating this mindset.

This is a very valid concern. Excessive fear will hold back entire portions of our society — in this case, women. But our current approach has not been fear reduction.

For example, Anita Sarkeesian does talks where she displays horrid, vicious tweets and emails she’s received. According to cultivation theory and mean world syndrome, if exposed to heavy doses of this messaging, her audience will become more afraid that they too will be attacked. If Sarkeesian is cultivating fearful attitudes through repeated, systematic exposure to vicarious abuse, this is, to borrow the word, “pernicious.”

For the record, I’m not saying she should be muzzled from talking about her experiences. I’m just applying the theories Feminist Frequency uses to their own work.

You can see that Anita has been thoroughly discredited yet again. The study itself is a stunning rebuke of everything her and the scumbag SJW army have been claiming for years. But watching them today makes me convinced that they are going to try to slither out of this. Take a look at Leigh Alexander’s drunk ass, blatantly lying about the positions her side has taken: 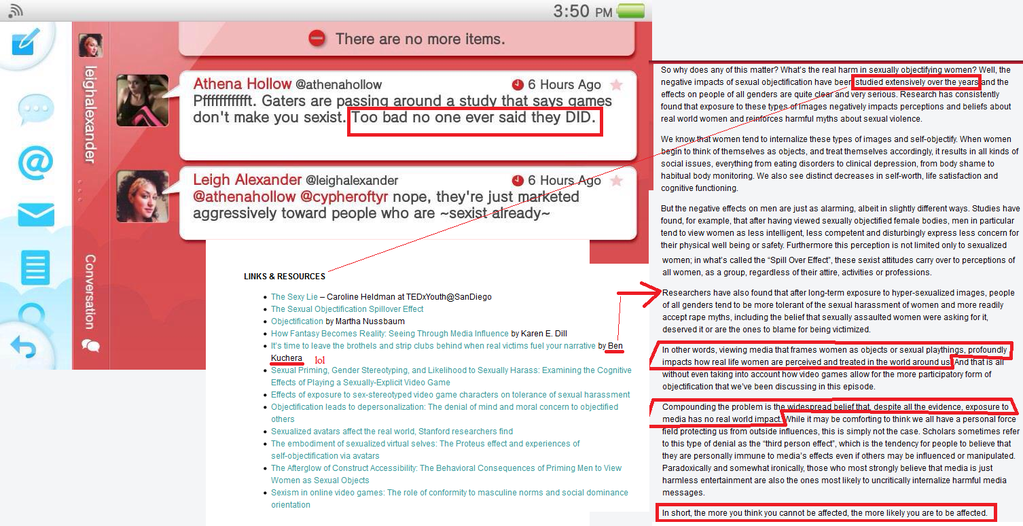 They can try to wiggle out of this, but anyone who looks at the evidence knows that their “gaming causes sexism” talking point is now thoroughly debunked. I can only imagine that more reports like this will be coming out in the future. The SJWs certainly won’t stop with their lies and scams, since that’s how they make a living. But they won’t be able to outrun the evidence forever.