I’m not gonna do any April Fool’s Day jokes today. First off, I just did the fake retirement a few weeks ago. Second off, I’m too lazy to think of a gag that wouldn’t suck, so I’m not going to try. Instead, I’m going to do a late night news jamboree in honor of April 1st. There’s a few stories I wanted to talk about, so I’m about to hit them all in this one article. Let’s begin.

First up is Ars Technica. They’ve been anti-GamerGate throughout the last eight months. So it’s not exactly a surprise to see them spinning against us. But still, you would think they would have some standards. OK, I’m being generous. After all we’ve seen, you wouldn’t think that. Instead you would expect exactly what we got yesterday, which was them throwing us into a completely unrelated swatting story:

Next up is a comedy piece that you might have missed. As it turns out, Alex Lifschitz allegedly has a tramp stamp. I don’t really have anything else to add, as I think that’s funny enough in and of itself. Here’s the footage…it’s not an April Fool’s joke. I just didn’t think it was worthy of a full story haha: 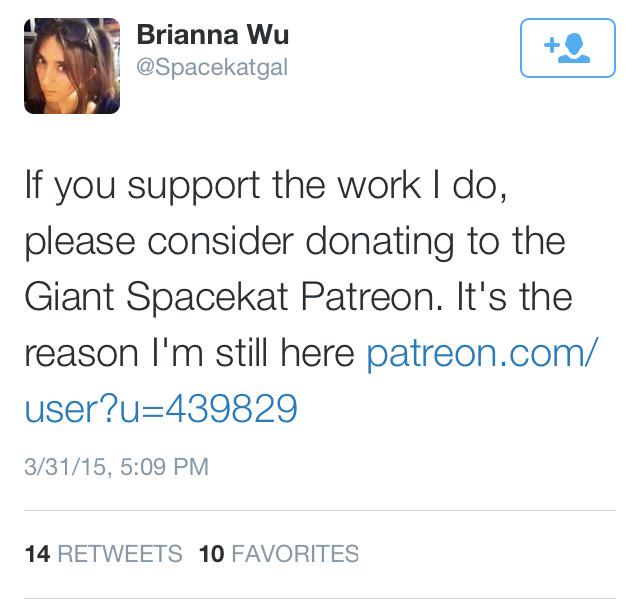 What else is going on? Oh yea…in the United Kingdom (where we have a lot of readers) teachers have started to report parents who allow their kids to play mature video games. This goes against everything I was raised to believe. If your parents let you watch R-rated movies, like mine did, I think that should be fine. I was always able to play whatever vgame I wanted growing up as well. But my parents made those choices, not me. Letting the government creep in this far is a terrible mistake:

Head teachers in Cheshire have warned parents they will report them to the police if they allow their children to play games rated for over-18s.

The BBC reports parents from 16 schools in the county received the letter from the Nantwich Education Partnership, with games like Grand Theft Auto and Call of Duty singled out for focus. In some cases, parents could be found guilty of neglect.

Several children have reported playing or watching adults play games which are inappropriate for their age and they have described the levels of violence and sexual content they have witnessed: Call Of Duty, Grand Theft Auto, Dogs Of War and other similar games are all inappropriate for children and they should not have access to them,” the letter said.

“If your child is allowed to have inappropriate access to any game or associated product that is designated 18-plus we are advised to contact the police and children’s social care as it is neglectful.”

Here’s a few more links to stories that have been on my radar. Also, be sure and check out the subreddit (if you haven’t given up on Reddit lol).

That’s all I’ve got for you at the moment. I’m about to go work on a couple things, including some stuff for the wrestling site. Hit me up down below if you want to alert me to an interesting (or funny) story. Thanks for reading.