The Internet is a terrible time sink some days, but I didn’t waste the entire night. At least I have some things to write about. One of them is the nasty display Arthur Chu put on last night. If you’re a longtime reader of this site, I don’t have to tell you what a vile man Chu is. You already know. If you’re just joining us, well, click those links, because I’m short on time. But anyway, the bastard sunk even lower last night. It does appear that he’s found his new calling, at least: race hustler.

To be fair, this is the same guy that ridiculed the minorities of #NotYourShield. So it’s not really new. Maybe it just seems like he’a being more blatant with it. After spending all day spewing hate about the Sad Puppies campaign, he then went after a man’s family:

chu chu train what are you implying pic.twitter.com/X2CAVQnfP4 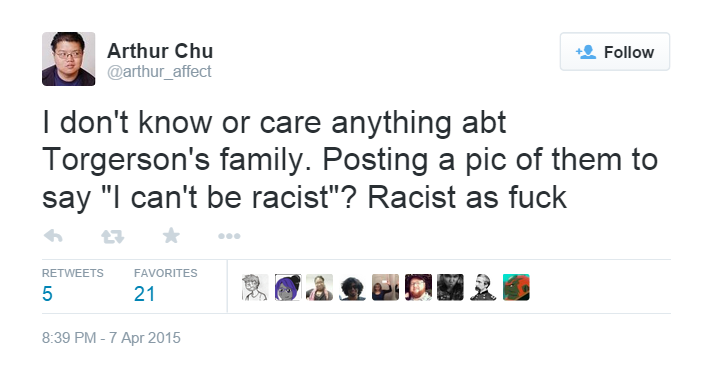 are you implying this man married and raised a child so one day he can use them against some retarded internet manchild's agenda?

He didn’t stop there:

The funny thing is, after this disgusting display, Chu had the gall to claim that he didn’t actually care about whether or not Brad Torgersen was a racist, despite spending an hour or more painting him as one. As usual, Arthur Chu is not a very good liar. Something good did come out of all this, though. We got to see Mister Metokur blow him the fuck out for our viewing pleasure: 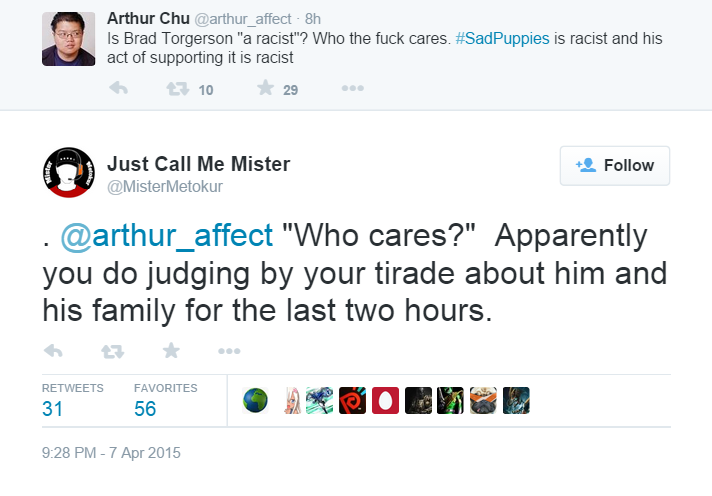 How can people like Chu claim to be arbiters or morality? He just attacked a man’s wife and kid, then piled onto another family for good measure. SJW thought truly does warp the mind. Arthur is in so deep that he will lash out at any target the radical feminist mob marks out for character assassination. There are no bad tactics, only bad targets, as the SJWs love to say. Chu lived out those words last night.