Arthur Chu Reminds Us: It’s All About The Money

Before I go watch some more shit during my weekend binge, I wanted to highlight something from Arthur Chu earlier this week. In case you missed it, the Zoe obsessed freak pretty much admitted that the reason he’s so outspoken against GamerGate, is because all the loads and loads of cash he’s been raking in lately. Someone on Twitter came at me with a suggestion earlier tonight, and this seems to prove it. Their idea was that a lot of these anti scumbags just put on a show in order to get paid. Being against GamerGate was “where the money is,” was how he put it.

Don’t get me wrong, I still think a lot of these people are true believers, Chu included. But one of the main motivators is the desire to get paid. We see that constantly. Brianna Wu thrust herself into GamerGate in order to promote her shit game. Peter Coffin started up some shit to boost his flagging “comedy career.” And Arthur Chu turned things up a notch so he could rise up his newly chosen career path: public intellectual. 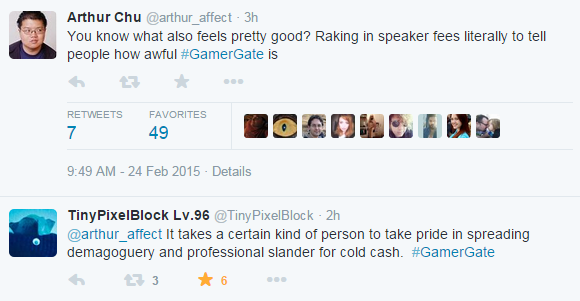 Before GamerGate, all we knew about this clown was that he used a controversial strategy on Jeopardy and went on a win streak. I’m not sure how being a game show champion makes one qualified to be a pundit that anyone should listen to, but this is America. These things happen. But now that he has a nice base among SJW radicals, he can keep pushing his shitty work and it will be OK, because The Clique will promote the fuck out of it. These people have an employment network as well. If Chu plays his cards right, he’s probably got a job-for-life as a SJW mouthpiece.

That is, if they’re still standing when we get done. I understand that this short read about cretinous Chu’s success can get anyone down. Use it as motivation instead. The more we discredit them, the harder it is for their spokesmen like to explain away their extremism. We don’t have the infrastructure they do. That kind of thing takes years to build. We have many other advantages, however, including the fact that most people actually agree with us. We have to hang around, build up our base, and continue to pick away at the opposition apparatus. I truly believe that the authoritarian left represented by many of these radicals is going to fail…but only if we keep up the fight.