I’ve been considering an Arthur Chu follow-up column for a good few weeks. The reason? Even after saying he was done with GamerGate, he’s continued to trash us in the worst ways possible, including trying to tie us to some random trans-teen’s suicide.  I wish I was making that up. He also wrote a rambling piece on bitter nerds, and of course he kept up his usual trolling on Twitter. But this morning, he took his usual antics too fucking far.

To make a long story short, adult performer Cytherea was gang raped and robbed by a group of viscous assailants. Naturally, many in GamerGate wanted to help. Most people naturally want to help others when they see them in fucked up situations like this one. But not Arthur Chu, apparently. But as one Twitter user helpfully pointed out, he has a history of laughing about rape and its victims: 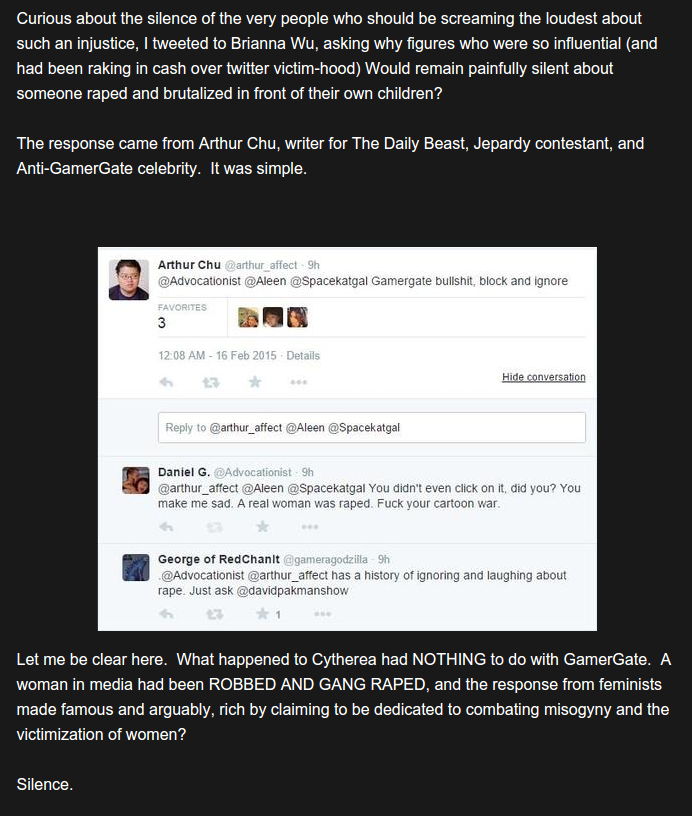 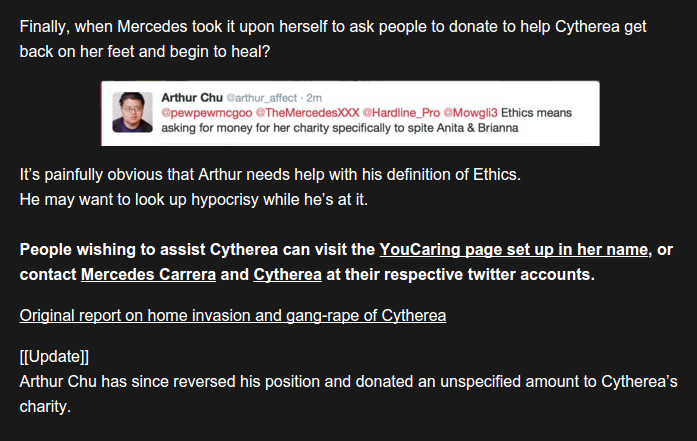 Once he saw how bad this was making him look, he actually tried to donate some money in order to make it all better. So, he accuses GamerGate of disingenuously donating to a charity, and then turns around and does that very thing himself? Hypocrisy, thy name is Chu.

Why don’t you spend time addressing your own issues with rape, Arthur?

Arthur chalks up his lack of conscience to “human nature.” I don’t know about you, but it’s not in my nature to allow rapists to go unchallenged. If I don’t think I can stop them physically, I’ll call the cops. I’m not about to let a woman get raped. Who the fuck does something like that, ever? Not only that, does he think he deserves a gold star for coming out now? He deserves a kick in the face, possibly worse.

I’m gonna spend more time picking apart his bullshit in greater detail on another day, but for now, all I can say is that this guy truly makes me sick to my stomach.