We we last talked about former Jeopardy champ Arthur Chu, he was advocating the doxxing of a vulnerable trans individual. How could he possibly add to this sterling record, you ask? How about comparing our peaceful consumer revolt to a raving lunatic who executed several people in cold blood? Of course, the SJW crowd doesn’t want to consider Rodger a madman, but that’s an entirely different story (and one that I wrote about before any of you ever heard of me) 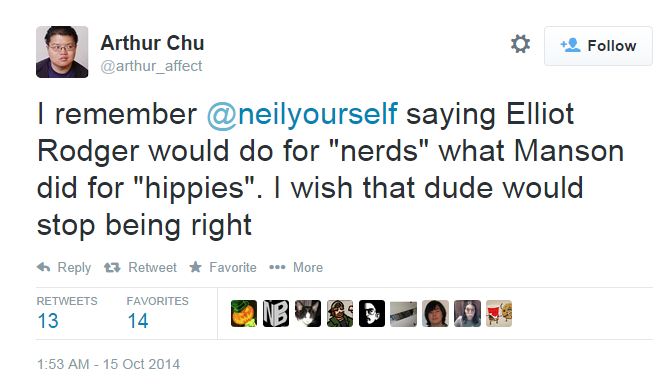 *Chu has also written about it before, and he tied Rodger in with gamers then, too.*

I was taken aback when I saw this on Twitter, but only for a split second. At this point, nothing that comes out of the other side surprises me.  Even still, comparing us to a crazed killer who was on a mission to kill women, is beyond the pale by a good 500 miles, or so. How does a man like Chu sleep at night? I suppose all that Jeopardy loot makes it a bit easier.

Expect more of this type of thing, as their coordinated #StopGamerGate2014 hashtag campaign continues. But they only have their media allies and the useful idiot brigade. The rest of their support appears to be coming from a botnet in the Pacific. Our opponents hypocrisy truly knows no bounds. After spending weeks calling our campaign Astroturf, it turns out their major counterattack is faker than a 3$ bill. You can’t make this shit up.