One of the great things about doing this job is all the cool people I get to meet along the way. Margaret MacLennan is definitely one of those people and she proved again early this morning with an email she sent me. Since it’s literally a casting call for the Hillary Clinton campaign, I thought it would be something you people would enjoy. I don’t know if it will go full-on viral like the post this morning did, but in my opinion, it’s pretty noteworthy.

I mean, if you have to send out casting calls to get people to tell you all about their “inspirational” Hillary stories, I don’t think there’s a lot of genuine feeling behind the proceedings. Do you?

Here’s the notice itself… 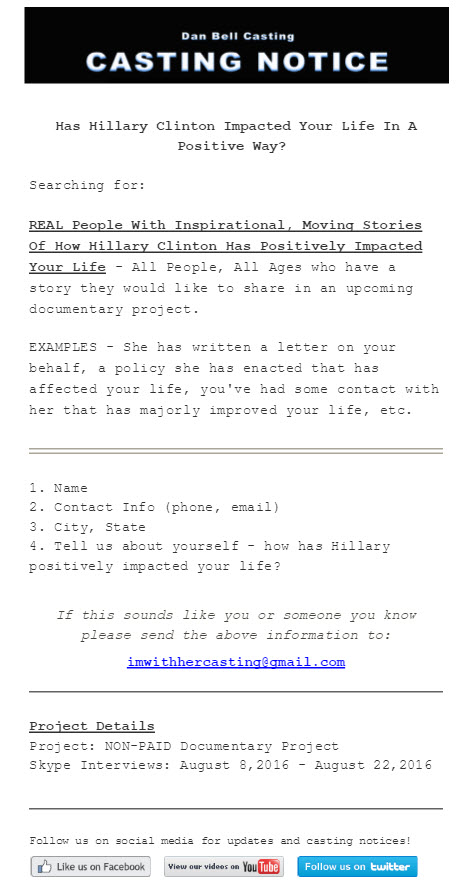 It does say it’s a non-paid documentary project, but there’s the principle of putting out a fucking CASTING CALL to search for people willing to speak for you. I also imagine that actors will be scouting this out as well. Even if it’s non-paid, this is something that a lot of people will see and it might be a good way to get your name out there as a young actor. Whatever the case may be. there’s pretty much a guarantee that you’re going to see a shitload of phoniness in whatever they end up putting out.

Thanks again to Margaret for this tip. Even though I have deal with a ton of assholes, the awesome folks make it all worth it. Oh, smashing SJWs and Clinton corruption also makes it worth it. 😉