Early this morning, I got a direct message from longtime reader @masterninja. He thought I might be interested in writing about a new Los Angeles Times interview with Eli Roth that came out today. He was at San Diego Comic Con promoting his new film, The Green Inferno. But that’s not the interesting part. The hook is, this film is all about lampooning SJW culture, and Roth just came right out and said it today. They don’t call him The Bear Jew for nothing, I guess.

Here’s some of the interview, before I comment and show you some of the deliciousness from Twitter:

Often referred to as #SJW on twitter, these people are (according to Roth) the worst. And should be served up on a platter in The Green Inferno…

Roth: I wanted to write a movie that was about modern activism. I see that a lot of people want to care and want to help, but in general I feel like people don’t really want to inconvenience their own lives. And I saw a lot of people just reacting to things on social media. These social justice warriors. ‘This is wrong, this is wrong, this is wrong.’ And they’re just tweeting and retweeting. They’re not actually doing anything…

So “Green Inferno” is your reaction to the #SJWs of twitter?

Roth: Yeah. I actually wrote it, and when I finished the draft Kony 2012 happened. I was like this is it. Everyone is going, ‘What’s wrong with you?’ They’re drinking their mugs going ‘Don’t you care about child soldiers and kids being raped how can you not tweet this video?’  Everyone got so self righteous and publicly shaming…

But the SJW culture has gotten so out of control. That you feel that everyone, are they doing it because they believe in it? Or do they just want to look like good people?

Whoa, talk about refreshing! He’s just saying most of the same shit we’ve been talking about for a year, but as he notes, it’s been going on a lot longer than that. Kony 2012, damn, that brings back some memories. I actually wrote something on this site making fun of that years ago, but it was lost in one of the host transfers. If I ever recover it, I’ll republish it for kicks. Until then, you’ll have to satisfy yourself with the mountains of SJW salt this movie and interview is producing: 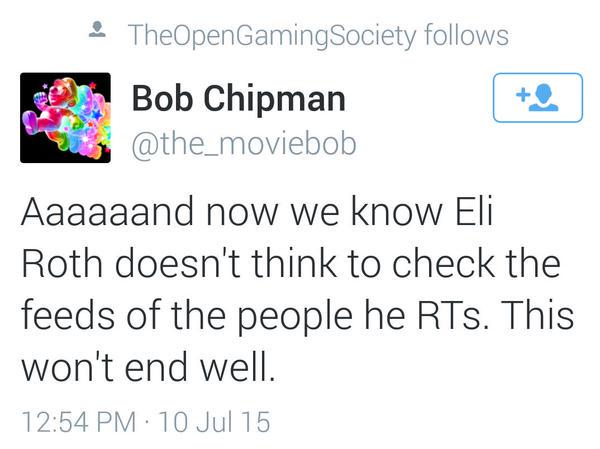 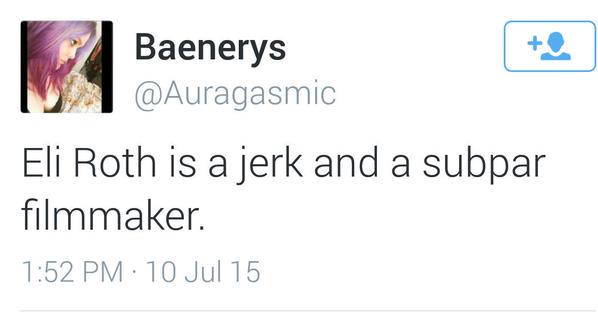 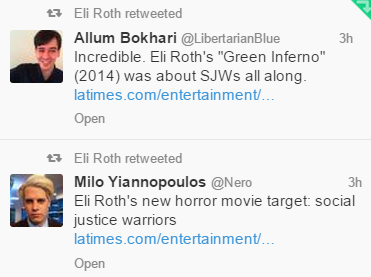 Aaaaaand now we know Eli Roth doesn't think to check the feeds of the people he RTs. This won't end well.

You’re right, it’s not going to end well for you and your cohorts. You guys are quickly becoming a laughingstock, and I, for one, could not be happier. But at least they’re not complaining and trying to stop an artist like Mr. Roth from releasing his work. They wouldn’t try to censor creators, would they?

Of course they would.

Keep shooting yourselves in the foot, radicals. It makes our job so much fucking easier. I’m about to go get some gaming in, but I’ll be back later with new stories, and possibly some updates to this and the Pao entry. Enjoy your Friday night, for those of you here in the U.S. & Canada. For everyone else, have a wonderful weekend.