I didn’t watch the Democratic debate earlier, because, well, I had better things to do…like watch my dog lick his ass. OK, I did follow it on Twitter, which was marginally more entertaining than my dog’s filthy habit. There were a couple things that jumped out at me and they both concerned Bernie Sanders. One of them was Bernie putting Hillary in her place by basically telling her to be quiet because he was talking. This sent the usual rad fem suspects into a tizzy on Twitter. That was great. But the other moment from Sen. Sanders squandered most of the goodwill I had for his performance.

Later on in the debate, while he was shucking and jiving for the black vote (which he will never win over Clinton), he said that whites didn’t understand living in the ghetto or being poor. To say that this is a massive lie would be an understatement. I’m as white as they come. I can tell you with the utmost certainty that I understand what it’s like to be poor. And I’ve known whites who were much, much poorer than I ever was who would probably like to kick him in the teeth right now.

I can’t think of a statement during this entire election season that has angered me as much as this one did. Not only was it offensive, it was also hilariously off-base. There are more whites on welfare and food stamps than there are blacks. Tens of millions of them are below the poverty line. I know he was trying to suck up to black voters, but even they realize this was crazy. 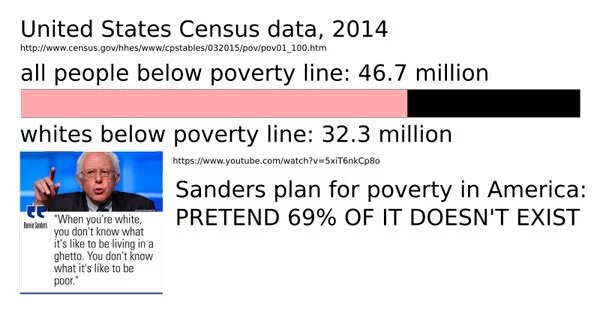 Someone tweeted at me and said I needed to watch the whole statement, so I did. That didn’t make it any better (he even dropped a “current year” reference). He was clearly not referencing anything other than what he said. Yes, I realize that he will try to walk it back. Still, this was a horrible misstep for Bernie, not that he was going to win anyway. In fact, if I’m Clinton, I’d be worried about how this will play with voters if she’s facing someone like Trump in the general election. For this to even be said in a Democratic debate speaks ill of tire party.