If you’ve been following Twitter today on the start of this hopefully relaxing weekend, you’ve seen me and Randi Harper get into it. The funny thing is, I don’t mention her all that much on Twitter. Sure, I write about her here a good amount, but outside of the times she’s flagrantly attacked me or GamerGate, I don’t interact with her. The funny thing is, if I go a time without talking about her, she’ll mention me by name in an attempt to get me to respond. I have to admit, this often works. The other night she said something crazy, and I let it go. Today I felt like responding. It’s good that she started some shit though, because I already had something to post concerning Big Randi.

.@freebsdgirl @Ruderzz @MaleFrequency We don't give a single shit about your corrupt media outlets. You got fired. Deal with it.

Can some1 pls tell me how blue-haired Big Randi (white, female) is a fucking minority? #GamerGate pic.twitter.com/KEGitZMKNp

Enough Twitter fun recap. Let’s get to the actual story. Yesterday, someone sent me some tweets that Randi and certain ABC News employees had made in the wake of the biased Nightline report. To say I was taken aback, would be an understatement. I’m not sure if these have been widely broadcast or not. A Twitter search didn’t show much about these particular tweets, so I figured I would broadcast them here. This shows that ABC staff had the fix in for GamerGate from the start. In fact, I wouldn’t be surprised to find out Big Randi Harper herself consulted on the Nightline smear piece: 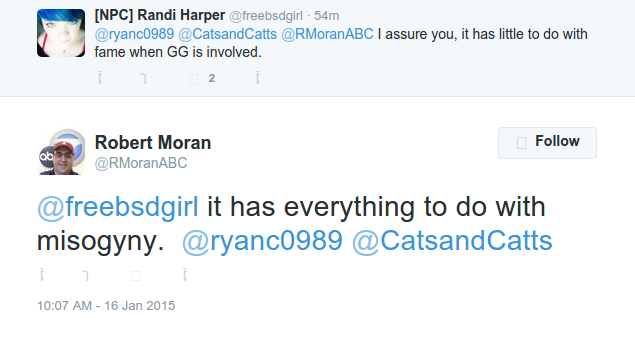 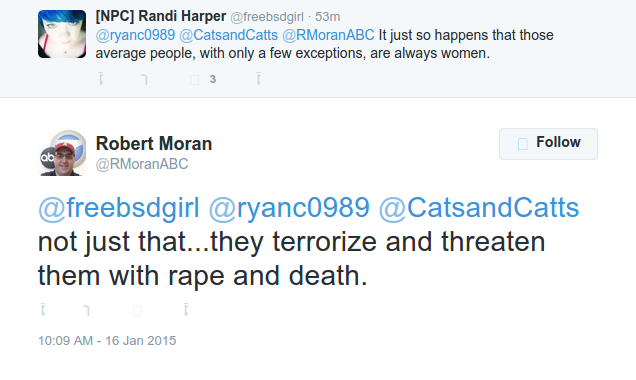 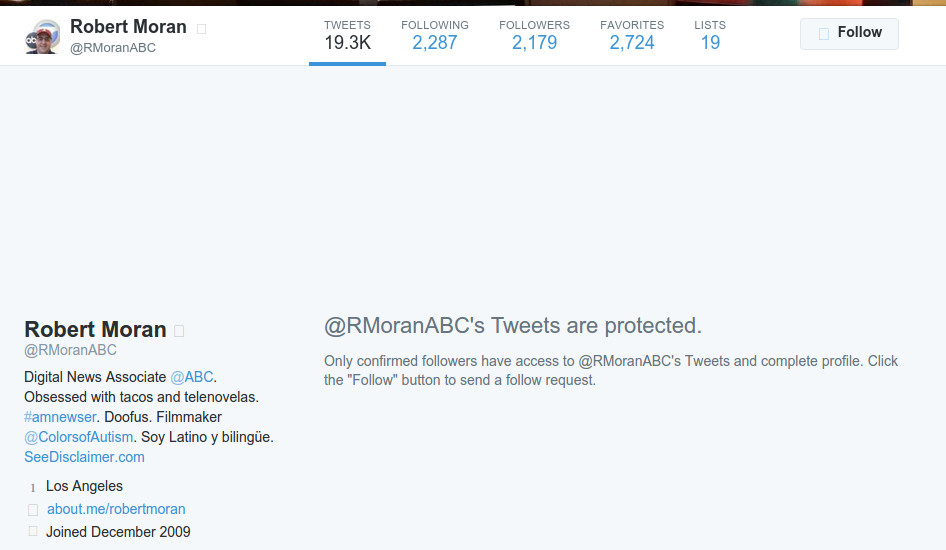 Here’s another ABC staffer trashing GamerGate. It did get coverage from FartToContinue:

So, we have a network that not only aired a biased report, and possibly deleted comments from gamers on YouTube. They also have staffers who went to Twitter to gloat with Randi Harper, and make fun of GamerGate. If that doesn’t show clear bias and unprofessionalism from ABC, I don’t know what does. I’m sure they will sweep this under the rug like every other media organization, but it would be nice if they did a follow up piece with some of our people who have faced harassment (such as @lizzyf620). They won’t do it, but I had to at least throw that out there as a way to save face for them. There’s still a chance to salvage your credibility, ABC.

UPDATE: When I woke up a little while ago, it was brought to my attention that Rick Moran has deleted his entire Twitter account now. I guess he wanted to make sure no more incriminating evidence could be found. It looks very shady.