“Look at all the other ones. They’re all facing left, on coins with some value,” he said, his voice rising. He continued, “Why is it then, that Abe Lincoln is on the penny? Why is he facing away from everyone else? Because he freed us n******s that’s why!” He slammed his fist into the podium, visibly angry, and stomped back to his seat.

That was my freshman year in college and the assignment was for a public speaking class I took as an elective and mostly for fun. Unlike many people I enjoy speaking in front of a crowd and took the class to sharpen that skill. This particular speech, which received uncomfortable silence in response, was awarded an A. As the semester wore on the student gave many such speeches; they were all similar in terms of his simmering anger and all identical in that they related to African American issues, or I should say “issue,” because it was always racism. After class the rest of the students would often meet in the hall where we would discuss our speeches, joke around about the others who stammered or dropped note cards, and then some of us would break off and head to campus center for coffee and continue the conversation. But this guy, he paced the hallway waiting for someone to approach him and talk, but no one ever did.

In the years since I have often wondered if it’s possible he didn’t understand why no one wanted to talk to him. If it’s possible he wasn’t aware his race-baiting anger made the rest of us, who he had essentially just called racists for weeks on end, wary of trying to befriend him.

This is how hugboxes are born. When someone is that angry and when someone is looking to be offended other people don’t want to associate with them. No one wants to be on eggshells all the time, wondering what they might say or do that will get an accusation flung their way. This analogy is apropos for angry feminists, as they exist today, or really any other minority group with an ax to grind. So who, then, do the screaming, angry and perpetually offended associate with? Others that are like-minded, of course, others who will sit around with them and point out the inequities they see everywhere, who will point and shout racism or sexism at the drop of a hat. Others who share their angry world view. These types of people are often labeled disenfranchised but I find that term way off base. They self-exclude themselves from society through their attitudes and accusations. In the end, when they collect together in a like minded hive it’s not through necessity because no one would have them, it’s a choice. And it’s the genesis of the proverbial hugbox.

This story came back to me today as I combed through the tweets relating to Black History Month. 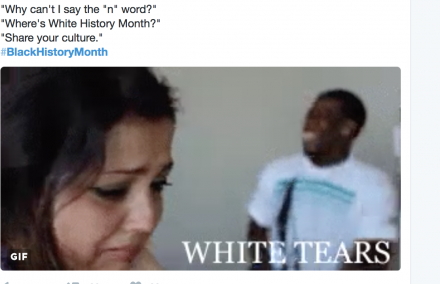 To be sure there were many, many positive messages and a plethora of tweets attempting honor the black civil rights pioneers of yesterday. But strewn through the messages of positivity and remembrance are bitter angry tweets that brought to mind some of my personal experiences and left me wondering: Do events like Black History Month do more harm than good? Does it perpetuate the venomous anger that begets hugboxes and racial tension or does it serve solely as a means of remembering the mistakes of the past so they are not repeated?

It’s not a question we are supposed to ask, of course, and even an innocent exploration of it will make some angry and uncomfortable. The Al Sharptons and Jessie Jacksons of the world will be all over TV for the next month, feeding the flames of the angry and bitter, largely because this is how they make a living. For them this month is a tool for them to generate soundbites and promote the notion that the United States, if not the world, is still a mean and nasty place if you’re black. Neither of them will hold a vigil to remember Madame CJ Walker, a black woman and one of the countries first female millionaires, because there’s no cash where there’s no controversy. As soon as they fail in making today’s youth angry they stop making a living. Because they have succeeded in making a generation of youth furious at events that they never experienced they have perpetuated the hugboxes and in these hugboxes is where they have setup shop and where they make their livings.

I think it’s fair to wonder if this month is coopted by the angry or celebrated by those who have found opportunity. And if we succeed in becoming a country that is truly colorblind, which is ostensibly the goal for the Jacksons and Sharptons, will there come a time when the new generation of African American leaders declares the month no longer necessary?

And for those who have already been made angry at the world, do we stop to wonder how it’s impacted their prospects for success in a country where they truly could carve out a future if they stopped seething for a while?

Later on in life, while working at a now defunct restaurant I encountered another person who, if anything, was even angrier than the student from my college years. He was a waiter, as was I, and in his pocket he carried two notepads. One was for taking orders from his customers, the other was for documenting things he perceived as racist.

For example on one occasion I observed a manager ask him to take out the garbage before he left. Out came his trusty notepad and he said “I’ve noted that I have been asked to empty the trash 3 times this week while the white servers have done it twice. Why is that?” The manager, who cowered in fear at accusations of this nature as people often do, told him to forget he asked and set about emptying the trash himself. Frequently this young man would call the District Manager and show him his notepad of racist events. In it he would document how many times he was given a section in the restaurant that was deemed preferential to work in and how many times a white server was given this section. How many times he was asked to vacuum the floor versus the white servers. And each time he made the call he was taken as seriously as a heart attack. Before long we were subjected to sensitivity videos, closed door meetings were held between managers who had become convinced that talking to this guy for any reason would result in a lawsuit.

In the end we all picked up his slack because everyone was afraid to ask him to do anything. And often, just like the kid from years before, he would stand around waiting for an invitation when the rest of us would gather to grab a post-shift beer together. An invitation that never came. Again, all these years later I wonder how he could possibly think we would want to associate with a him after he went out of his way to point at us and scream “racism” for months. We all imagined that no matter the topic of conversation he would find a way to steer it to something that devolved into an angry screed because this was his historical pattern.

“Did you see the latest episode of…” someone may ask. And ultimately he would say “Can you believe how they treated black characters by….” Every conversation with him, before we knew better than to speak with him, went that way. Nobody wants to spend hours listening to accusations of racism or sexism, so into the hugbox he went.

Eventually he was asked to do something by a new manager who had not yet been warned not to make him work. The task was simply to sweep the walk-in cooler. He protested and out came the notepad. The new guy, not understanding that if he pushed it we would all be watching diversity videos again, persisted.

On his way into the cooler he pointed at a waitress and said “You should’ve make that fat white bitch do it. She never does it,” and he closed the door behind him. The waitress he pointed at said she was going to go help him and calm him down. Now what happened in that cooler is the subject of debate. All we know is that she emerged a minute after she went in smiling and when he finally came out his nose was bleeding. He never showed up for another shift and I have no idea what became of him.

But how could such a young man expect to fare in life with this attitude? And do the people who cultivated this sort of anger really believe they did society a great service? The attitude this young man had is nothing short of a tragedy. He was a smart guy, he could have succeeded in a chosen field had he wanted to. He could have been sitting at the bar having a beer with us and laughing if he wanted to. He excluded himself with rage and vitriol, retreated to a hugbox and, one would assume, hindered his own professional and social growth. That’s the sort of self-inflicted injustice that bears closer examination this month. How prevalent is this attitude? I don’t know. I know it’s not limited to African Americans, I know feminists and other groups have their own hugboxes where the angry mingle and it’s all a shame and worthy of a national conversation.

And I know we are supposed to be afraid to talk about it. We are supposed to ignore the fact that the perpetually offended spew their anger to their own personal detriment. We’re supposed to scroll past the angry “White People Tears” tweets and just think “Yeah I deserved that one” as we are guilted into silence. Forgetting that the men and women behind the angry tweets are hurting themselves and that their attitudes toward the world didn’t pop into existence out of nowhere. They were cultivated and reinforced by a grievance industry that doesn’t care these young people will all eventually retreat to a hive-minded hugbox and miss out on the chance to be happy people with diverse friends and rewarding careers.

None of this is me saying there is anything wrong with having a Feminist History or Black History Month. This is all to say it’s fair to ask how to prevent the angriest and the most outraged from hijacking them. And it essential for the future of a lot of todays youth to ask if its possible to reach into the hugboxes and pluck them out, show them that perpetual outrage and anger won’t lead them anywhere good. After all, looking back on cultural heroes should be a pleasant thing to do and, whether we’re talking about feminist of African American icons, it’s hard to imagine they would want to be honored by people perpetuating anger instead of being remembered as the noble people who worked so hard to sooth it.