Just when I was about to go to sleep, DeRay McKesson’s nasty, sick, disgusting, pathetic ass dragged me back to the keyboard. Someone tagged me in a tweet showing something that McKesson spread on his timeline in the aftermath of the firebombing attack on a GOP office in North Carolina.

And for good measure, my Slack chat caught a screen of it too…before DeRay went back and un-retweeted it:

First off, this chick looks half-white herself. Second off, how disgusting can one human being get? At every turn, DeRay promotes violence and hatred between the races. Very few people get under my skin like this guy does. He literally makes me sick to my stomach every time I check in on his activities. And the media plays it like this guy is some civil rights icon! He’s a piece of shit who deserves every single bad thing that could possibly happen to a person. There’s no telling how many people he’s already gotten killed with his reckless rhetoric. How many more have to die because of this shithead and his incitement?

Oh, and while he did try to scrub that retweet, don’t worry! There’s plenty more where that came from, ladies and gentlemen.

Doesn't the @NCGOP office have insurance? Won't that provide the requisite funds to rebuild the office?

This is the type of response he was getting to this UNABASHED race-baiting, by the way:

It's almost as if that Kickstarter was poorly thought out and was just white people looking for moral superiority.

Several white people tried to tell him how fucked up this line of thinking is, but those crackers shouldn’t bother. DeRay hates them and has no intention of doing anything other than spreading hate.

#BlackLivesMatter is about hate and it starts with people like DeRay McKesson. You want to show me it’s not? Then get rid of scum like him.

UPDATE: Not to be outdone, a wild Jonathan McIntosh joins the fray… 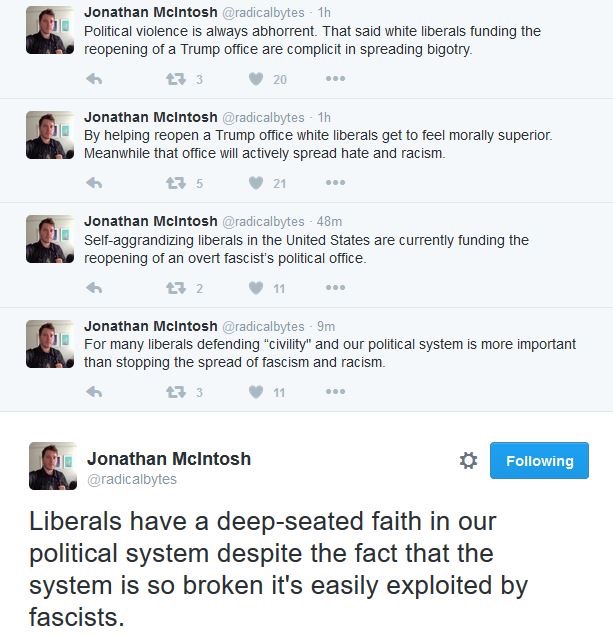