It’s been a little while since I’ve written about Blowey Zoe Quinn here on TheRalphRetort.com. My records show it to have last occurred all the way back on November 7th when I talked about the movie that is supposedly going to be made from her book. We’ll see if it ever gets made, but that’s not what I’m here to talk about. You see, Zoe is up to her old virtue signalling tricks once again, and this time, it could be putting people’s health in danger. I realize that’s not all that uncommon for her, given her penchant for putting strange penis in her radioactive cooch, but this time, she’s gone too far.

In case you haven’t seen it already, check out how she flouts her pollution of the national blood supply. What kind of person thinks it’s a good idea to advertise the fact that you lied in order to give blood? First off, you obviously should always tell the truth to the various blood banks regardless, but doesn’t she realize that this could help make impressionable people think it’s ok to lie about anything else as well? People still get sick and catch shit from polluted blood. Yes, it’s better than it has ever been, but that’s because of the screening process. Ya know, the same screening process that Filthy Five Guys Quinn has decided to take a big nasty shit on. 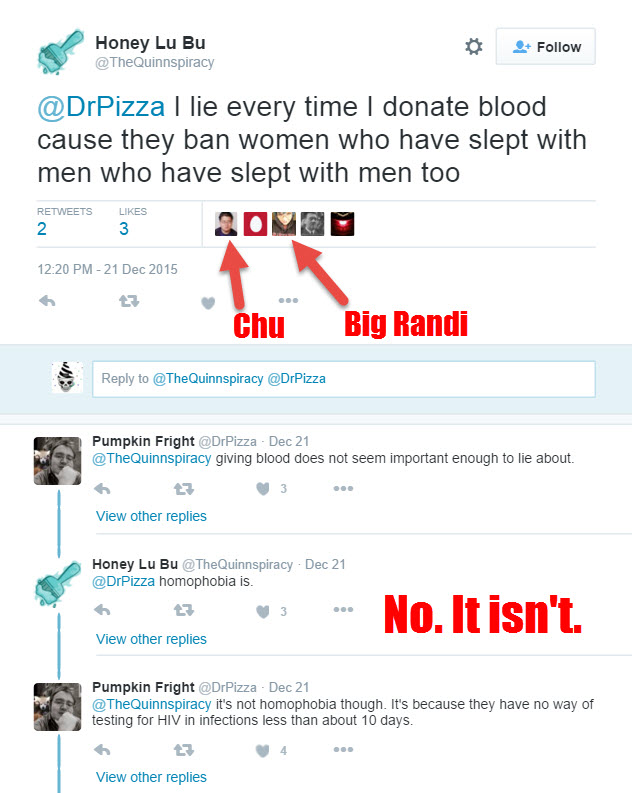 It’s not just me, a shitposting blogger with a hair-trigger temper, saying this. Real-life medical professionals are pointing out how fucking dangerous all this is. I won’t hold my breath waiting for Blowey Zoe to apologize, since she has absolutely no shame. But it’s still good to see her get blown out like this…

@TheQuinnspiracy I'm not biphobic. I AM a PhD in infectious disease and know that there are scientifically valid reasons for the regulations

@TheQuinnspiracy You ignoring them shows an unbelievable level of disregard for the health and safety of others. Be ashamed.

@TheQuinnspiracy No. Listen. Donate blood as much as you want but don't lie to the Red Cross. That's dangerous and stupid.

Restrictions on blood donations are based on stats and infection rates.
They are NOT homophobic.
Lesbian women can donate all they like.

For the record, I have no idea what GamerGate is, and don't care.
I DO care about reducing HIV transmission & keeping the blood supply safe.

She has no dog in the fight, but Melissa knows how important it is to call out dumbass and flat-out dangerous misinformation. Zoe Quinn doesn’t care, though. She’s more interested in scoring some imaginary internet points with her sick and corrupt clique of SJW sycophants. When you really sit and think about it, this may be one of the worst things she’s done. Don’t get me wrong, some of her past transgressions are definitely abhorrent, but now she’s fucking around with people’s health. The one silver lining is that this shows she’s gonna keep making mistakes until one day she starts hurting herself even with the idiots. Her hubris is at an all time high. That’s a good thing. It means she’s more likely to go too far and fuck up soon. When she does, I’ll be there to piss on her grave.

PS: We all know there’s a good chance she never even donated any blood in the first place. Still, that doesn’t really mean anything, since others might be taking their cues from the self-important cunt. I know she doesn’t really care, so whatever. But I hope more people will call out this insanity. We can’t count on scum like Hamburger Harper and Greasy Chu to do it, but surely to fuck someone on that side with some clout could stand up just a little bit?