Bodies Not Even Cold in Lafayette, But SJWs Already Comparing to GamerGate

I’ve been taking it easy on a lazy Saturday, but I have some stuff coming up. We have Day 3 of our comic strip right after this short post. I’ll do a recap of the Hogan drama from the last day, picking up on any new news. I also have some thoughts on the Gawker rebranding that’s apparently coming up on Monday. What else is there? Nothing is coming to mind, but there will be more.

Also, here’s the unplanned stream from last night. We had John Kelly (the idiot who thought it was a good idea to start a GamerGate council) on. He allegedly passed the link to losers, and that was how we ended. But the show was pretty fun regardless. Check that out if interested.

First off today, let’s do a little Twitter hit. The clown below calls himself @SuperSpacedad, and has been around since the fall. I blocked him ages ago, and don’t usually pay him much mind. But, he gets retweeted and keeps the attention of the anti-gamer forces on Twitter. Keeping that in mind, I think it’s appropriate to spotlight his actions here and there…especially when those actions consist of trying to tie GamerGate in with the Lafayette shooting.

I guess he missed the post where I made fun of him yesterday? Nah, he probably read it. I wouldn’t expect those scumbags to be honest.

About the 20th time I've seen them try this. #GamerGate pic.twitter.com/KLb0NuTBGW

Disgusting, but as I said, nothing new. Remember, he’s just taking his cues from the SJW thought leaders: 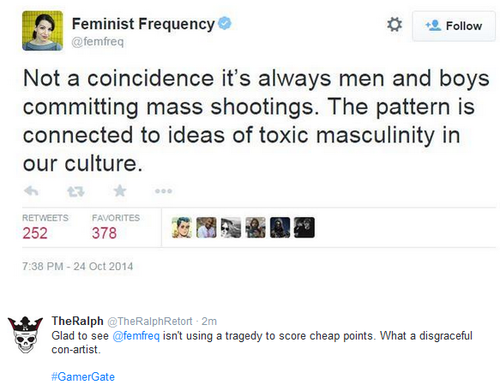 This is just another part of their nasty playbook. They don’t even let the bodies get cold before striking out at ideological opponents. You know, there was a time not that long ago when this sort of thing was looked on with disgust by all quarters. But somewhere along the way, the rad fem bullies and “progressive” posers decided point-scoring was more important than human decency. The culture is worse as a result of it.