EMAIL TO THE EDITOR: Hey, I wondered if I could either post this on your site (as InvestinCatFood), or consider this an informed source and do your own version.

Everybody missed this one. Back in June, just after embarrassing herself on an unrelated Nintendo text, but before celebrating Milo’s censorship at the hands of Twitter, Blowy Zoe, in the words of our host, achieved a milestone: she got dropped by her publisher.

No reasons were given. This was all as quiet as fuck, so I can’t tell you if the manuscript was rejected by her editor, or (more likely) by legal given the risk of defamation. And we can’t just let the salt flow at the thought of her having to return her advance. (This may be known later if somebody like Vox Day of Castalia House hears from his contacts.) But anyway, her publishing career is nearly kaput. 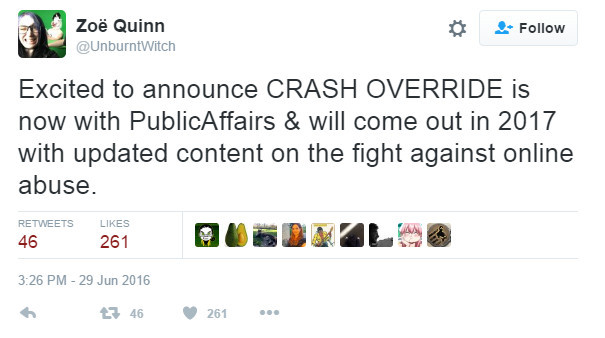 Excited to announce CRASH OVERRIDE is now with PublicAffairs & will come out in 2017 with updated content on the fight against online abuse.

May sound great, and grifters gonna grift. But here’s the thing. It was supposed to be a memoir, published by Simon & Schuster, with a film deal. Simon & Schuster is one of the Big 5—a company with half a billion in annual sales or whatever it is, capable of getting you on the Today Show and The View and NPR and so forth. PublicAffairs, while based in NY, has been in limbo for years.

Short version of this is its parent company went bankrupt a decade ago. The firm was able to stay afloat with injections of capital from George Soros and the like, but was unprofitable and on the market for several years with no takers. It and certain other imprints were bought up cheap by the French conglomerate Hachette, however Hachette was mostly after other titles already published by the firm, sort of like buying a grab bag of comics at a convention for a few prizes you could see therein.

Tedious inside-baseball crap, but, tl; dr: PublicAffairs (her new publisher) ain’t paying her a six-figure advance, and if she goes on TV, she’s paying for her own hotel and Uber fare. They’re not gonna put marketing muscle behind it. The book will do far worse than Michelle Fields’ epic, whose failures the great Mike Cernovich describes in detail.

Any film from it is now a real hard sell for Producer Amy Pascal, the chick who was ousted from Sony and is responsible for Ghostbusters 3.

Just one more thing to give thanks for on this #gamergate anniversary.