.@NintendoAmerica letting Alison Rapp go is despicable, cowardly behavior. You're supposed to better than this. For shame.

Gamergate blamed Alison Rapp for censorship and wanted to get her fired for it… Surely they realize things will still get censored. 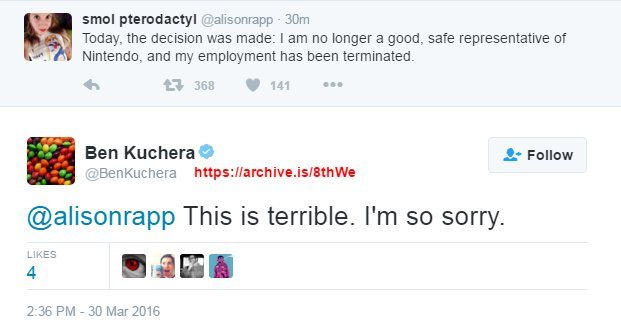 I'm heads down in crunch right now and I don't know what I can say that I haven't said already. Just sad and tired.

Please look out for each other today. I'm disconnecting cause I can't keep reliving this shit and be productive and I can't be the only one

Kotaku is going all-in with the Rapp defense…

We don’t know the full details of what happened, or what the conversations were like between Rapp and Nintendo. It’s possible that Nintendo truly was uncomfortable with Rapp’s college essay, despite it being publicly linked on her Linkedin page, and decided to part ways with her.

But we do know this: Nintendo was publicly silent while one of their employees was harassed and smeared online over something she did not do. That’s a fact. It’s not in dispute. Nintendo watched Rapp become the center of a witch hunt and did nothing publicly to defend her. Despite my requests for comment, the company said nothing. As it turns out, maybe that silence said everything.

The response to Rapp’s firing has been swift, vocal, and mostly negative, even in places normally hostile to outspoken individuals like Rapp. “Nintendo is in the wrong for firing her,” said a poster on the GG-friendly subreddit Kotaku in Action. “Good job guys you fired a person who literally did nothing wrong,” said another on 4chan. (Other posters in both threads celebrated Rapp’s firing, of course.) The Nintendo of America Twitter feed is being deluged with people protesting and condemning the decision, and one indie developer even says he cancelled a game planned for Wii U.

Lol, some KotakuInAction cucks are defending Rapp as well. I wish I could say I was surprised.

Lastly, how is that I'm the only reporter who wrote about Alison Rapp and the attempts to assassinate her character? The media ignored this.

Between @Nintendo letting go Alison Rapp after GamerGate hate and Trump's comments for abortion punishment, today's a bad day to be a woman.

UPDATE: A Mashable report says Rapp was fired because of a second job she held, and not because of past positions. It sounds unlikely, but that’s apparently the Nintendo line…

Nintendo of America provided the below statement to Mashable.

Alison Rapp was terminated due to violation of an internal company policy involving holding a second job in conflict with Nintendo’s corporate culture. Though Ms. Rapp’s termination follows her being the subject of criticism from certain groups via social media several weeks ago, the two are absolutely not related. Nintendo is a company committed to fostering inclusion and diversity in both our company and the broader video game industry and we firmly reject the harassment of individuals based on gender, race or personal beliefs. We wish Ms. Rapp well in her future endeavors.

MORE FROM RAPP HERSELF: