More to come as I get it…

There is a report of a possible active shooter at YouTube headquarters in San Bruno.

Police have not been able to confirm the report. People near the area report hearing shots fired, police activity and lockdown procedures.

Vadim Lavrusik, who was working at that facility, wrote on Twitter shortly before 1 p.m. that he heard shots and saw people running while at his desk before barricading himself inside a room with other coworkers

Active shooter at YouTube HQ. Heard shots and saw people running while at my desk. Now barricaded inside a room with coworkers.

KRON4 is hearing reports of an active shooter at YouTube’s headquarters in San Bruno.

He also heard that a woman was shot and crawled into the Carl’s Jr. next to YouTube.

The headquarters is located at 901 Cherry Avenue.

San Bruno Police tweeted at 1 p.m. to avoid the area due to police activity.

Employees can be seen walking out of the building with their hands up.

Several employees sent tweets saying there is a shooting and that there are victims.

Further details are unavailable at this time. 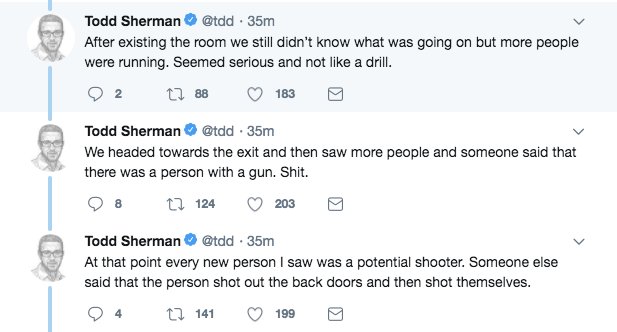 WATCH LIVE: #Youtube employee told ABC7 News it was a "suicide mission and that nobody else was injured." https://t.co/wrYipmia66 pic.twitter.com/W5JHAPQrwa

A female shooter opened fired at YouTube’s San Bruno headquarters on midday Tuesday, authorities said in a press conference. Several hundred employees were evacuated from the premises and multiple victims of gunshot wounds have been transported to area hospitals. The suspect died of a self-inflicted gunshot wound, authorities said.

“A number of patients with gunshot wounds” have been received at Zuckerberg San Francisco General Hospital as part of an active shooter situation at YouTube headquarters outside of San Francisco, according to Brent Andrew, the chief communications officer for the hospital.

While there have been no patients “dead on arrival,” Andrew told The Hollywood Reporter that he was informed by authorities that there were fatalities involved in the incident.

From The Daily Beast:

A federal law enforcement official told The Daily Beast that a woman shot her boyfriend at YouTube headquarters in San Bruno, California on Tuesday. The assailant is dead from a self-inflicted gunshot wound, San Bruno police chief Ed Barberini told reporters. Four people were transported to hospitals for “gunshot related injuries,” Barberini said. More than 1,000 workers are on the YouTube campus, according to parent company Google.