WOW…more to come as we get it.

FBI Director James B. Comey has been dismissed by the president, according to White House spokesman Sean Spicer.

“The president has accepted the recommendation of the Attorney General and the deputy Attorney General regarding the dismissal of the director of the Federal Bureau of Investigation,” Spicer told reporters in the briefing room, according to a pool report.

Earlier in the day, the FBI notified Congress that Comey misstated key findings involving the Hillary Clinton email investigation during testimony last week, saying that only a “small number’’ of emails had been forwarded to disgraced congressman Anthony Weiner, not the “hundreds and thousands’’ he’d claimed in his testimony.

The letter was sent to the Senate Judiciary Committee on Tuesday, more than a week after Comey testified for hours in defense of his handling of the Clinton probe.

So, the false testimony that former FBI Director Comey gave made Hillary Clinton and Huma Abedin look worse than they already did, in my opinion. It’s not like President Trump really cares about those two hacks, so this was likely just used as a pretext to get rid of a man who was already unpopular within the administration and with Trump himself, given his tweet from last week.

Here’s Trump’s letter to James Comey, informing him of his dismissal…it’s epic. 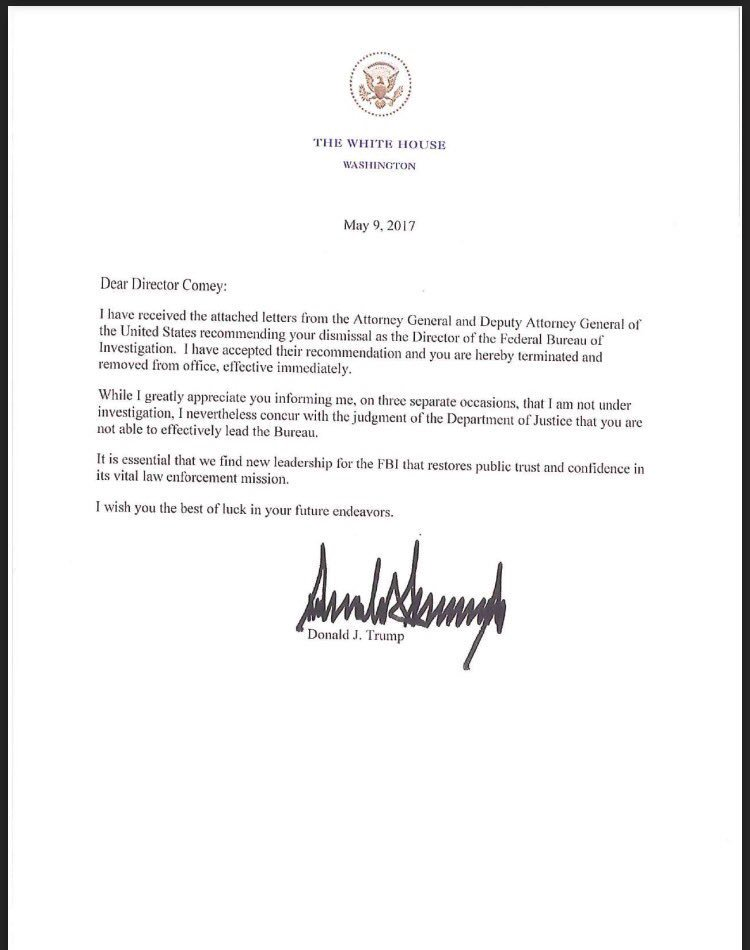 While I greatly appreciate you informing me, on three separate occasions, that I am not under investigation, I nevertheless concur with the judgement of the Department of Justice that you are not able to effectively lead the Bureau. – President Trump in his letter to former FBI Director James Comey

And if you read the rest of the documents associated with this decision, as I just did, the justification for firing Comey boiled down to his poor handling of the Hillary Clinton investigation during last year’s campaign. The funny part about that is, Mrs. Clinton herself, along with scores of other Democrats, have blamed Comey for handing Trump the election with his late letter to Congress about the reopening of that investigation.

The most substantive part of the allegation by Deputy AG Rod Rosenstein against (now former) FBI Director James Comey pic.twitter.com/Cg1PbJAxQy

He just got fired by President Trump over that very issue. Ironic, to say the least.