Really, it’s kind of easy to find stories for the site. Do you want to know why? The other side keeps fucking up daily, often in spectacular fashion. I don’t force them to go on Twitter and reveal their many corruptions and collusions. They do it willingly. Today, we have yet another example. I would link you to some more, but just scroll through the site lol. There are a multitude of examples, most recently with Randi Harper (ok, I did link one). Today, her partner in crime BatWu is on the case, colluding behind the scenes with the people who run Patreon.

On Twitter today, Brianna Wu openly admitted to colluding with Patreon officials in order to exclude Fredrick Brennan (8chan’s Hotwheels) from the service. I’m not sure how many laws that breaks out there in California, but I’m sure that it’s likely several. I hope that Hotwheels and Mike Cernovich take a hard look at their options going forward. 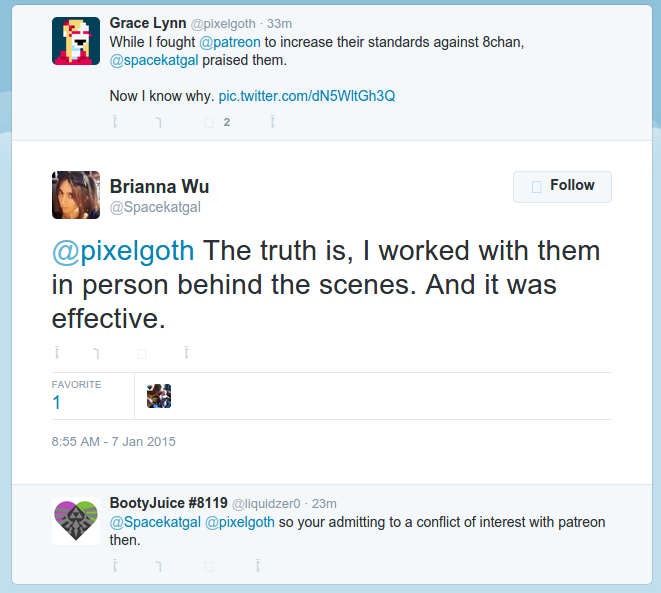 So, we have Wu saying she worked behind the scenes to fuck over but if you’ll recall, she wasn’t the only one:

As I said before, any tool available to these monsters will be used. They tried to get me taken down, and now Brianna Wu and Zoe Quinn have joined forces in an unholy alliance to take away Hotwheels’ Patreon. They want to make it a personal liability to be a GamerGate supporter. It’s not enough to throw slime balls at us on Twitter and in their corrupt comment sections. Your job has to be on the line. Beating us into submission has always been the name of the game. Look at the Intel media blitz yesterday. That was designed to get us down. Well, it had the opposite effect on me. I’ve only just begun to fight. I’m sure Hotwheels feels the exact way, and I’m damn sure GamerGate does.