GUEST EDITORIAL by InformUs In 2015 I signed up for Patreon specifically to pledge to Brianna Wu.
Total
0
Shares
Share 0
Tweet 0
Pin it 0

In 2015 I signed up for Patreon specifically to pledge to Brianna Wu. 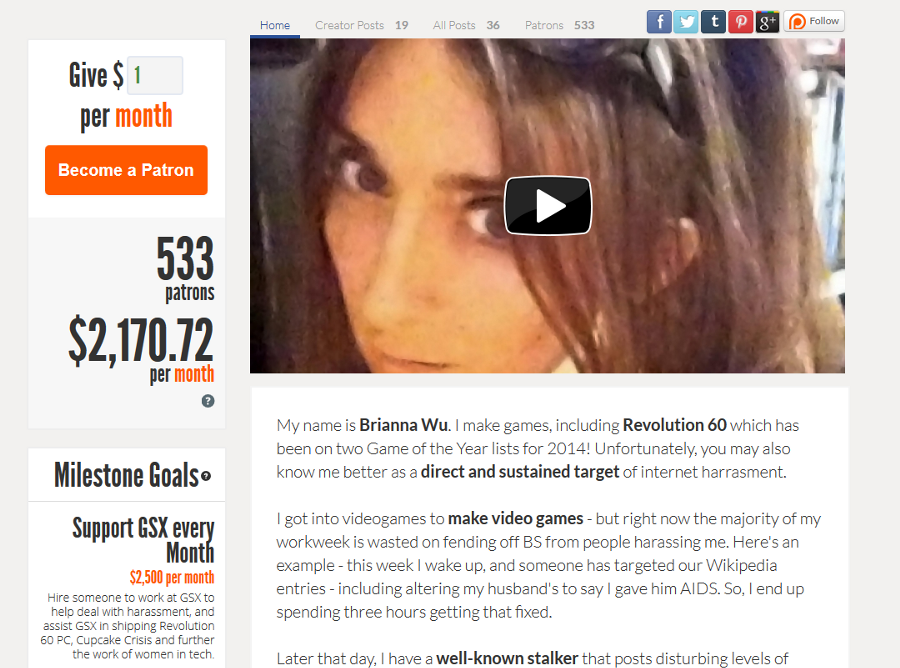 Her Patreon has always clearly stipulated that the money will go to hiring someone to deal with harassment. This seemed like an important and logical cause for me to support. I’d seen her receive harassment as a result of GamerGate, and as advocate for Boston’s tech scene, it was a no-brainer for me to throw in a few dollars. Unfortunately, I now believe that Natalie O’Brien may not exist.. 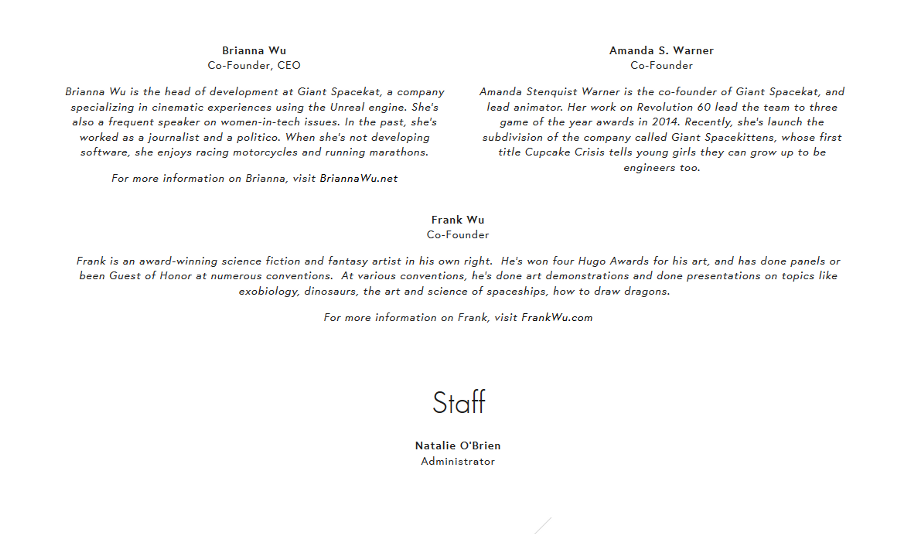 On the official Giant Spacekat website, Natalie O’Brien is currently listed as an administrator. As you can see, there is no description for her. There are no pictures of her, no social media, no information about her anywhere on the internet.

In this article, written by Krystal Wong, Natalie O’Brien is mentioned again as a pregnant woman who she has employed.

A quote from Natalie is included, though interestingly it was given through e-mail. I approached Krystal Wong for clarification regarding if she had ever met Natalie in person or spoken to her on the phone and received no response.

Here again, Wu brings up Natalie as the company’s administrator, claiming that she is the person who runs the twitter account @GSXOffice.

I initially became suspicious when having a conversation with a local friend involved in IT who had previous a business dealing with Brianna. When I mentioned that I donated to her Patreon, he suggested that I do a little more digging on the veracity of her claims. In doing so, I noticed several claims that seemed dubious. The one that concerns me most is of Natalie O’Brien because it is a purely financial matter and does not involve subjective ideas about politics or social justice. Simply enough, Brianna Wu has likely made over $30,000 over the course of her Patreon’s existence and there is no evidence that the person that she claims to be paying the money to (Or any other person filling such a role) exists.

In reaching out to fellow Bostonians in the gaming and coding community, I have not found a single person who knows Natalie O’Brien. Further, in reaching out to people who have supposedly worked at the Giant SpaceKat games with Natalie O’Brien, the only response I got was from someone who had never heard of Natalie O’Brien or a pregnant employee at GSK at all. When I contacted other members of Giant SpaceKat and Brianna Wu’s professional circle, I was met with ignored e-mails and immediate blocks on twitter.

This lack of an answer is even more damning than simply hearing that the employees had never heard of Natalie O’Brien. It’s one thing to not be aware of someone you work with, but it seems like an incredible overreaction to, instead of simply saying if you know the person or not, circle your wagons and refuse to speak on the subject.

The only person in Brianna’s social or professional circle who has been willing to speak publicly on the subject on Natalie O’Brien is former contract employee Emma Clarkson and she also doubts Natalie’s existence.

Some may be wondering why I’m posting this anonymously. My primary concern, is that as someone who is entangled in similar social and professional circles as Brianna, I’ve seen how quickly she can turn on and leverage her twitter followers against people, both in real life and on twitter particularly in response to criticism.

Secondly, as it becomes more and more obvious in the local community that Natalie O’Brien is fictional, I am, to an extent, a bit embarrassed for having fallen for this apparent ruse.

As for why I’m airing this grievance publicly, as previously stated, I have attempted to contact Giant SpaceKat employees in private and did not receive any response.

My request to Brianna is simple: I’d like to see proof that Natalie O’Brien, the (formerly) pregnant woman who is listed as an “administrator” for Giant SpaceKat, exists. Simply prove to us who have given you money month after month that that the funds went a legitimate cause. I think that is a fair request considering our financial support.