If you’ve been following the Brianna Wu Victimhood Tour, you know that she’s quite the piece of work. She never misses an opportunity to play up any harassment, no matter how trivial, or absurd. Obvious troll postings, that present no danger, are treated as grave indignities. All public figures are trolled like this, men included. But special snowflake Wu thinks she ought to be coddled after every crazy, bizarre, or disgusting tweet. People like her, would like to put blanket restrictions on speech, just so they can get over their superficial First World problems. Wu didn’t just start with GamerGate, though. Even weeks before it began, she was trying to $et herself up as a victim.

As you can see from this tweet, Wu’s been styling herself into an Anita-like figure for a while. It’s just that before GamerGate, no one gave a shit. When the media saw they could use her wild allegations in order to make gamers look bad, they leaped at the chance. But make no mistake, they know what a psycho Wu is. They’ll drop her like a bad habit at the earliest available opportunity. 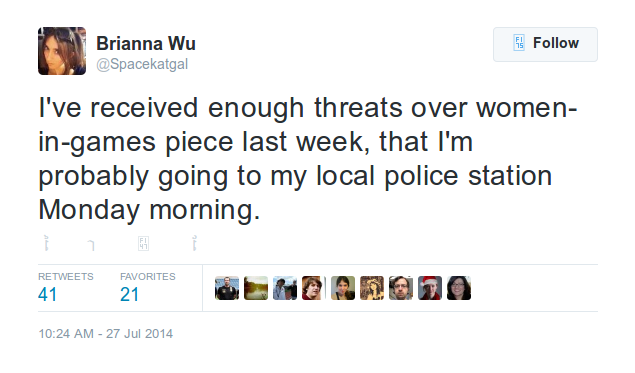 Why announce that you're going to the police station, unless you're just doing it to raise money or attention. #GamerGate

Neirdan actually found most of this information while we were doing research on Agness Kaku situation. We have a lot more on that coming to by midnight tonight (I’ve been wasting time on Twitter all day lol). But before we do, let’s look at what else Wu was up to around this time. Not only was she putting herself out there as a uber-victim yet again, she was also trying to get a man fired. You’ll never guess who was helping her. OK, maybe you will. It was Shitbag of the Decade Ben Kuchera.

Here’s Wu and Kuchera totally misrepresenting the man’s work, which is not surprising at all:

Hey, @gamesbeat. One of your writers is "bored" by this op-ed. Does he speak for you?

@benkuchera @venturebeat That's really the question? Does this person speak to your brand in a way you're comfortable with?

Remi notes that this is the second time they’ve went after careers:

Not only that, Wu favorited a comment from her buddy Randi Harper, where the Blocklist Blockhead makes fun of the homeless. As I said on Twitter, so much for being progressive. I guess all those millions Brianna grew up with makes it easy to chuckle at jokes about the homeless. But I think it’s actually just because she’s a massive loser. It has nothing to do with wealth.

Hey, Blocklist Blockhead, when did it become progressive to make fun of the homeless? #GamerGate pic.twitter.com/lrrl4wyd8g

Here's the archive, Randi. Care to comment on it, cause I'm throwing it into the Wu piece? @freebsdgirl #GamerGate http://t.co/DWLbSTcK88

The vile woman said nothing, of course.

Here's a pic of the SF Tenderloin homeless that Humanitarian of the Year @freebsdgirl was making fun of. #GamerGate pic.twitter.com/M10qpPopdO

Above, you can see some homeless people from the Tenderloin section of San Francisco. They weren’t able to ask their parents for $200,000 like Wu, or do whatever it is Randi Harper does for money. Maybe they made a few mistakes in life. Claiming the mantle of liberal, when you spit on the homeless, is inconsistent to say the least. But it doesn’t surprise me. The SJW ideology is poison, and has nothing to do with left or right. It’s true that it’s found a home in the far fringe left, but most leftists despise these charlatans, and want to see them defeated. That’s part of the reason GamerGate has so much support from across the political spectrum.

As you’ve seen here tonight, and probably already knew, these assholes had their outrage cash machine going long before GamerGate. People like Ben Kuchera helped them. They try to get people fired on Twitter by lying about their work, but call us censors when we email sponsors proof of journos spewing invective against their audience. They have have two different sets of rules, and the list that applies to them, allows them to mock the homeless, tweet racist comments, and kill careers. They’re not liberals, they’re money-hungry scammers, hell bent on shitting up our cherished hobby. Fuck them, and the horse they rode in on. Because It’s not gonna happen on our watch.

BONUS CRAZY: Here’s Brianna take on men who like lesbians.

I realize something about lesbianism sends straight men into overload. But, I think the sexualization of lesbianism is HUGELY damaging.

It erases the identity of women. It makes straight men the primary focus of a relationship that has nothing to do with them.

Straight men can have any kink they want – it's cool! But, I strongly think it should be kept more private – so lesbians can have own space.