Bully Boy Sam Biddle Still Has GamerGate on the Brain

Man, I have so much to write about today, including a column for the wrestling site. But the only way to get it done is to bang them out, so here we go. I’m sure you all remember our good friend Sam Biddle. He single-handedly sent GamerGate into the stratosphere, and reportedly cost Gawker Media millions of dollars in lost ad revenue. What did he say to cause all this?

Here’s a short refresher in case you forgot, with a news article for added context (h/t @TrustedTrevor): 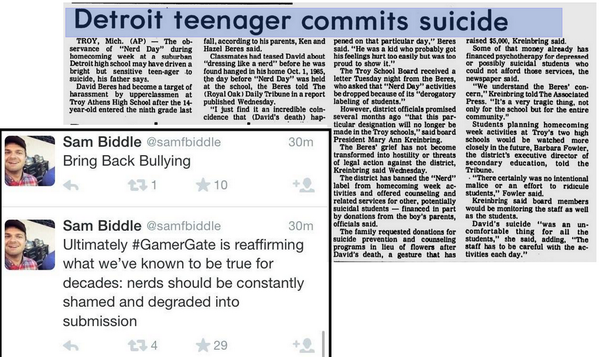 Well, he’s still got GamerGate on the brain. Who could blame him after we kicked his ass so badly. Not to shabby for a bunch of nerds!

As you can see, the column he wrote yesterday was actually about Reddit. He just can’t understand why they would allow offensive or downright racist subreddits to exist. This is a common problem with SJW mental midgets. They have no concept of free speech for all. Yes, Reddit is privately owned. Yes, they could ban any subreddit they wanted, or put in draconian rules on what you can post. But where does it end? Who decides what’s offensive? It’s much better to let everyone say whatever they want. I’ve always believed that and always will. When you start picking out who can be heard, you’re censoring. Fuck that. 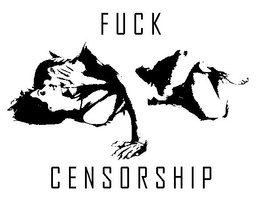 He even goes off on Ellen Pao:

It’s clear Reddit, its founder Alexis Ohanian, and its CEO Ellen Pao (yes, that Ellen Pao!) don’t give any sort of a shit about “remembering the human.” The site is stuck so far up its own techno-libertarian ass, shouting about the importance of anonymity and laissez-faire community governance into its bowels, that it can’t see the very plain truth: it has become a top destination for bigots. With the same zeal that they brought to the fight to block SOPA, Redditors fight anti-racism or anti-sexism efforts as the encroachment of a fascist surveillance state. This stupidity comes straight from the stupid top.

He really seems to have a lot of hate for Reddit. I wonder if all this has something to do with KotakuInAction?

Upon seeing the values announcement, Reddit’s GamerGate HQ (EDITOR’s NOTE: KiA) reacted sharply: “Reddit is going the way of SJW,” lamented one ethics enthusiast. “Ellen Pao is in charge remember, and it’s based in San Francisco. When you elect a fucking lunatic, you get the expected outcome everyone here said would come to fruition.”

We are not involved in any way with the subreddits mentioned in his post. But the slimy fuck still had to throw us in for no reason whatsoever. I’ve discussed this propaganda tactic before, and it’s just as disgusting now as it was then. Of course they have no shame over there at Gawker, so no one is exactly shocked that they would take a page out of Zoe Quinn’s playbook. That’s just how they do business.

I hope Sam keep sending us little love letters like this one, because we’re gonna stay on his ass. One slip up, and we’re there to light you up once again, Biddle. I haven’t forgotten what you said, or how dismissive your editor acted about it. So keep it up. I know you’re gonna slip.