Well, GamerGate hates to be the one to say we told you so, but, we told you so. And actually, I don’t hate that shit at all. I am starting to have an unhealthy dislike for Gawker Media, though. Although last night they may have bitten off a little bit more than they can chew. One of their hacks ran a story on Timothy Geithner’s brother, David. Tim used to be the president of the New York Federal Reserve before serving as Treasury Secretary under President Obama. David is the chief financial officer for Condé Nast. Needless to say, the family is connected as fuck.

Gawker published an amazingly vindictive report on David, seeming to show that he tried to meet up with a gay porn star. Some are questioning this retelling of events due to the fact that the man making the accusations is a notorious flake. There are some holes there, and if they can be sued, they will be. You think Hulk Hogan is trouble? They definitely don’t want the Geithner family to come knocking. I can guarantee you this has reached the highest levels of the administration already today. Many people are asking what excuse they even have to run this? David wasn’t a politician advocating against gay rights, or even a politician at all. I’d never even heard of him. He’s just some executive. Had it been Tim, OK, that would have made a little more sense.

We’ve reported on almost every Gawker misdeed over the last year or so, and this one is no different. But one thing that is different, is that they’re catching heat from all corners. The mainstream media and its chattering class are coming down hard on the gossip site:

Even some of its own writers have turned against this. You might be looking for a job pretty soon, knowing Denton: 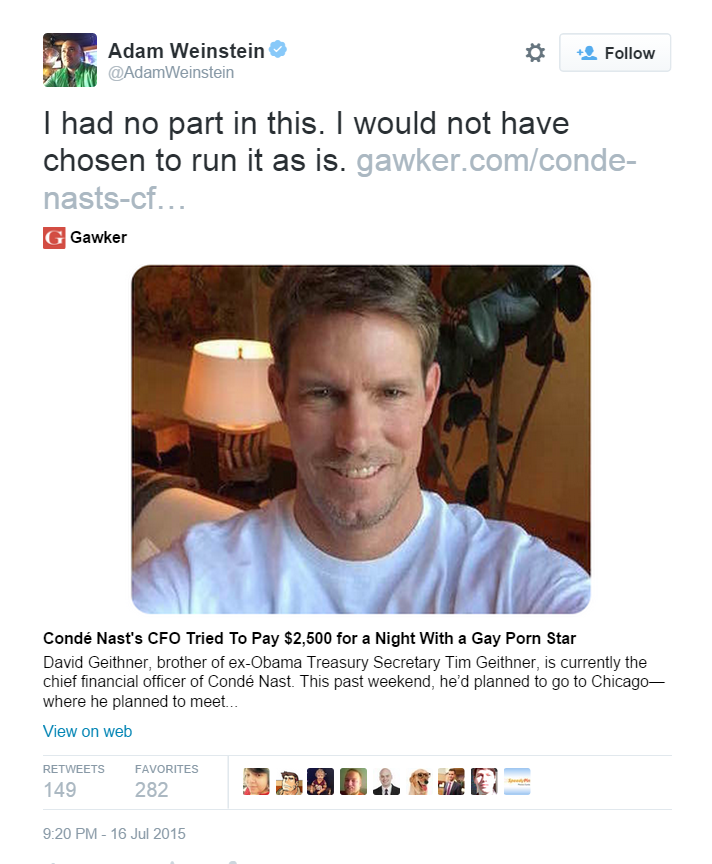 Of course Milo is on the case, and his thoughts will be out shortly I’ve been told:

How many cruel and unnecessary stories must Gawker publish before people realize this isn't a fun site to browse over their cereal?

(Here’s that USA Today report, as well as the advertiser info.)

if all those raging at #gawker actually stopped reading it, then the outrage would mean something.

Here are some of just a few stories written to slam them:

How Gawker Completed Disgusted Everyone on the Internet

Gawker drags media coverage to a new low, outing an executive just because they can

David Geither himself weighed in:

“I don’t know who this individual is. This is a shakedown. I have never had a text exchange with this individual. He clearly has an ulterior motive that has nothing to do with me.”

If that is the case, then I hope you sue the shit out of Denton and finally end his reign of terror once and for all. Hulk Hogan and you together might be able to break this bastard. They’re really starting to piss regular people off more than ever before. I guess that’s what happens when you position yourself as this progressive outlet, but repeatedly go around outing gay people, accusing stars of being rapists with zero evidence, and publishing sex tapes. The list goes on and on: 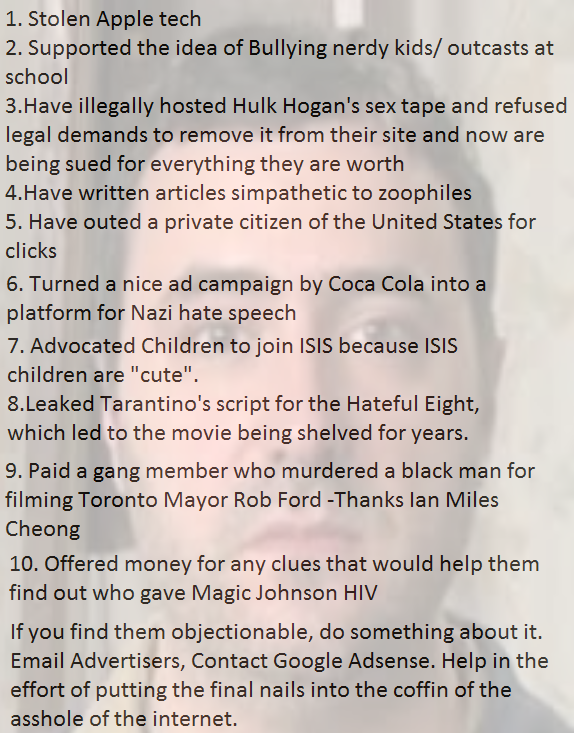 How are these people still around? At least the full-scale mobilization is finally beginning. Let’s keep the pressure up. Don’t let them slink back into their hole for another couple of months until they completely outrage us again. Send those emails, tell your friends, spread this story far and wide. The time has come to finish the job and sink Gawker Media for good.

UPDATE: Milo has weighed in with a column of his own…

Gawker knew it was a shakedown from the very beginning. The “escort” specifically told the blogging network that Geithner promised to take one of the escort’s conspiracy theories to President Obama if he got Gawker to kill the story.

Let that sink in for a second: the conspiracy theorist’s plan was to use Gawker as leverage over Geithner. And Gawker acted as a willing participant in gay extortion. A man’s reputation was held hostage at blogpoint and an editor went ahead and pulled the trigger, perhaps even knowing the story was shaky.

Evidently, Gawker is the kind of place where they hold up pictures of Sabrina Erdely and say: “Now this is how you do it!”

Many of my Twitter followers use “archive links” to deny advertising revenue to sites they dislike. It’s a way of producing a photocopy, if you like, of web content that does not generate new clicks, and therefore ad revenue, when readers visit.

I have in the past resisted using services like that out of journalistic solidarity. But after Gawker’s appalling story about David Geithner, there is no more solidarity to be had with them. No reputable journalist can recognise that company as a responsible reporting outlet.

From now on, it’s archive.today all the way.

Tommy Craggs is the executive editor of Gawker, who used to run Deadspin (he turned it into complete shit, btw).

Adam Weinstein (from above) also chimes in to let us know he was secretly fired from Gawker last month, and simply refused to stand by their bullshit report. He’s still a piece of shit, so no sympethey there. But still, at least he’s calling them out as well.

We’re removing our story about the CFO of Condé Nast. http://t.co/UOV9q8FUlI

The point of this story was not in my view sufficient to offset the embarrassment to the subject and his family. Accordingly, I have had the post taken down. It is the first time we have removed a significant news story for any reason other than factual error or legal settlement. 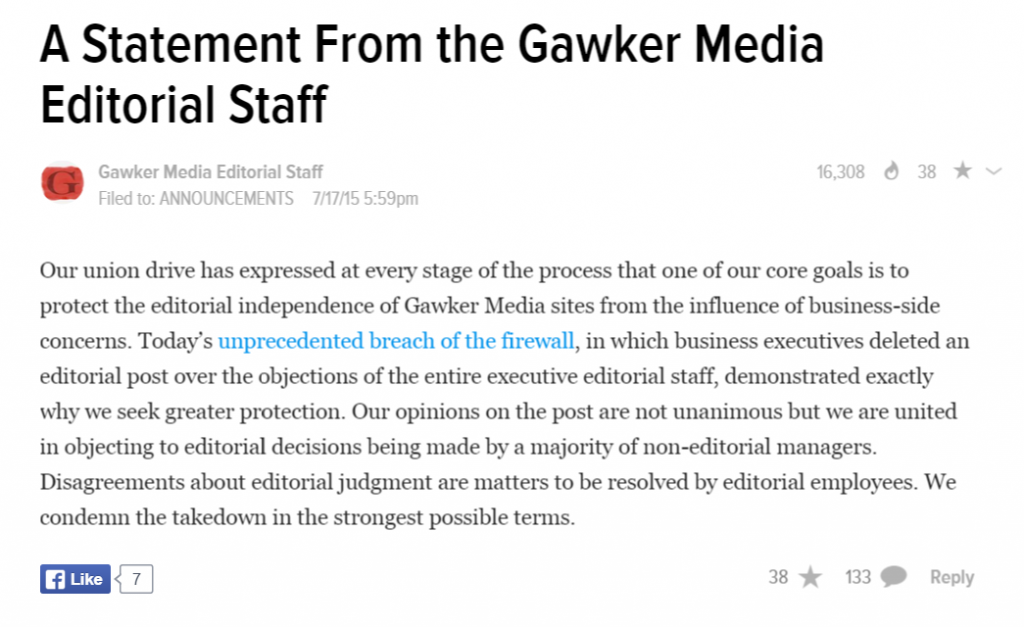