Good morning people! I had a really good time with the stream last night. If you know my streaming history, that’s not always the case. To be fair, it’s almost always fun “in the moment.” When I wake up and listen to the replay that’s not always the case haha. But anyway, thanks to everyone who tuned in. The replay is up for those who missed it or want to watch again. I’ll be doing another stream on Friday night @ 8PM EST, so check that out. We have a lot to cover this morning, so let’s get to it.

Oliver Campbell has withdrawn from Airplay after the dust-up from yesterday. I hate to hear that, as he was one of the biggest engines involved with this operation. But, these things happen. Before I get into replacement scenarios, let me excerpt some of Oliver’s blog post explaining this move:

I will not be attending Airplay. The committee spent weeks debating the merits of the chosen representatives. I know there was a great deal of support from the community for my nomination. It will always be my honor to have been chosen. I’ve never claimed to be the voice of Gamergate; I’ve just always tried to make sure you all are heard.

I’m no longer sure that AirPlay is in GamerGate’s best interest, and I’m no longer confident that the issues you brought to the table will be addressed in the way you deserve…

When panelists are not being consulted about the very panel they’re going to be involved in or asked about how they’d like to see things handled, that’s not good for GamerGate or AirPlay.

When the person putting together AirPlay intentionally makes an antagonizing update focused around myself removing nuance, context, and omitting the bulk of their own actions during a private conversation in order to spin a story… that’s not good for GamerGate or AirPlay…

And again, it was an honor to have been selected, and I’m sorry to have disappointed you. I’m disappointed as well.

So, that’s that. Oliver is out. I wish him the best, and hope he sticks around GamerGate. I know this has to be a bitter disappointment for him, so try not to be too hard on the guy. Replacements are already coming into the picture, though. Sargon of Akkad’s name has been floated. A friend of mine, Paolo Munoz, has also been mentioned. No decisions have been made as of yet, but these are the current front-runners, I would say.

http://t.co/WMlqOEIo0P #GamerGate [SPJ Airplay] Sargon of Akkad is willing to replace Oliver if we want him to, I'm all support

So, I guess we’ll figure this shit out. I’m pretty pissed at Koretzky. I don’t think his conversation with Campbell was meant to be on the record, and so I think this was a pretty shady ass move right up there with some of the more flagrant violations we’ve covered here on this site. But, it is what it is. We move on from here and make the best out of it, like Cathy Young said this morning: 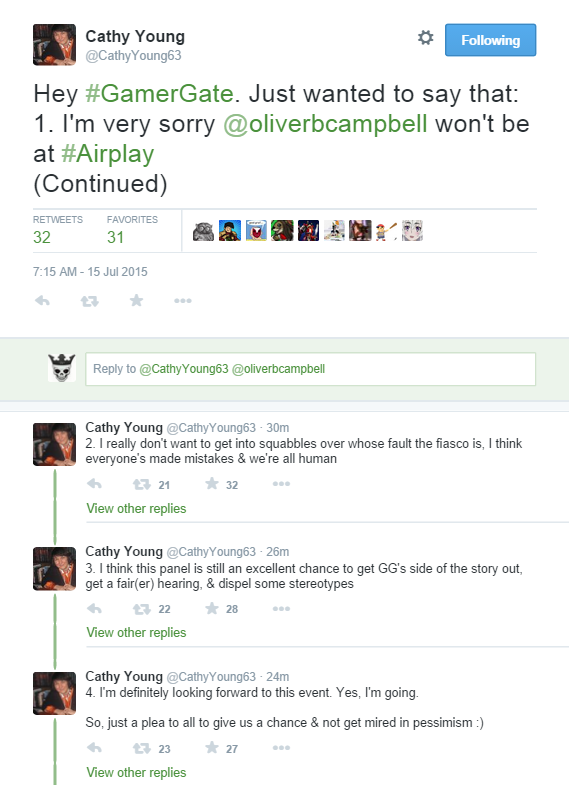 Lemme know what you guys think down below. More Reddit news is on the way, so check back for that piece within an hour.