What’s going on everybody, it’s Johnny Fox. You may remember me from old #GamerGate open house streams and the countless investigations I was apart of in GG. The big dig I’ve been doing as of late involves app known as “Candid.” It’s billed as “The anonymous posting app all about free speech,” but that’s a crock of shit when you have a bot analyzing every post to see if it’s “appropriate.” That’s where the first problem comes in. Candid’s bot, CEO Bindu Reddy, and the people who were sponsored by Candid, all ignore the fact that it has a lot of pedophile groups. You would think this might be an issue, but I guess it’s all good as long as the check clears. MundaneMatt, Shoe0nHead, and Armoured Skeptic all got paid thousands to shill this pile of garbage and then look the other way when the criminality occurred.

So much for ethics.

I came into this when I was working on a story about Periscope running cam shows late at night coming from Russia & Ukraine that involved crimes against children. Due to the fact Russia & Ukraine have almost no laws against the trafficking or distribution of child pornography, they are allowed to run these streams in their own countries without running afoul of the law. The problem is, it’s not locked to their countries & can be seen worldwide without any restrictions. That can cause unprecedented issues for people who may be scanning through Periscope and happen upon one of these disgusting shows.

For more info on the periscope investigation click here.

Upon completing that video I received a flood of messages from people claiming Candid (BeCandid.com) was actually much worse. The claim said Candid was allowing people to trade pictures & videos freely within the app itself. with Bindu & the shills simply turning a blind eye to the issue. I didn’t want to believe such a nasty tale…at first.

However, there were screenshots sent to me confirming that many people had reported the posts and individual groups to the “mods,” who then proceeded to completely ignore said reports…until I ran the first video exposing it. The group was called “Pedos Unite,” where people would host openly request pictures and even dump entire folders of CP to each other out in the open.

Bindu Reddy got a personal message from me letting her know it was going on. Then it all got cleaned up.  Nah, just kidding. It got even worse. Over the next few days, I was sent (at the time of writing this) 42 images that had text posts of predators trying to seek images from children. The reports of this sort of behavior basically never stop flowing in my DM’s at this point. To save space, here’s an archive link. By the way, there’s nothing illegal that will get you in trouble for viewing it.

Now, I have been working with many people behind the scenes on this issue while trying to stop CP from being trafficked on Candid. I know it’s run by SJWs, but their ideology doesn’t put them above the law. I have personally contacted the FBI/IC3.

There are a lot of people coming to me saying:

Well Twitter does it too! It’s not Twitter’s fault is it?!

It’s not Twitter’s fault unless they refuse to take down the images and report the account to authorities. Candid refused to take down the groups and images until they were hard pressed by me and the diggers I have worked with on this investigation. As seen below, the screenshot says that this investigation against the CP groups have been going on for over a month of mass reporting, to no avail. 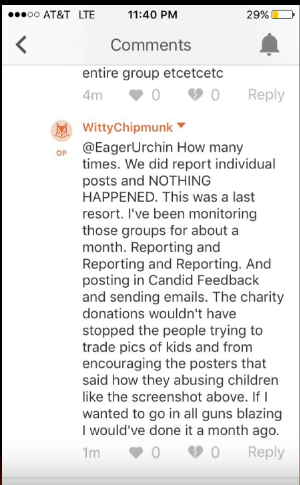 According to a source Candid instead of banning the “Pedos Unite” group outright they decided to make their group “shadowbanned” (more accurately defined as “unlisted”) meaning only the members in the group could see it, not the general public. Good job #BinduNuffin. 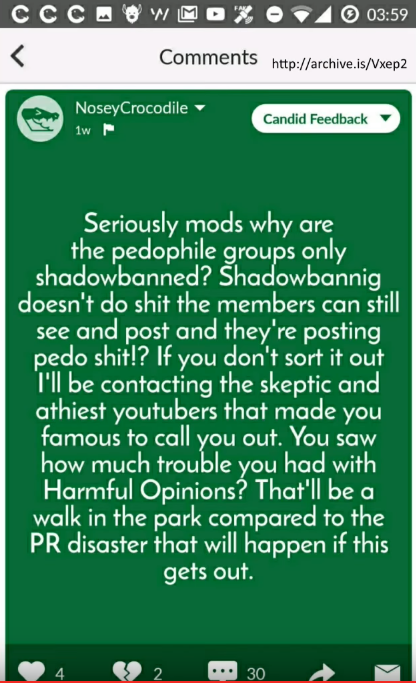 I’d like to also highlight some damage control from an e-celeb I’m sure all of Ralph’s audience is quite well acquainted with: Matt “MundaneMatt” Jarbo. He decided to conflate Dan Olson’s accusations against 8chan against my own against Candid.

I’ve read Olsen’s Medium post. The issue here is 8chan deleted those threads. They don’t exist anymore and we don’t know if the FBI raided the original posters anyway… so that’s not an argument or excuse.

“Such as soliciting photos of underage girls in thongs while salivating over a deleted photo of a young child, requesting that it be re-uploaded.” ~Dan Olsen

The idea that people with such a large audience would completely punt a story like this because they wanted to protect their buddies is disgusting to me. We called for ethics reform in #GamerGate but you see what the “Leaders/Champions” have boiled it down to.

“If it does not profit me 100% and doesn’t push my narrative i’m not touching it. Hell with kids getting exploited, we need to hear about black lives matter explosion number 300 where they did the same thing as last week for BLM Is Nuts Part 256” ~Every E-Celeb Ever.

For example I posted my original video breaking the story about Candid’s rampant CP problem on January 11, 2017. The video was sent by me and multiple other people to the Candid shills along with other well known outlets that cover newsworthy stories on YouTube. Not a single retweet, like, or response… except one.

On January 13, 2017 a video by well known “anti-SJW” channel Shoe0nHead released a video on her alternate channel called “Shoe0ffHead” (next thing you know it’ll be “ShoeUpAss”) released a video of pretty much Candid dindu nuffin filler.

They answered questions from the Candid app which many of the posts involved talking about CP as a joke. Call me tinfoil, but I find it convenient that after I release a breaking story about the Candid App shilling CP, two days later damage control comes in the form of “look how kooky Candid posters are!”. I don’t buy for a second that my exposing Candid video lead to yet ANOTHER Candid dindu video like skeptic did a while back.

Also, instead of helping exploited children she decided to waste time making a video about well known Anti-SJW channel, The Satiratician, sending all her goons after him instead of doing some real work like saving kids. What a gem she is. Btw this happened too http://archive.is/QYEAF

Well then… I see bitching about defending thy honor of a fictional character is more important than helping children who might be in danger. Satire or not, your white knight shield is showing again.

Quick note, Candid shills were offered a sum of $10,000 by Bindu Reddy to white knight for the app and say “it dindu nuffin.” This was presented to me in the case of MundaneMatt who was apparently paid by Bindu which may explain why he has been so defensive about Candid.

HEY MATT TURN OFF THAT PESKY ADBLOCK, AND TELL US YOU’RE SPONSORED IN THE VIDEO NEXT TIME! I know that you claim “it’s in the description, I fixed it after,” but you should have let people know up front anyway…but I digress.

The other argument I keep hearing defending Candid’s corrupt practices is the famous “Supporting an App doesn’t mean they support CP Trading”. To that I say, if you visited a nightclub that was full of children being exploited in the back, you saw that, and turned a blind eye because “muh club” then you are in fact enabling it. Semantics aside, you are still wrong, period.

As an added bonus if you want to see some mass level damage control from MundaneMatt and @ChrisRGun trying to protect “muh pinions” and punt our investigation ONLY after the #SkepticIsOverParty went so big and rattled so many chains. They speak for themselves. Proving my entire point about that group protecting each other and punting all opposition.

I started #SkepticIsOverParty (someone else named the tag, I started the fire), because of their arrogance and the fact they’d rather put retarded internet politics over saving kids lives. My point got across to the real people who give a shit about others beyond themselves. The shills & white knights can do damage control all they want, my point got across with those who mattered in the end anyway. I thank those people for being honest and I will buy you a beer one day if we ever cross paths.

Last thing. I keep hearing the argument “They signed a contract that means they can’t disparage the app or they could get sued.” Let me put that to bed now. Retweeting a video on Twitter that exposes CP on the app, or mentioning it to friends in private doesn’t breach contract. Even if it did, in some parallel universe, then they have federal law on their side under the whistleblower’s protection act:

For the sake of argument, let’s say that it’s not applicable in this case due to contract terms that are very vague and leaves holes open. Still, you also have a legal obligation to report crimes against children if you see it. It probably won’t land you in jail (we don’t live in minority report future yet) if you don’t, but the law says so. Source: http://archive.is/QJIMT

Big thanks to Ralph for letting me run this story here, I appreciate the fact that he gave enough of a damn to help me in this fight unlike all the e-celebs.

For more information about the situation check out my Candid Investigation playlist on YouTube where I have been covering this from the beginning in much more detail than stated here. It’s been a long hard road, but I know in the end we have to fight the good fight to protect our kids from this.