Today has certainly been eventful. Besides the craziness I have going on here, there is also something on the Brianna Wu is a Lying Scumbag front. In case you missed it, the other day she wrote a post for The (Radical) Mary Sue. In it, she chastised an Ohio prosecutor for not following up on a death threat that supposedly came to her from a number in that area. The article has 787 comments on it at last look. The editors promoted it like this prosecutor was the scum of the earth. Brianna called him out:

Terrifyingly, nothing has been done. After Elliot Rodger, we know these threats have to be taken seriously. Does someone have to die before law enforcement does their job?

The man in the tape above has called my house repeatedly. When my husband picked up the phone he whispered in dark tones to him about his plans to murder me. Just as terrifying as the threat itself is the feeling of helplessness I have any time I contact law enforcement.

Ohio prosecuting attorney Ron O’Brien can be the man to step up and take a stand against GamerGate on behalf of women everywhere. Ron O’Brien, this case could not be more clear. The evidence on tape speaks for itself, and you have it in your power to subpoena his name from phone records.

There’s only one problem with her narrative: she never filed a police report in this district. Maybe I should let the prosecutor explain? 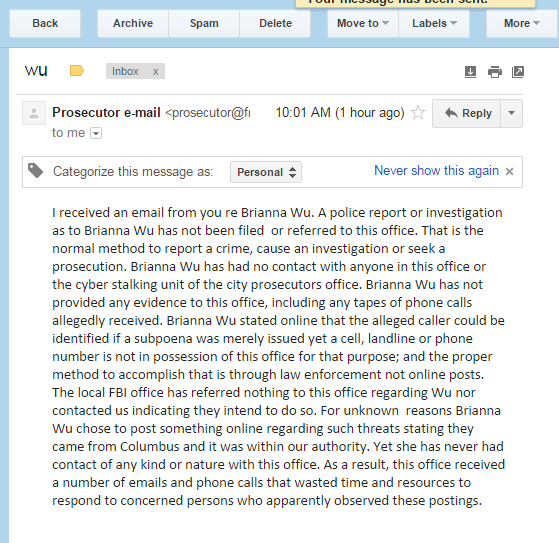 Mr. O’Brien has a sense of humor, it seems. “[T]he proper method” for reporting crimes is through filing police reports and filing evidence, not making LOOK AT ME posts on SJW websites. You should read the whole thing. He really takes Wu to the woodshed. She wasted their time and resources as well, according to him. I wish he would find a charge for her ass. I doubt it, but a man can hope.

After Brianna got caught red handed, she rushed to Twitter to try and cover her tracks and do some damage control. It was high comedy.

Also wanted to say, it’s looks like it was miscommunication that caused this report to fall through the cracks with the Columbia DA.

Here’s the spin she’s trying to put out:

Here’s how the mix-up happened: Wu gets so many threats, she said, that she has to have employees handle the police reports, and apparently the one in this case was misdirected, right before a change in the person who did the job.

“There’s a psychological cost to constantly reading and hearing and seeing information from people threatening to kill you,” she said. “I try to be hands-off with some of this, for my mental safety.”

Wu goes on to say that she just wants to get back to making games now. If only someone hadn’t started a bogus media frenzy, huh? Brianna, you’re once again full of shit, but it’s so satisfying to see you get busted like this. Please, keep eroding what little credibility you have left. Even the SJW mob is starting to get fed up with your lies. It won’t be long until you have no real support.