More to come, but here’s the latest: just as I predicted in multiple columns, Ellen Pao has been relieved of duty. That’s right, she’s fucking out of a job and is going to be replaced by Reddit’s founder. More from Recode:

Ellen Pao is stepping down as Reddit CEO, a move that comes amid mounting pressure after a series of management mishaps that has angered its very vocal online community. Steve Huffman, Reddit co-founder and its original CEO, is taking over immediately.

In an interview this afternoon, Pao said the departure was a “mutual decision” with the board, due in part to different views on growth potential. “They had a more aggressive view than I did,” she said.

When I asked her directly if she was fired, Pao laughed and said, “Thanks for getting right to the point,” but again underscored she resigned. Reddit board member and Y Combinator head Sam Altman answered more definitively about whether she was ousted: “No.”

This story will be continuously updated throughout the night, starting now. But I wanted to get it up as quickly as possible….

First off, I said I predicted that this might happen. I swear, I’m not making that up. Here’s your standard visual evidence:

They could just fire Ellen Pao and blame all this shit on her. She's still "interim" CEO for a reason.

As well as my celebration from today lol:

I’m about to go look for some more reaction from around the media, and see if I can get some of the story from behind the scenes. Let’s start with the official announcement that was posted on Reddit, though: 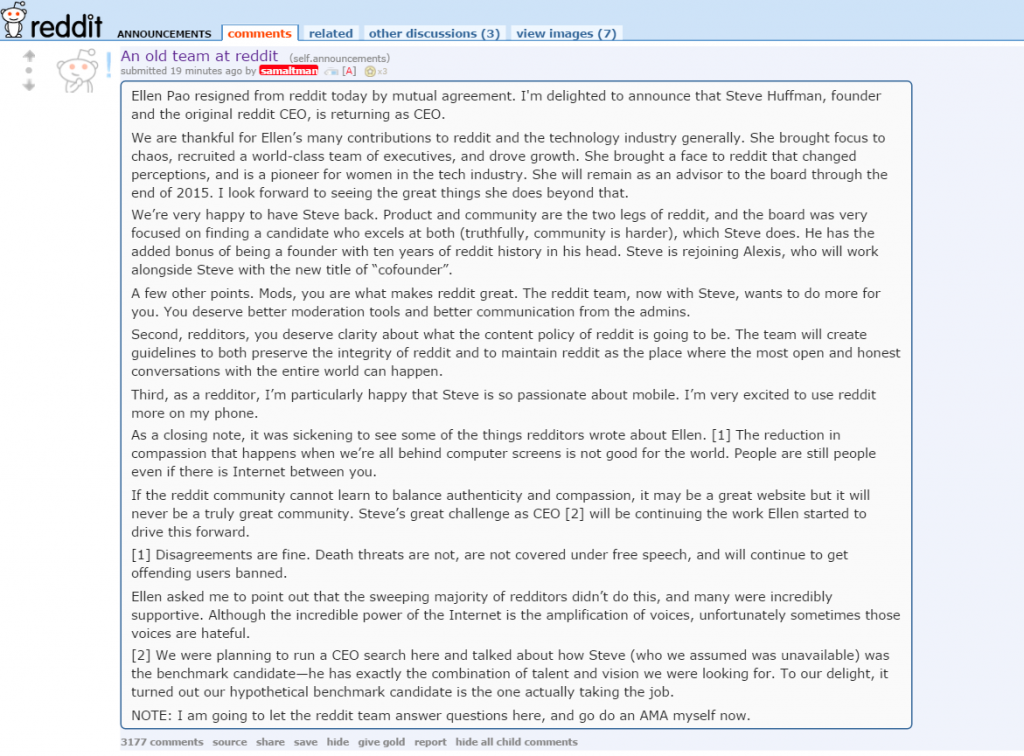 From The New York Times:

Ellen Pao, the interim chief executive of Reddit, resigned from the online message board on Friday after a week of ceaseless criticism from scores of angry users over the handling of an employee departure…

Her exit, which the company described as a mutual agreement between her and Reddit’s board, follows a week of unrest in the Reddit community, which is made up of more than 160 million regular users who use the site to talk about anything from current events to viral cat photos.

Ms. Pao characterized her departure as a result of a disagreement with Reddit’s board on the future of the company.

“It became clear that the board and I had a different view on the ability of Reddit to grow this year,” Ms. Pao said in an interview. “Because of that, it made sense to bring someone in that shared the same view.”

And already seeing posts about Pao being "forced out" by misogyny.

That didn't take long at all.

In a statement made on Reddit, board member Sam Altman addressed this streak of obnoxious behavior, calling Pao’s treatment “sickening.”

“As a closing note, it was sickening to see some of the things Redditors wrote about Ellen,” Altman said. “The reduction in compassion that happens when we’re all behind computer screens is not good for the world. People are still people even if there is internet between you.”…

In a goodbye letter posted to Reddit, Pao echoed Altman’s comments, writing that in her eight months as Reddit’s CEO she has seen the good, bad, and ugly. “I just want to remind everyone that I am just another human,” Pao wrote. “I have a family, and I have feelings. Everyone attacked on Reddit is just another person like you or me.”

“It undercuts the authenticity of Reddit and shakes our faith in humanity,” Pao wrote.

Ironically, critics who launched sexist attacks on Pao were upset that she fired a woman named Victoria Taylor, citing Pao’s gender discrimination lawsuit against venture capital firm Kleiner Perkins as a source of hypocrisy. To rectify the grievance, Pao’s critics may have successfully driven another woman out of her job.

Gawker is of course throwing their slime around as well…

After spending the last few months turning Reddit into a virtual guillotine for its widely despised CEO Ellen Pao, it looks like redditors are finally getting their wish. Ellen Pao is officially stepping down as CEO, and Steve Huffman, co-founder and original CEO, is taking her place.

Speaking to Recode, Pao claimed that the decision to leave her role as interim CEO was a “’mutual decision with the board, due in part to different views on growth potential. ‘They had a more aggressive view than I did,’ she said.”

The real question, though, is whether the reddit community’s vast and unwavering hatred for Pao played a role in this so-called “mutual decision.” Obviously, having a huge number of users regularly comparing the site’s CEO to a variety of genocidal dictators isn’t something that would be tolerated for long. And nearly every unpopular decision the site’s made since Pao came into power has blamed on her entirely, a phenomenon that seems to have popped up as a direct response to the her lawsuit against Kleiner Perkins for gender discrimination.

More from Twitter, with Sarah Butts (aka The Pedo) weighing in: 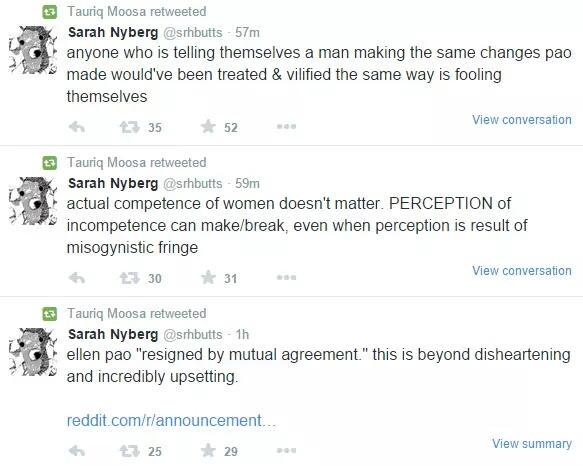