The media has had a narrative they’ve wanted to tell about us since the beginning. They claim that we are a hate group who wants to harass women out of gaming. Our opponents are the only ones who face threats, swatting, and the like, according to this narrative. Last night, we again saw how bankrupt this tall tale is. We face the exact same things they do, but the media simply ignores our plight. Other than the GamerGate press, I haven’t seen much of anything about the bomb threats last night, although to their credit, Kotaku did just write a post on it while I was putting this together (though they couldn’t resist taking several shots at us). I didn’t see them questioning why a shitbag like Arthur Chu would call a place and try to have them deny service to paying gamers, though.

Where’s the outrage? Why isn’t there a chorus of “stop harassment now” when we get targeted? I guess it’s because we don’t have the “right” views.

Look at this guy…he’s actually whining today! Over what? Because he lost and everyone still had a great time? 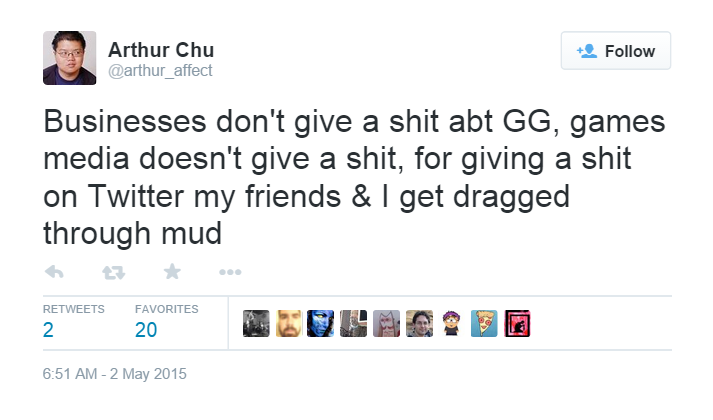 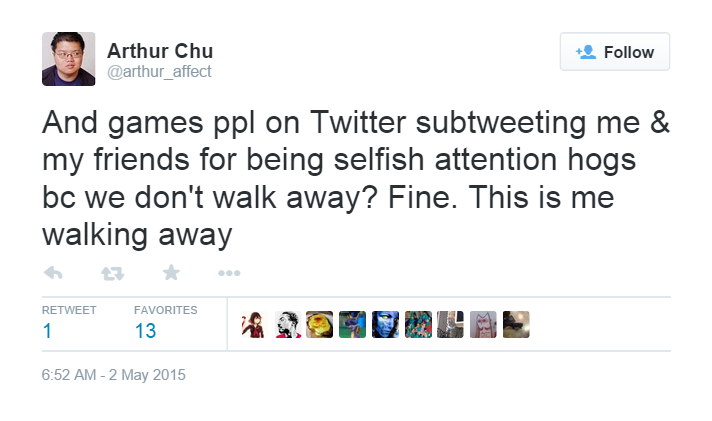 The email he sent to Local 16, the venue that hosted us last night is laughable, yes. But it’s also a great example of how low these people will go:

But thankfully, the owner of that establishment thinks being cowed by fascists is a bad thing, not something to celebrate:

Owner of bar called me after getting scary warnings not to host #GGinDC Spoke with accent:"Would never keep any group out. This is America."

Well, considering he already quit once back in the fall, I’m pretty sure Chu is once again just playing for attention. But we’ll see. The rest of the SJW mob on Twitter hasn’t handled themselves any better, by the way:

No, I think you have us confused with someone else, perhaps one of your friends like Anita or Zoe? What’s so hard about just condemning this type of aggression? Of course you have to be a decent person to do something like that, so I guess not.

Here’s some more video and reaction from #GGinDC:

As I said, Kotaku did write something about all this, but they still had to take shots. Talk about no class…

This was the first official U.S. get-together for GamerGate, a movement that started last year and whose members regularly campaign against liberal feminism as well as what they say are ethical problems in video game journalism. Participants in GamerGate frequently use social media to annoy and harass various targets (including many of us here at Kotaku). Outspoken critics like Anita Sarkeesian have also blamed the movement for a great deal of harassment—doxxing and death threats—targeted at various people.

I guess just saying this was a terrible act was too much to handle. Kotkau clowns just had to throw in some attacks. At least they did cover it, which is more than I can say for the rest of the media. I’m about to go get ready to watch the Mayweather/Pacquiao fight at my local Hooters. Anything I missed, please add it down in the comments. The event last night was amazing, and nothing can mar that. We’ll keep our eyes on Chu, although I’m quite certain he’s lying. He gets mad and quits all the time when things don’t go his way. That’s the difference between us and them.