Early this morning, a AAA dev supposedly came out on Twitter. I’ve heard about this coming for awhile, but I didn’t know who it was. Well, it finally happened early this morning. He goes by the name of The_GoldBat on Twitter, and he outed himself early this AM. He didn’t give too many details, but I have been informed of his company, job etc. I can’t independently confirm that it’s true, so it’s still a claim, at this point. This person says that help in on the way, in the form of more AAA support.

He also said that one of his female employees has been threatened as as result of her supporting GamerGate. Here’s the screens: 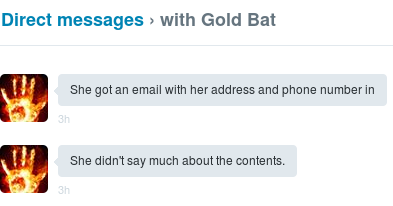 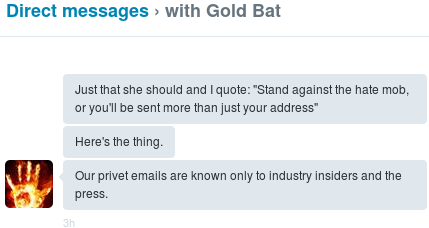 I won’t comment too much, because I don’t want to get scooped on this story. I’ll only say that this fit into the patterns of our opponents. They frequently try to mess with people’s employment situation through nefarious means. Calling a hack writer like Leigh Alexander out publicly, isn’t nefarious. Sending threatening emails on the low, is. Stay classy, anti-GamerGate.

UPDATE: Somehow, the account has now been suspended from Twitter. Hmmmmm, where have I seen this before?

HE WILL BE BACK I ASSURE YOU