I just woke up. I guess I needed to catch up on sleep, cause my body said fuck it a couple times the last 2 days, and I just passed out. I’m not sure what’s up, but at least I will be well-rested for the LIVE show tonight (10PM EST). Anyway, I’m up now, and here to bring you the latest GamerGate news and opinion. There are several big things brewing, but the biggest would have to be the potential Hewlett Packard desertion of Polygon. We can’t confirm it 100% at this point. I just want to be clear. But, if true, it represents a beautiful early Christmas present for our seemingly indestructible consumer revolt.

Here’s the email below: 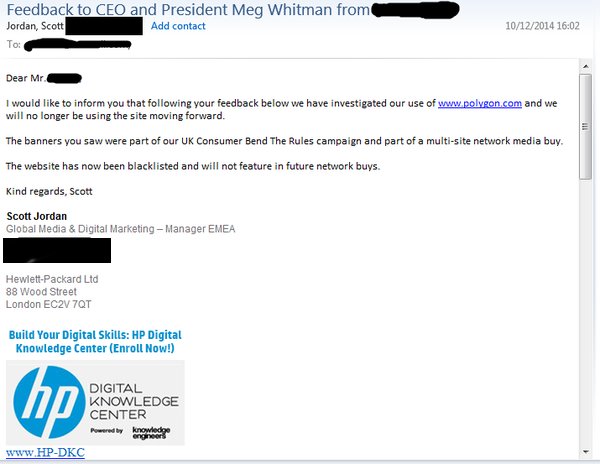 It certainly looks real, and we’ve had a guy who claims he’s a HP employee say it looks legit. Obviously, that’s not enough to confirm the claim, so I’ll keep this story updated as we hopefully learn more. The problem with these kinds of stories, is that sometimes the company doesn’t really want to say anything else, but hopefully Hewlett Packard doesn’t act some of the other companies. Also, we might get similar emails from other people. If so, I post them here when I receive them. Polygon is shit, so a company like HP dumping them would be a huge win for. Still, don’t get too carried away yet.

I’ll just finish up this quick news hit by saying if true, this would further validate the email strategy that some thought had been wearing thin over the last few weeks. Even I had been somewhat discouraged. But, we have to keep in mind that companies don’t react based on our clocks. They have their own internal decision making processes, and they have nothing to do with GamerGate. All we can do, is keep them informed with out emails, continue our personal outreach, and enhance our public activism.

Check back later, and I hope to have more on this story.

UPDATE: I’ve talked to the gentlemen who sent publicized this email, and he’s waiting on confirmation from William Usher (who’s calling this PR man). I’ve also replaced the original email, with one that blocks out Scott’s phone number.