I saw a tweet a couple hours ago that really set me off. I feel like it encapsulates most of what we’re fighting about, at least with regards to the gaming media. Cliff Bleszinski, of Gears of War fame, came out and said that if a “sensationalist news outlet” got a hold of Hatred, then games would be sent back to the “1996 Jack Thompson era”. That’s pretty rich, especially coming from Bleszinski. His brother, Tyler, founded Vox Media. Vox includes Polygon & The Verge, among others. Both those outlets have continually spit in the face of the traditional core gamer. They’ve been at the forefront of the current push to censor creators, either explicitly, or through media pressure. 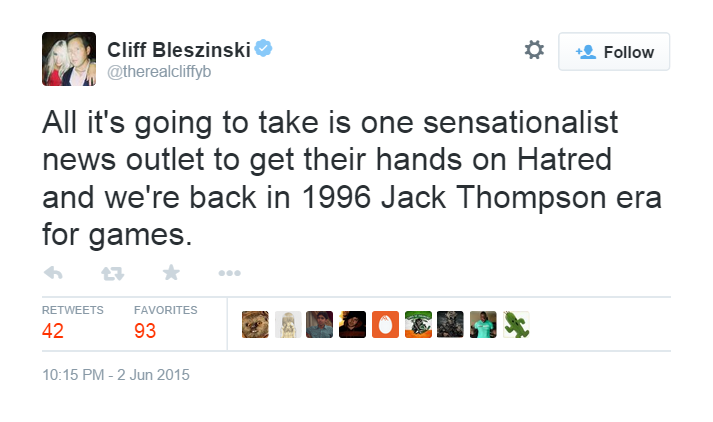 When you think about it like that, it begins to make sense. Bleszinski himself is advocating for censorship with his statement. Who gives a shit what the media thinks? We’ve beaten them before, when gaming was less respected than it is now. Of course back then, we had a decent gaming press, one who actually defended the gamer. What a difference all those years have made.

.@therealcliffyb Why should gamers care? We beat them before, we will prevail again. Of course, we had a decent gaming media back then…

Back then, we didn’t see three articles a week about how problematic certain themes were. Writers didn’t discuss whether or not a female or a male was presented to you first in the character customization screen. Patrick Klepek, from Kotaku, actually wrote an article about that a couple days ago. It wasn’t enough that a woman was in the game. Now it was time to bitch about whether the male was offered first. It’s sheer lunacy. Why is this even worth space on a site with Kotaku’s reach? Because a good number of them are SJW ideologues, that’s why.

If we return to the Jack Thompson era, it will be because of people like Bleszinski and sites like The Verge, Polygon, and Kotaku. Creators should be able to make whatever they want, as long as it’s not illegal (child porn, etc). All gamers, gaming media members, developers…everyone who loves games…should fight to uphold that line. Fuck what the outsiders say. We’ve never needed them anyway, and by now, they’re far out-numbered by rational people. I don’t see as many folks buying into the bullshit arguments that crooked politicians and SJW whackjobs like to spout about video games. I was around in the Thompson era, and there were a lot more numbskulls, trust me. Idiots like CliffyB need to  stop being pussies, and actually remember how we beat the censors back then.

(HINT: It wasn’t by becoming them.)