After a long night putting together that Mike Sacco piece, I’m back at my desk. Actually, I’ve been here since 2pm EST, it’s just that it sometimes takes me several hours before I’m ready to start writing. I like to feel the pulse of the community and see what’s on their mind. I also have to reach out to sources and the like, while catching up on all the news, digesting it for myself, etc. Today, this lull period took even longer than usual, because so much shit was going on. I got mentioned in Jezebel, for one. But there’s so much more to unpack here.  [Intro written last night lol]

As I said, Jezebel name-dropped me in a column yesterday. Actually, it wasn’t too bad. They actually examined the interview Kingofpol and I conducted, and gave us props for it. Here’s an except from the article, where they linked me without an archive link. I’ll return the favor (but throw in an archive for those who still say fuck that lol).

“This weekend, two popular Gamergate podcasters who go by the names The Ralph Retort and Kingofpol posted a video interview with Connors. Clad in sunglasses, a camouflage jacket, and a yellow polka-dotted tie, he seemed much calmer, but still said that he believes Wu is trying to assassinate him. (He also said he is “definitely a Gamergate supporter.”)

Connors said that on Friday, he’d gotten a text message that he believed at the time was from Wu, and said he was racing to confront her and maybe race her when he wrecked his car. He suggested that she had positioned a sniper to cause the accident. He also admitted that he’d previously believed that Moot — also known as Christopher Poole, the founder of 4chan — was working with “Islamic assassins” to try to kill him. When the hosts laughed at that, he grew angry, telling them, “There’s nothing funny about that. My life was on the line. The evidence is real.” (Correction: A previous version of this post stated that Connors accused Wu of siccing the “Islamic assassins” on him. That was incorrect and it appears corrected above. I regret the error.)

After the crash, Connors told the hosts, he refused to go to the hospital: “I was convinced — and still partially am — that there was an attempt being made on my life, and did not want to be stuck in a hospital.” He said, too, that he hasn’t been questioned by police regarding the statements he’s made about Wu, much less arrested: “I’ve seen Law and Order, they have to come to your house and give you a thing.”

…He also said that he doesn’t plan to end the “Wupocalypse,” as he calls it: “If you think I’m the type of person to let anything go, you don’t know me. It’s not just ongoing, it’s just beginning… The long-term exposé of the social justice community that I have planned is just beginning. Brianna Wu is just a small part of it.” He added, a few minutes later “I will try as much as I can to bring this gaming criminal to justice. I still believe Brianna Wu is responsible for the car crash.”

OK, not too bad. Also, the author of that piece, Anna Merlan, gave us props on Twitter. Even though I’m not her biggest fan, I have to say, that was very fair of her.

@Kingofpol @Jezebel @TheRalphRetort It was actually a pretty good interview. Disagreed with some of your conclusions, duh, but not bad.

Jezebel being fair to GamerGate? I’m impressed with them for possibly the first time ever. Also, if you look at the headline, you’ll notice that they don’t label him as a GamerGate supporter:

Now, juxtapose that with Sam Biddle over at Gawker. I would never expect GamerGate to get a fair shake from him, but his column on Monday took the fucking cake. Rarely will you see such a disingenuous pack of lies. The media often goes this route, don’t get me wrong. It’s just usually disguised a little bit better than this: 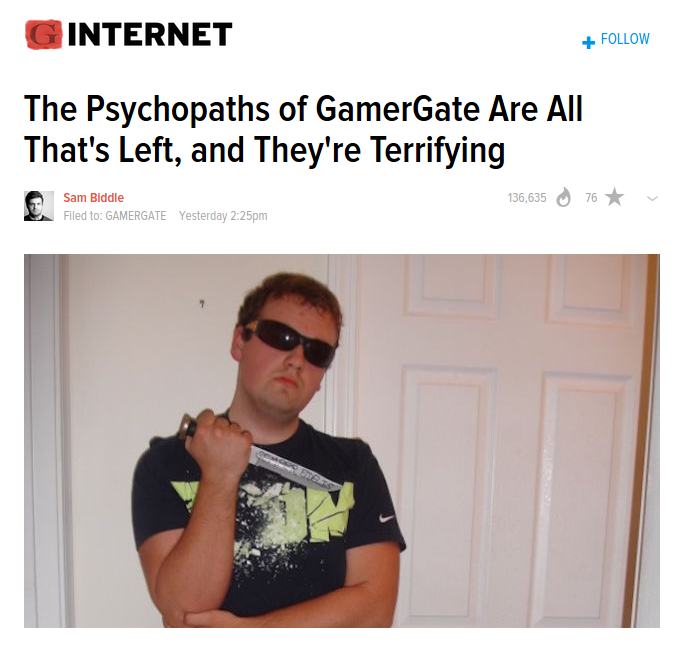 “Game developer Brianna Wu has been stalked, tormented, and harassed by GamerGate—the amorphous reactionary movement centered around video game journalism—for months now. But it’s never been as frightening as it was this weekend—when she watched a terrifying videomade by a deranged fanatic who claims he crashed his car on the way to her home. “I’m worried my husband and I are going to die,” she tells me…

The video is the work of a man who calls himself “Jace Connors,” and claims to be both a retired Marine and Navy Seal. It’s unclear whether he has any real military affiliation, present or former, but his fantasy love of violence is clear, and he frequently shares images of himself posing with guns and knives. He can be seen here assaulting some guy over a stolen Xbox.

Jace Connors might’ve just been another wingnut who lets Call of Duty bleed into reality, but he’s become a popular figure inside GamerGate, which has egged him on through increasingly bizarre and disturbing acts. This culminated with a video on January 30th, showing Connors’ wrecked car on the side of the highway.”

Keep in mind, this is the work of a troll. In case you couldn’t tell by our hilarious interview with Jace Connors, it’s a fucking act. He even started a Patreon last night. And take a look at the new video from his partner. This whole thing is for show. Legitimately disturbed people don’t do all this. And they don’t knock down the punchlines I set up, like Jace was doing in the video. He’s awesome at what he does, don’t get me wrong. Not just any troll could full these many outlets all at once. It’s pretty amazing, really. I never totally bought in, which was why I’ve always been laughing about it. But he even had me questioning it at least a little bit.

Jace was definitely trolling everyone. Check out the Patreon lol https://t.co/LH5GnETrcM#GamerGate pic.twitter.com/h60x7cXqZO

Some of you may think this stuff is in poor taste, and that’s fine. Personally, I think it’s hilarious. Jace just provided a great example of the media being full of shit. Gawker tries to paint him as a popular figure within GamerGate. Since when? The only ones who look halfway decent, are Jezebel and Anna Merlan. We don’t even have to get into GamerGhazi’s bullshit too much. Still, I don’t think they went as #FullMcIntosh as Gawker and Biddle. Let that sink in.

Oh yea, I almost forgot the part where Sam Biddle trashed a veteran and made him out to be insane:

“Connors’ unhinged campaign against Wu resembles that of another GamerGate favorite, a game developer named Slade Villena who tweets under the handle @_RogueStar_. Like Jace Connors, RogueStar claims to be a military veteran, and demonstrates terrifyingly obsessive behaviors—most recently, in a relentless campaign to ruin the life of Peter Coffin, a D-list YouTube personality.”

I talked to definitely-a-real-veteran RogueStar (real name Slade Villena) yesterday. Here’s what he had to say about Bully Boy Biddle’s attack on his service, and sanity:

“In my opinion, David S. Gallant, based on his online behavior, demonstrated a pattern common in suicidal folks I’ve encountered in life. Calling out that suicide potential was an act of decency, not malice. I was also particularly interested in the case of Peter Coffin, because he seems to be milking the GamerGate controversy for his Patreon (Patreon has rules against fraud). Allegedly, Coffin has been faking his relationship status and family for clicks. I contacted one of Coffins brothers over Twitter; just a few honest questions via tweet, nothing too serious. Overall, my opinions are my own on the matter of those tweets. How they can be associated with “psychopathy” is beyond understanding. Biddle has resorted to posting dumb ad hominems about GamerGate people, including broke-ass gamedevs like myself.”

Oh, and here’s his discharge from the military, Mr. Biddle. It’s called research:

I think that’s about it, as far as rounding up this DeagleNation/Jace situation goes. It’s all a lot of misinformation by Brianna Wu and the biased media. None of their bullshit is surprising at this point, but Gawker’s hit was particularly deceitful and nasty. They didn’t get their reputation as the Internet’s Shithole for nothing, I suppose. Also, stay tuned, because I’m sure they will try to blame future acts of trolling (whether by Jace, or others) on us as well.There’s not much we can do but document their lies, and laugh at the absurdity.