I Finally have my setup in place (asshole Walmart somehow came through), so let’s talk about Zoe Quinn and her meeting today with Congresswoman Katherine Clark (D-Mass). She didn’t come alone, of course. She had Cuckmaster Jr. in tow. For those of you unfamiliar with the naming conventions here at TheRalphRetort.com, that would be Alex Lifschitz, the guy I made fun of yesterday for allegedly having a tramp stamp. Can you imagine being a serious person and meeting with these two clowns? This is what our elected representatives here in the United States spend their time doing. With all the shit that’s facing us…this idiot meets with Zoe Quinn and her boyfriend? I would say it’s time to vote this clown out of office, but she won big in her last election (81% of the vote). So we’ll have to settle with making fun of her for now.

Here’s the picture that she took with the two harassers that are about to start up an “anti-abuse” organization with Randi Harper. This would be like the Gambino family starting up a anti-mob initiative. It’s laughable just on the face of it. 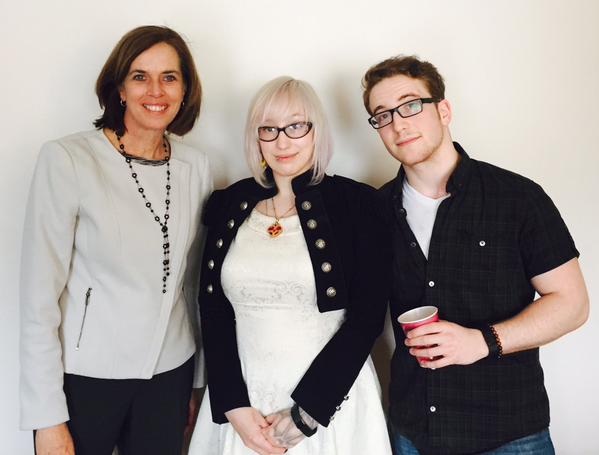 To clarify: super happy to announce that Crash Override is working with @RepKClark on tackling the issue of online abuse 🙂

We have so much data & insight from working with over 500 cases since we launched this year, it's great to be getting it important hands.

Yesssss my GDC talk on comedy in games was ranked 4th in Narrative and 20th overall! Not bad for my first solo GDC talk 😀

“We discovered this fall that Brianna [Wu] was a constituent and reached out to her about what we could do,” Clark tells the publication. “That led us eventually speaking with the FBI about how they’re handling these cases.”

Clark went on to say that her office has met with seven representatives from the FBI in February to determine how seriously the agency is taking the problem.

“It was disappointing,” Clark continued. “This is clearly just not one of their priorities. For me as a former prosecutor, it echoed what we would see 20 years ago around domestic violence.” She added that the FBI didn’t seem all that interested in the “GamerGate problem.”

The FBI probably wasn’t taking it seriously because, you know, it’s not serious. It’s just some professional victims trying to rake in the SJW-bucks, and so-far succeeding. Why would the FBI waste precious time and manpower because someone got their feelings hurt? I’ve called out lawbreakers before. That’s not something I support. But the things they call harassment aren’t harassment. And if they are, then these fucks are the biggest harassers on the block, because they partake in the exact same activities. It all just a bunch of bollocks.

Like I said, there’s nothing we can do here other than mock Rep. Clark. If someone were to challenge her, that would be great, but I wouldn’t expect it. We’ll keep our eyes on the new  anti-abuse org that they’re starting up (OAPI). If they make one false step, GamerGate is going to be there to bring the house down on them. So I’d advise Big Randi to dot every “i” and cross every “t.” Because we’re gonna bust your ass if you don’t.