The Corrupt Journos Started GamerGate, Not Us

When you read about GamerGate in the press, you often see the movement framed as a not-so-merry band of misogynists, who’ve embarked on a woman bashing spree of epic proportions. This whole thing just bubbled up out of nowhere, simply because we hate women and them having sex with guys. Well, I can’t speak for every member of GamerGate, but I love women. I’m actually quite thankful that they have sex with men. I don’t care who you sleep with. But when you’re sleeping with fellow industry members, your boss, a journalist who has covered you in the very recent past? This is newsworthy, and it doesn’t matter how it got to be news. Once it’s out there, it’s out there, like Donald Sterling. The accusations are public and they should be dealt with publicly.

Instead, the megaphone sites like Kotaku, Polygon, Gamasutra, and NeoGaf, blocked out all discussion. Reddit blocked it. Hell, 4chan was deleting shit about it in those early stages. There was a blackout in play, but it backfired. The reason it did goes deeper issue than who a no-name indie developer decides to bed. It’s because they’ve been doing this for years. They block out discussion, delete comments, put you in the “greys,” ban you from forums, and consistently run editorials that only regurgitate their paradigm on how the gaming industry should evolve.

The record tells the tale. First, you have to understand that all these guys are friends. They all live in San Francisco. They’re one big clique, and they constantly parrot and reinforce each other’s minority views. Here’s just a few screens from Kotaku, showing you how our good friend Leigh Alexander has her views pimped on Kotaku and Twitter by all her journo friends. Then, these same people turn around and refuse to give editorial space to anyone challenging someone like her, or Ms. Sarkeesian.  Sure, they always promise they will (Stephen Totilo), but they never follow through and do it. Monolithic thought is all they’re interested in.  I’m gonna look mostly at Kotaku here, since I think they’re the probably the most flagrant. Also, I used to frequent the site myself, until it became the place it is today, where they punish dissent in the commentariat, and refuse to have editorial diversity.

I know she used to work at Kotaku, but damn. I know others that used to work there as well, but they don’t get to be featured on the site in perpetuity. A quick check of Polygon and Gamasutra will show you the same tendency. But it’s more than just a Leigh Alexander problem. She just happens to be the most prominent member of her media cabal.  And it’s not just diversity of thought they hate. They also have a real problem with you, the gaming public. Why won’t you simply fall in line, and listen to your betters? Don’t you see the genius behind all these incredibly boring feminist art games? Why won’t Electronic Arts publish Depression Quest 3D?

They slander games like Killer is Dead, which does have some risque elements. But instead of criticizing on the merits, they misrepresent the game and try to propagandize. Even articles that sympathize with gamers call them idiotic. This type of thing has been going on for years. Eric Cain at Forbes has been keeping an eye on this trend for some time. I guess it’s not surprising that he, too, has earned the ire of our Dear Leader, Ms. Alexander:

If being critical of BioWare, the gaming press, and the “artistic integrity” arguments made at the time is reason to simply dismiss Forbes altogether – Alexander wrote at the time that Forbes had likely “hired new writers that they don’t have to pay very much, and relying on the guaranteed forum and Reddit hits that come from telling superfans of “geek culture” what they want to hear” – (and this is from a journalist who is actively asking the press to be more critical) then I’m just not at all sure what the gaming press ought to do.

Journos pre-occupy their time with things like how big a character’s tits are in Dragon’s Crown (calling a highly respected artist a “teenage boy” in the process), or how many times the word bitch is said in Batman: Arkham City. Then, they have the nerve to talk shit about the ones that came before them, who I enjoyed reading about 100x’s more than the current minor league lineup, who bleat about things of little to no consequence.  Here’s our Dear Leader again, nicely summing up the other side:

Not only do they hate us, but they also hate the culture that birthed us. I used to regularly get GamePro, EGM, and Nintendo Power. Some of the writers there helped me fall in love with the medium. How dare these people act like their new wave bullshit is somehow of greater significance than helping build the whole video game industry? I didn’t see people like Leigh building anything, but she damn sure likes to tear stuff down. If only she was alone. It’s sad to say, but this type of attitude is far from uncommon: 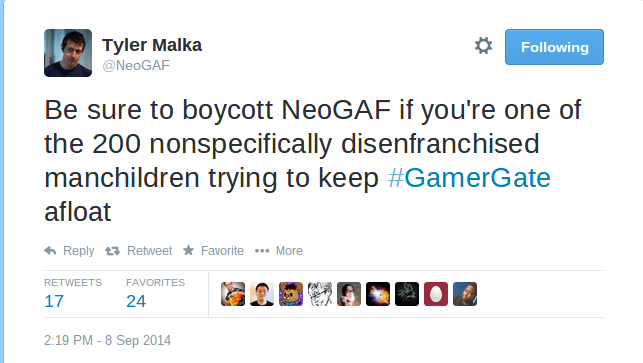 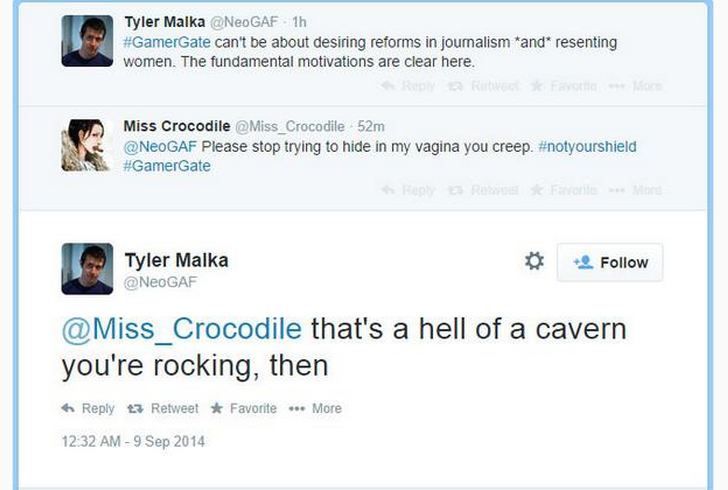 “Fucknuggets?” Such high-level discourse from the anti-GamerGate crew (there’s way more in the full exchange, I just clipped it): 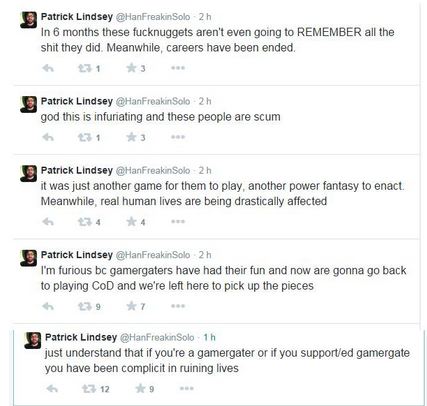 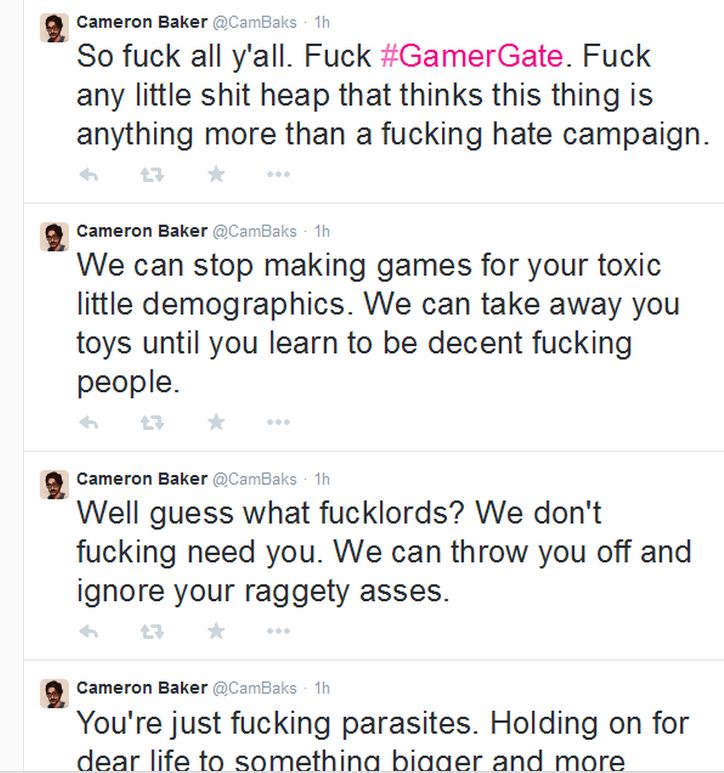 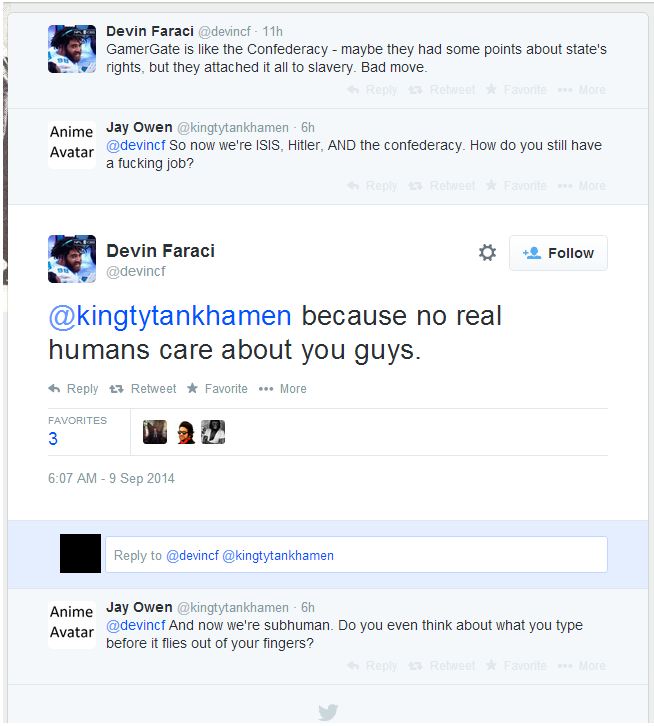 And they constantly want to turn it into a gender or racial dispute: 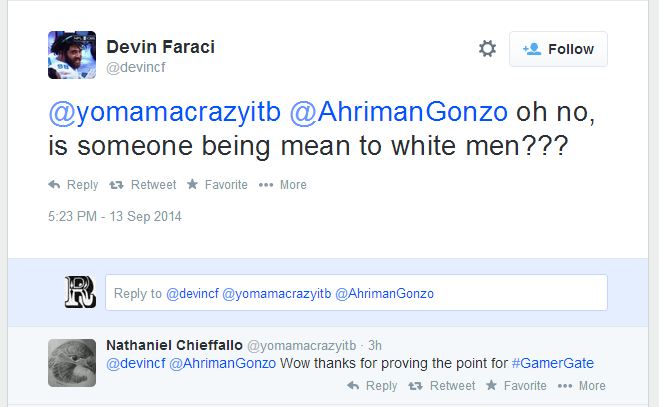 Even some old-school folks have fallen into their pit of hypocrisy. Look at how many re-tweets this Sessler attack received: 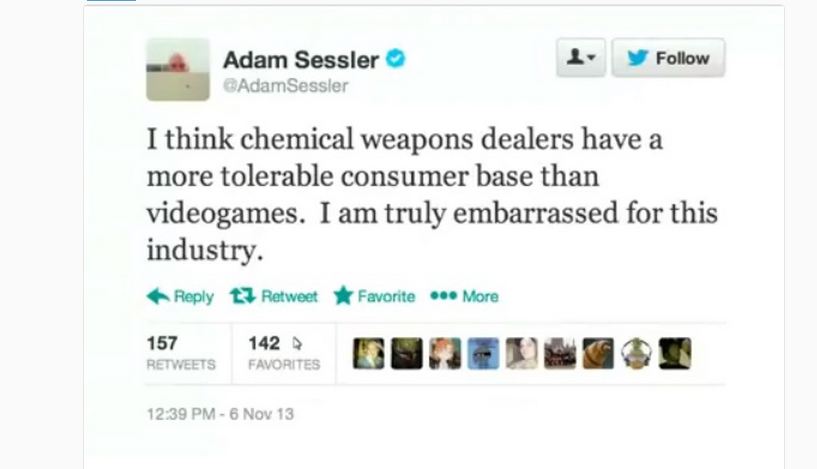 Why do these people hate us so much? We know it all goes back to that Super Nintendo play session when she was 12 for Leigh Alexander. But how has so much of the gaming space become so anti-fan? It’s simple. These people are cut off from real consumers. They all sit around and re-tweet insults, doxx audience members, and reinforce their own minority views. That why GamerGate is such a shock to them. They aren’t used to seeing real people, invested passionately in something they love, something that they get no financial benefit from. Hell, we lose money.  Their native habitat is so corrupted and removed from regular gamers, that they literally cannot understand our movement. 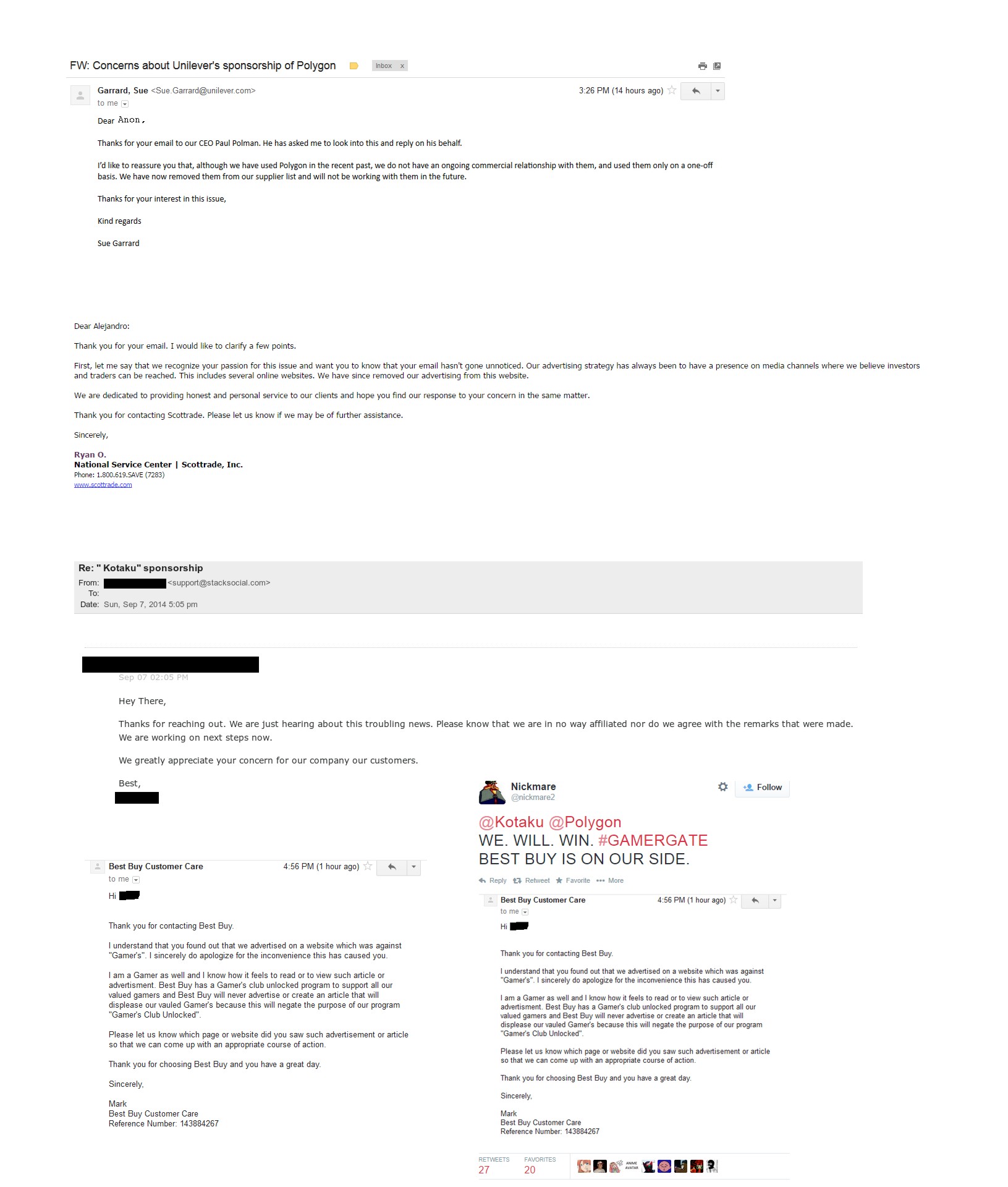 But there is one thing they can understand, and that’s money. They’re losing it now because of us. Advertisers are backing out precipitously, and we aren’t done yet (if ever). We didn’t start this fight with the corrupt journos. But we’re damn sure gonna finish it.