You know, I never thought very much of the SXSW panel. I didn’t hate it. I also didn’t love it. I thought it might be good as a possible recruiting tool, but I saw it mostly as a media stunt. There’s nothing inherently wrong with those, mind you. They’re not usually make-or-break either. So, I just chalked it up to no big deal, and hoped for the best, just like I did with AirPlay.

Well, I was right about one thing: it ended up being great for media attention. Earlier today, SXSW announced that they were cancelling the #SavePoint panel, which was supported by GamerGate. Not only that, they also announced that they were doing away with another panel run by Hamburger Harper and her tranny buddy, Katherine Cross (who works as an Anita lackey, apparently). Katherine comes from the Wu School of trannys, which means that she’s ugly as fuck. Regardless of appearances, those two got their little talk axed, and now the SJW-controlled tech media is working overtime to smear GamerGate. It reminds me of the old days…

Here’s some examples, starting with The Verge:

But there was always a high chance that anything related to GamerGate (or online harassment more generally) would draw some kind of violent backlash. A number of women involved in games criticism or online activism have seen months of persistent threats since the movement started last summer, including a shooting threat that led to the cancellation of a planned talk by feminist critic Anita Sarkeesian. GamerGate supporters, meanwhile, had an event cut short this summer after an anonymous bomb threat.

A South by Southwest Interactive panel scheduled for March 2016 called “Level Up: Overcoming Harassment in Games” has been canceled, with the panelists saying they were told by SXSW organizers it was due to “numerous threats of violence.” A panel featuring pro-GamerGate speakers has also disappeared from the schedule. SXSW has released a statement confirming both events were canceled.

(actually, that article was one of the more fair ones, to be honest)

GamerGate supporters have railed against what they view as politically correct critics of games and their allies in the press. Some people who have attacked games for sexism, including Anita Sarkeesian, a feminist culture critic, have been the targets of online harassment and have had to cancel speaking engagements because of threats at the events.
Neither of the listings for the panels at SXSW explicitly mention GamerGate. The description for the “Level Up” panel said that it would include “experts on online harassment in gaming and geek culture, how to combat it, how to design against it, and how to create online communities that are moving away from harassment.”

(Btw, kudos to the NY Times for at least adopting my “GamerGate” capitalization policy. I always have to change it manually for shitbag sites like The Verge and Jezebel, who prefer “Gamergate.”)
Mashable:

While the two panels appear on the surface to cover similar ground, they actually fall on opposite ends of the political spectrum (such as it is in the gaming space). The “SavePoint” speakers have all been connected to the “GamerGate” hate group (as defined by the National Coalition Against Domestic Violence) at some point or another, and the panel had been painted in the media as a “pro-GamerGate” talk.

Meanwhile, the “Level Up” participants have all spoken out against the activities of GamerGate, both through social media and through their own work. As Cross told Jezebel, the panel wasn’t meant to address GamerGate directly, but rather “the wider problem of online harassment.”

Some conflicts are so intractable, some relationships so toxic, that proximity and conflict resolution are impossible. Such is the state (still) of GamerGate apparently and its particular toxic brand of online harassment, particularly of women. Here’s what Interactives Director Hugh Forrest had to say about the thinking behind the decision to pull the panels, posted on the SXSW website Monday.

The pro-GamerGate panel was planned publicly on Reddit, with members of the loosely organized group chiming in on how to properly address the public, gain festival approval and explain the “movement” to a larger audience while steering the conversation away from some of the group’s most despicable traits. Namely, harassing women and journalists they deem unethical. A sample of the discussion is embedded below. To wit, the proposed panel included The Society of Professional Journalists’ president-elect Lynn Walsh.

Sounds like a positive idea, right? Well, not if you yourself are a harasser – excuse me, I mean proponent of ethics in game journalism – which is what appears to have prompted a bunch of people to send threats of violence to SXSW, causing them to cancel the panel…
When you’re finished detaching your face from your palm, consider letting SXSW know that this kind of response actually indicates an even greater need for such a panel, not a reason to cancel it.

Although neither title mentions it by name, both panels have been viewed and discussed in the wider context of GamerGate, the controversial Internet movement ostensibly about ethics in games journalism that has led to online and real-life harassment of women in the game industry.

Harper, Sinders, and Cross have addressed issues of online harassment before, while Jones, Robalik, and Carrera have been supportive of or sympathetic to the GamerGate movement.

Here’s a handy list for you, although I’m sure there will be more by morning… 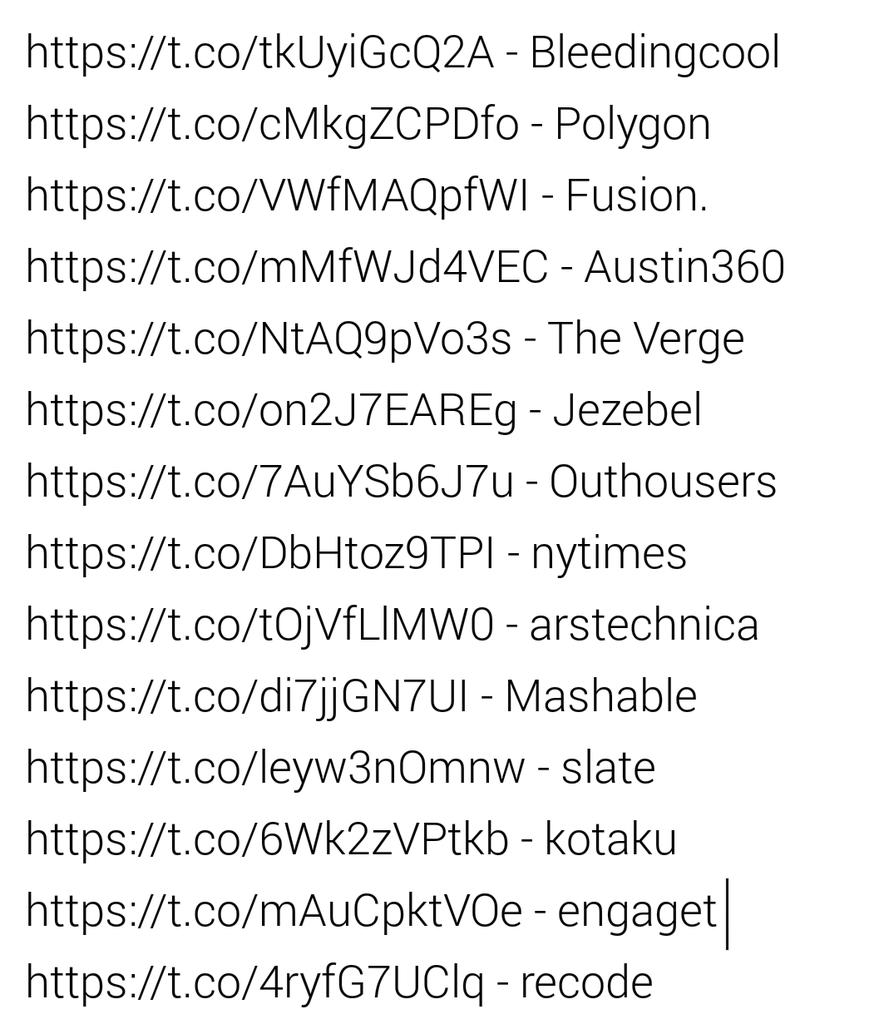 The whole thing smells like another GameJournoPros situation. Notice the coordinated roll-out, with many of the articles saying the same things. One or two of them were fair, but most were extremely negative, focusing on tying GamerGate to harassment or violent threats. The fact of the matter is, there’s never been one single shred of evidence that credibly links anyone from the movement to those kinds of actions. We have seen all sorts of violent threats from the SJW opposition, though. I think I’m going to do a separate post on that later, since it’s a column all on its own. Deuce put it pretty well…

Of course, we had the usual liars and cons out in full-force over on Twitter:

One of the panelists pulled the same shit on a gaming charity stream. https://t.co/NmIJQtCqOJ

MY GOD YOURE RIGHT pic.twitter.com/Z7b12Qf6Zc

Down below, Big Randi is talking about Brianna Wu’s panels still going forward. I guess fatso made some unreasonable requests and they decided to scrap both panels as a result… 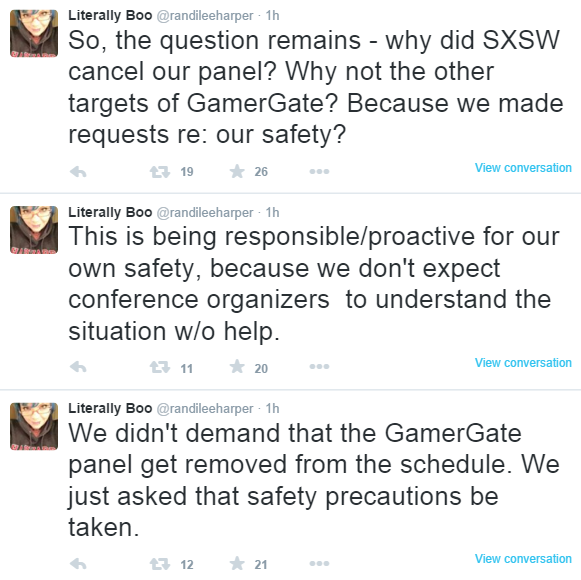 Of course, that didn’t stop the nasty fucker from running its mouth, though:

I agree with the people saying @SXSW has made a mistake here. This is not a "two sides" situation. You have criminal harassers and victims.

Anyway, I think I’ve given you a pretty solid recap of the evening’s festivities. It doesn’t matter how many times you try to change the GamerGate name, or move away from it, the same enemies in the media and elsewhere will never let their lies drop. We talked about this on the LIVE show last Wednesday. There’s no getting away from the GG association. Hell, fuck the lies altogether. There’s no need to be ashamed about anything we’ve done. They’re the liars and frauds, not us. We’ve defended ourselves against their lies for well over a year now. They are the ones who should disassociate from the toxic brand know as social justice. I know I won’t be dropping my battleflag. Ever.