Now, I know we just mentioned Zoe Quinn in the last column, but, such is life (plus she was in a supporting role c’mon). If people don’t like me talking about her, that’s too damn bad. She’s a key figure, and her corruption and love of censorship makes her a noteworthy subject. If someone disagrees with that, it’s cool. Don’t read this story lol. Because I’m about to provide screenshots of the documents that show how Zoe successfully gagged Eron Gjoni. This shouldn’t be allowed here in America, but professional victims are able to get away with a lot these days, and are aided by the accomplice media every step of the way.

In case you hadn’t already seen it, here’s the original affidavit: 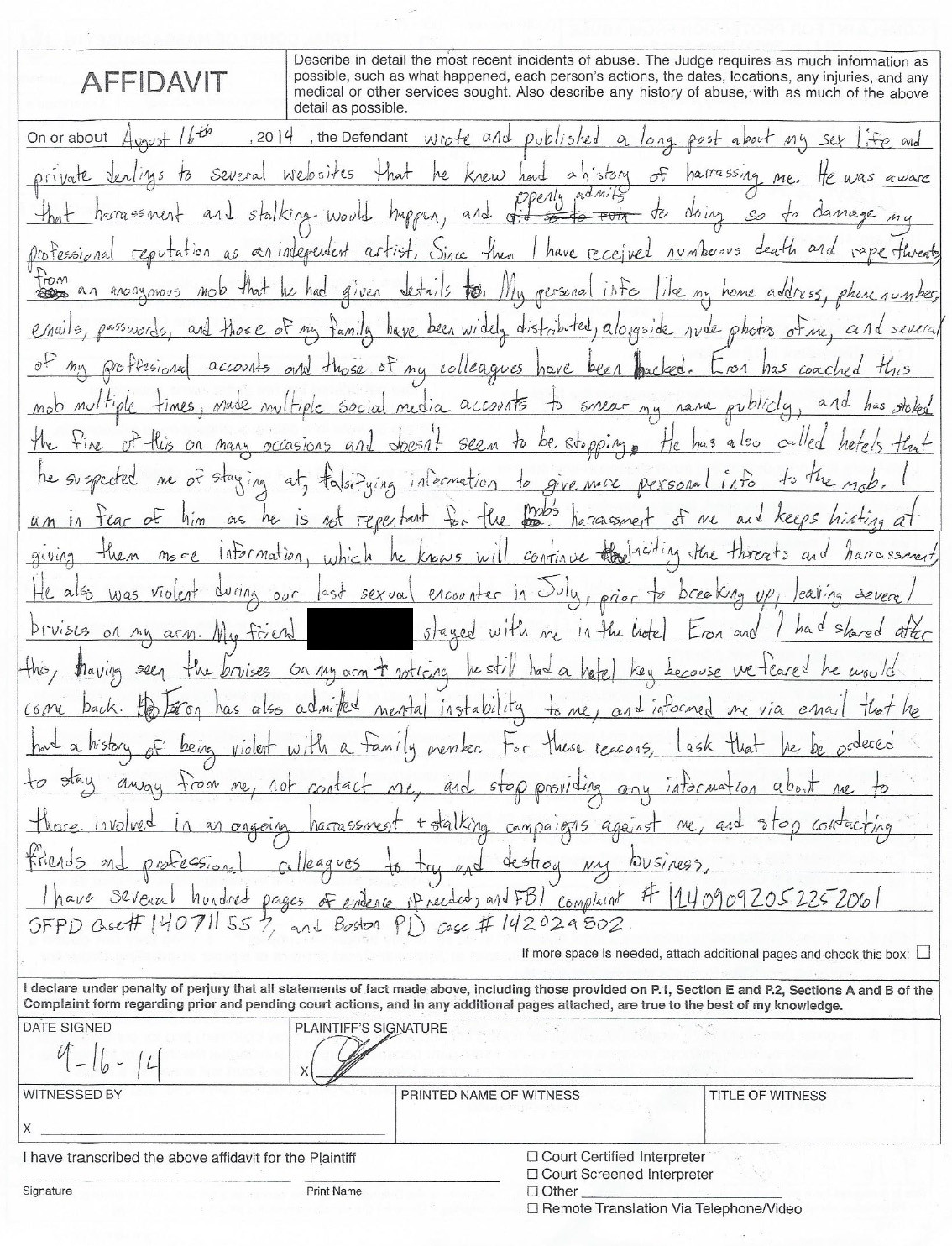 But what I don’t think has been seen publicly until now, is the police report Zoe (real name Chelsea van Valkenburg) filled out the day before. So, in the interest of fairness and freedom of information, here’s the complaint: 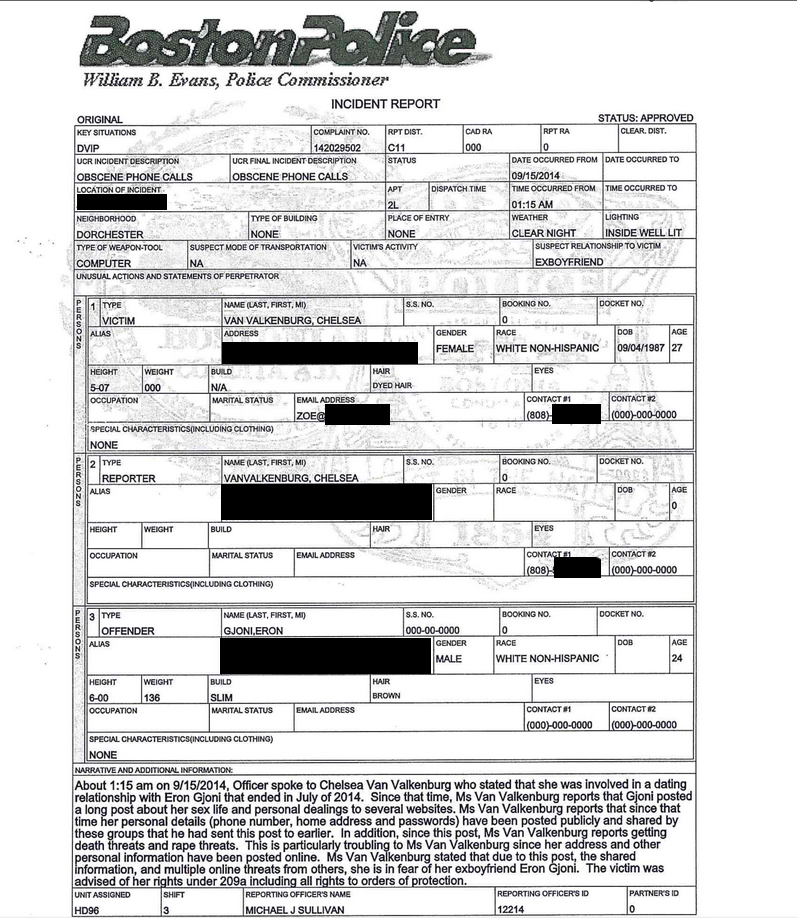 Yes. There is more. Zoe Quinn didn’t stop there. Here’s another police report from the Queen of Lies: 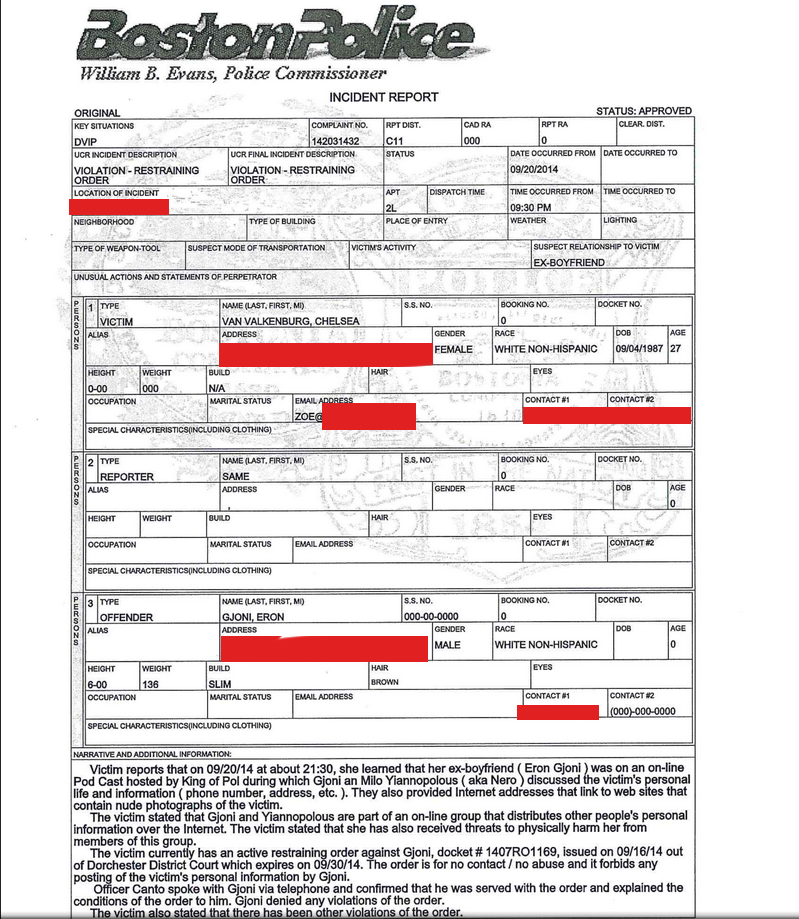 Zoe’s method seems to be to spam the system. We have a few YET ANOTHER police report…and these are just the ones sent to me keep in mind. I’m sure there are more out there. 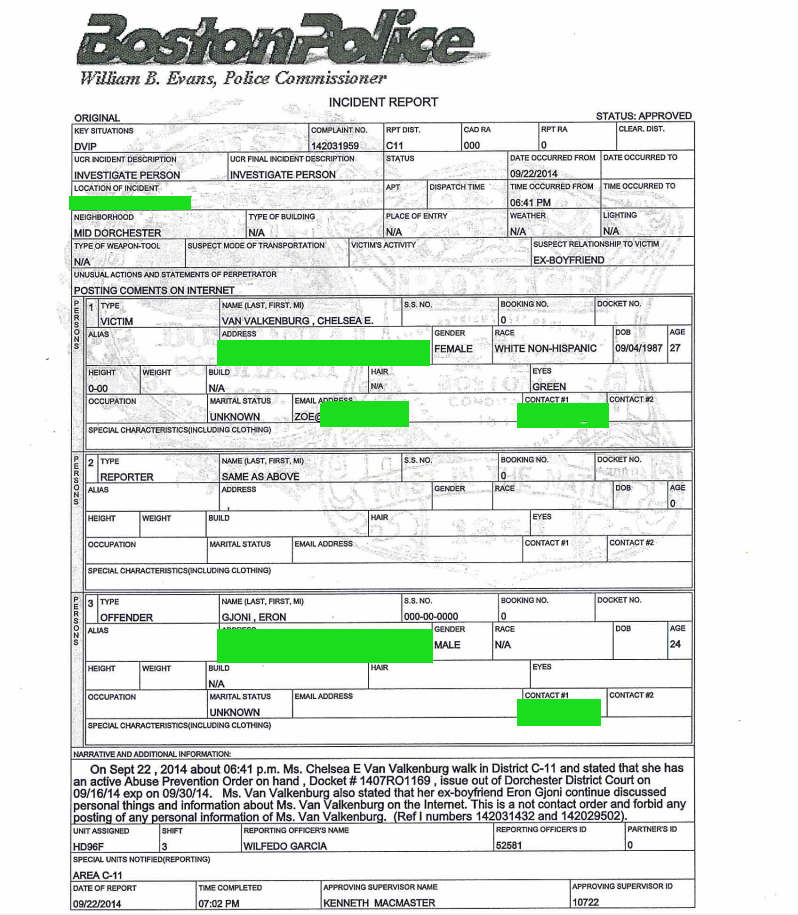 As interesting as the police reports are, the story is really told in the court dox. Eron’s lawyer fights hard, but he’s no match for the SJW hugbox machine. Zoe basically gets to write her own ticket (her name is hilariously misspelled): 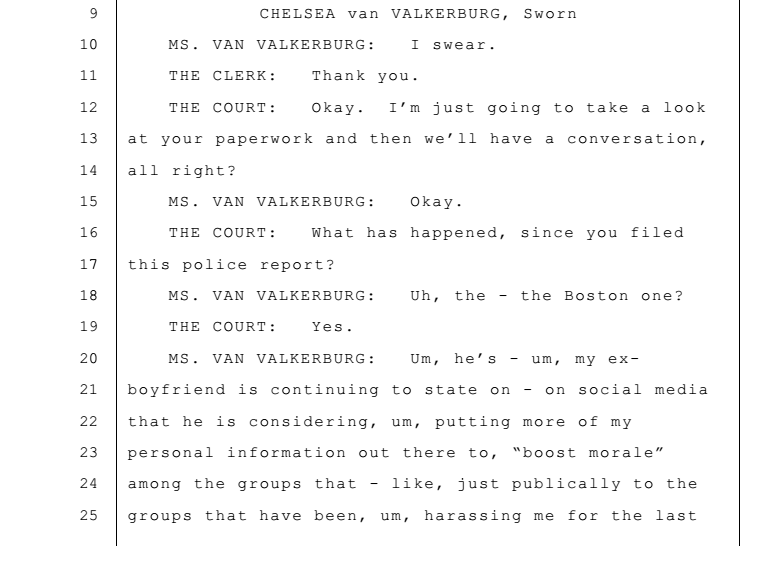 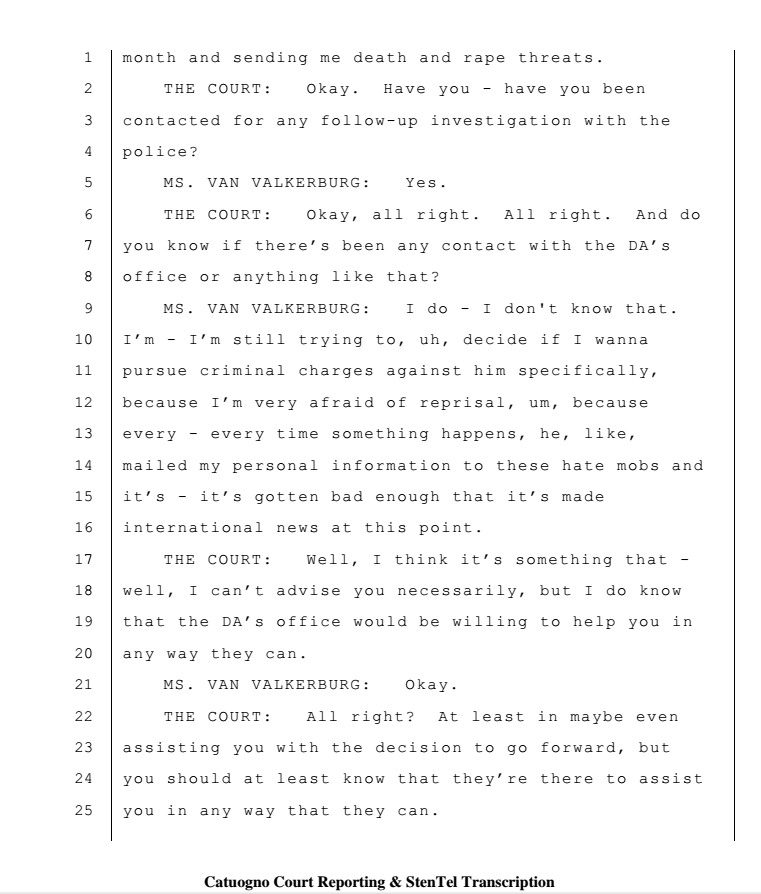 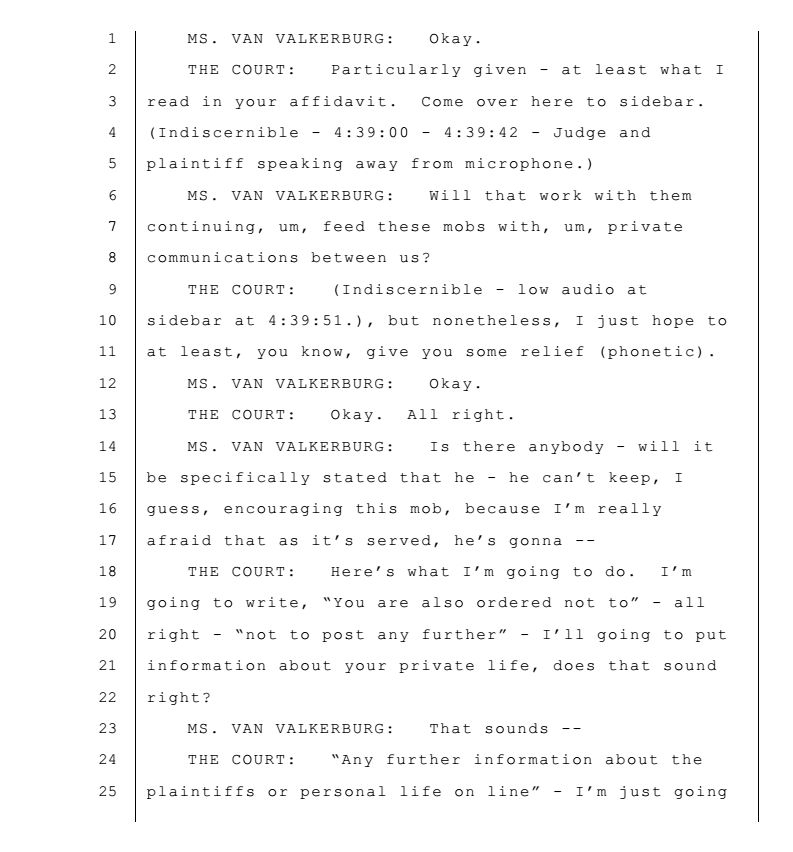 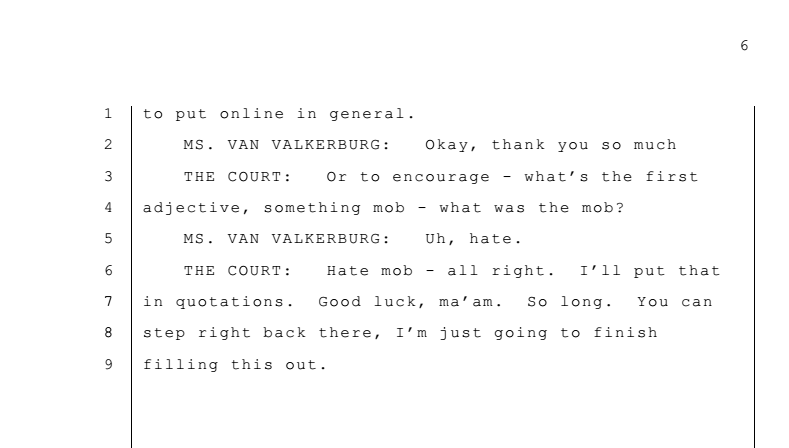 Here’s the second hearing, which I present to you in full. As I said, Eron’s lawyer puts up a valiant fight, but the fix was clearly in from the start: 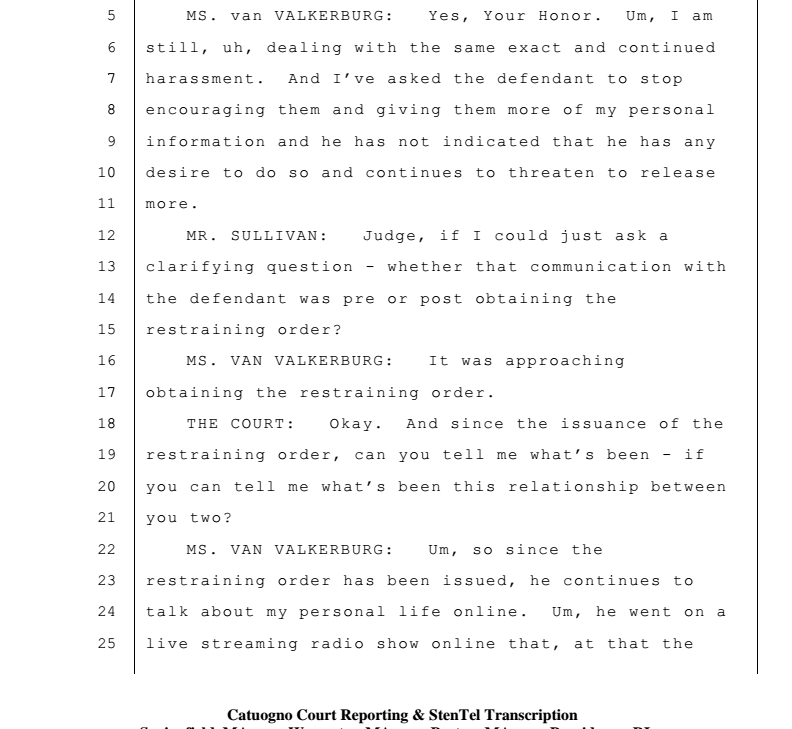 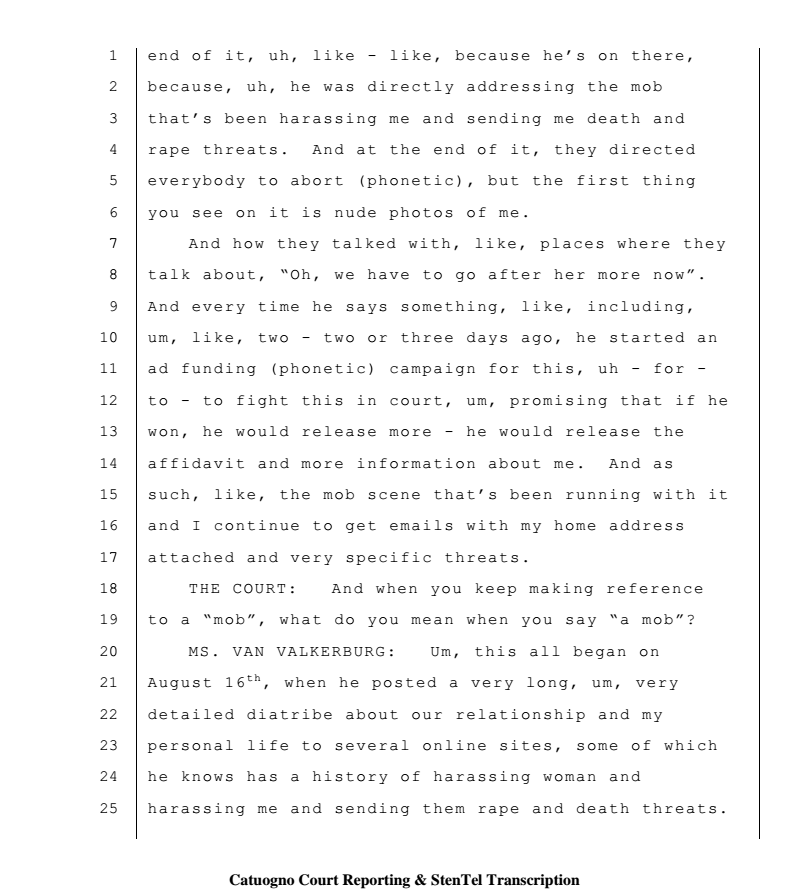 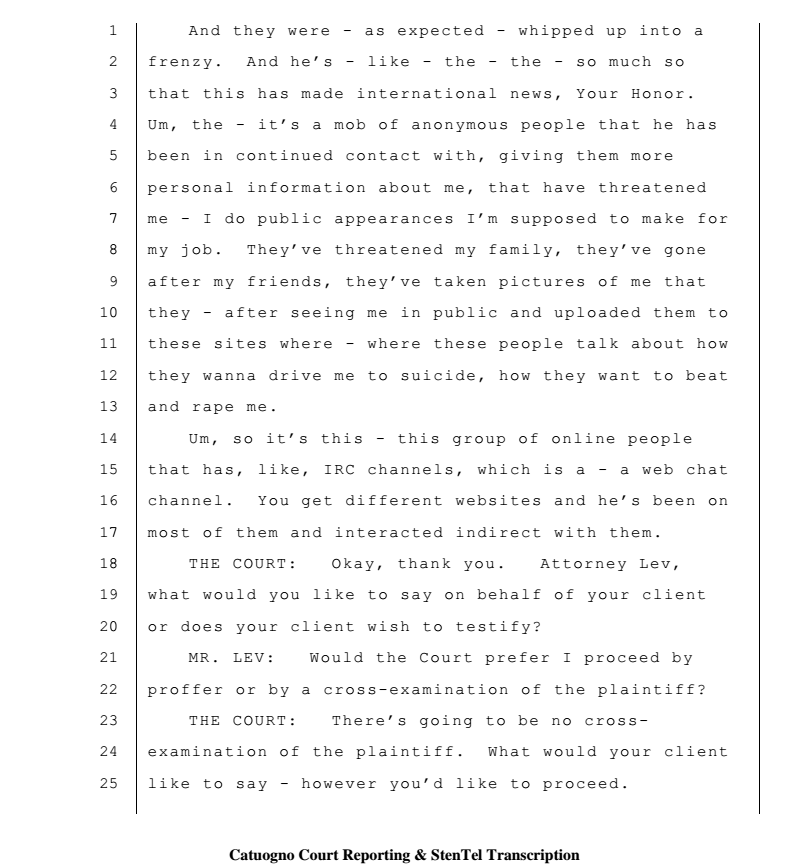 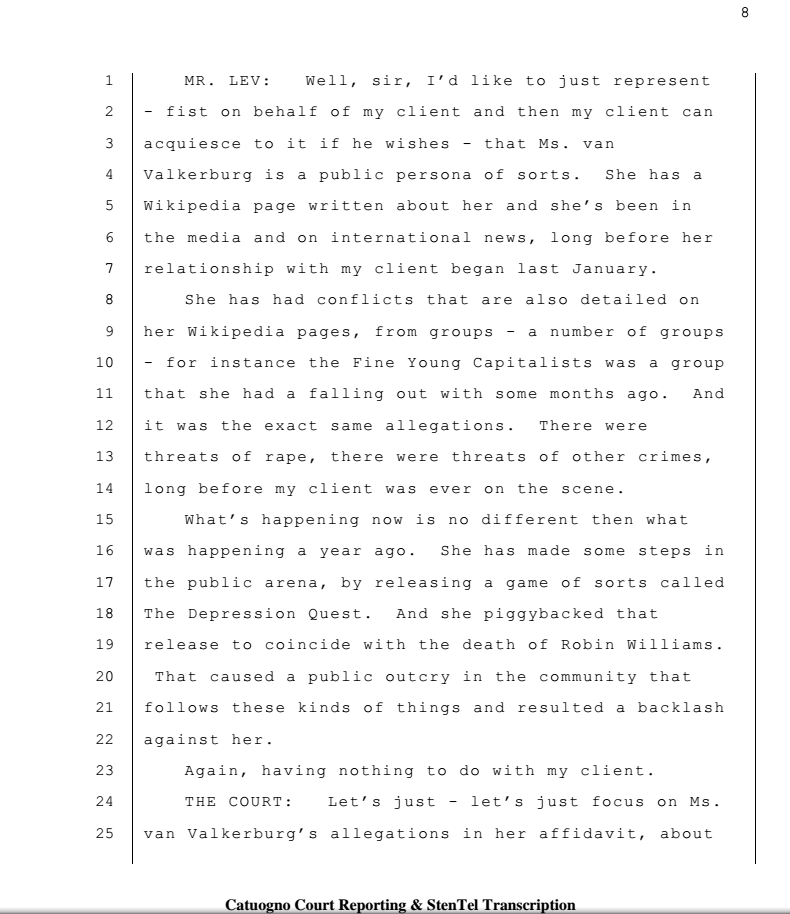 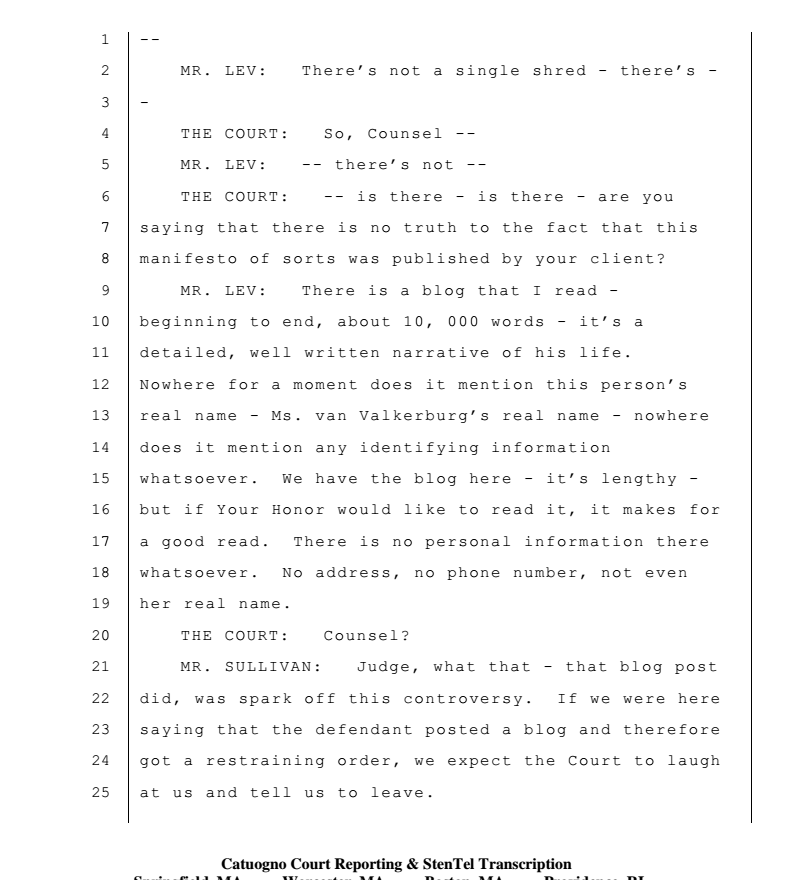 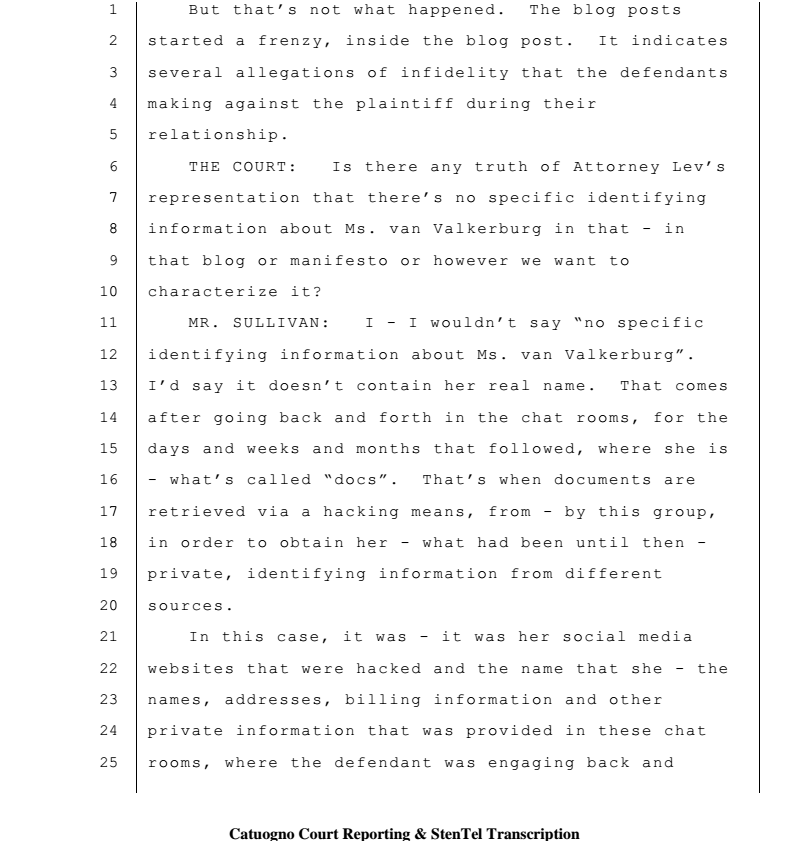 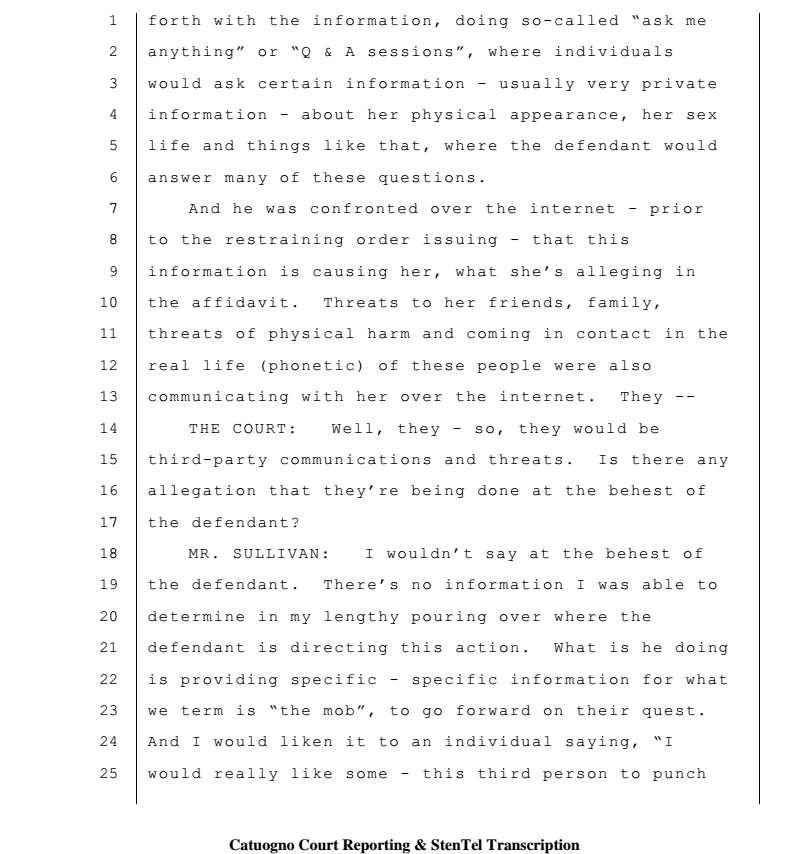 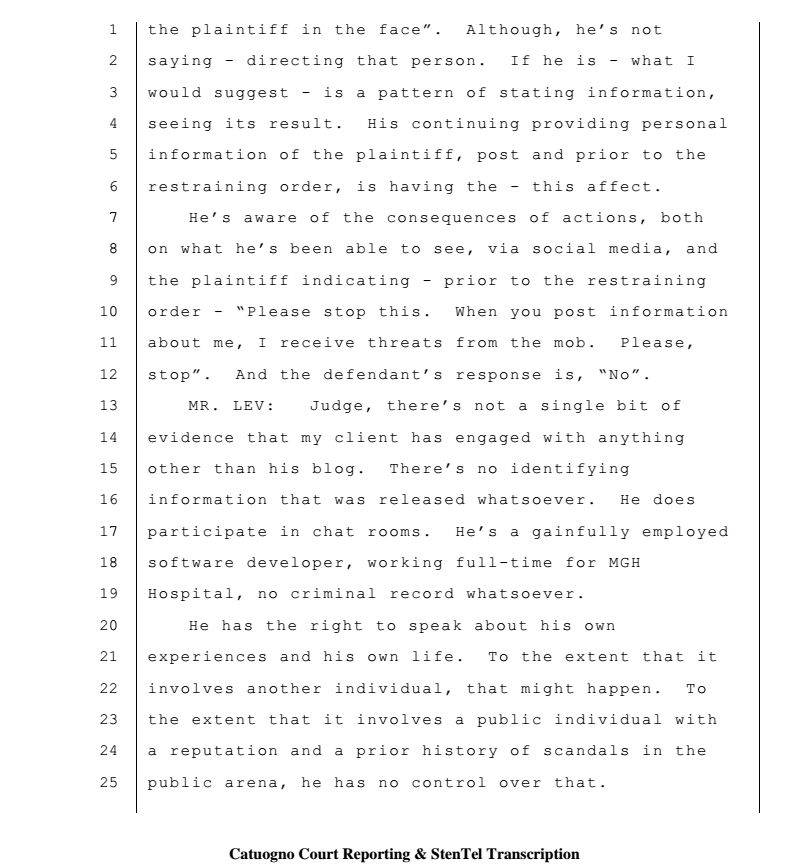 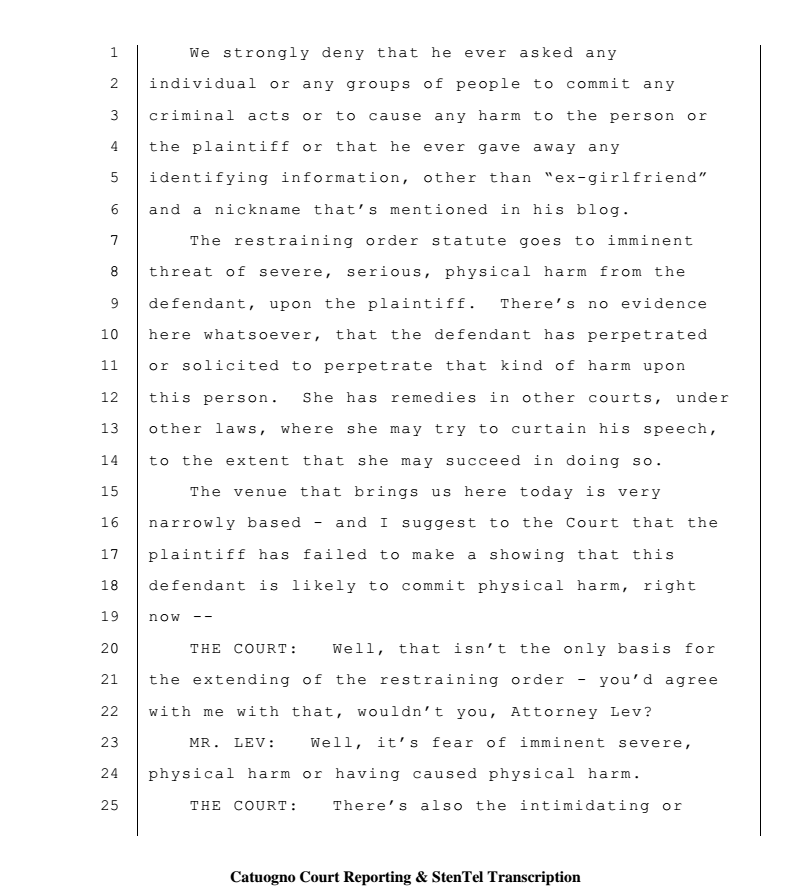 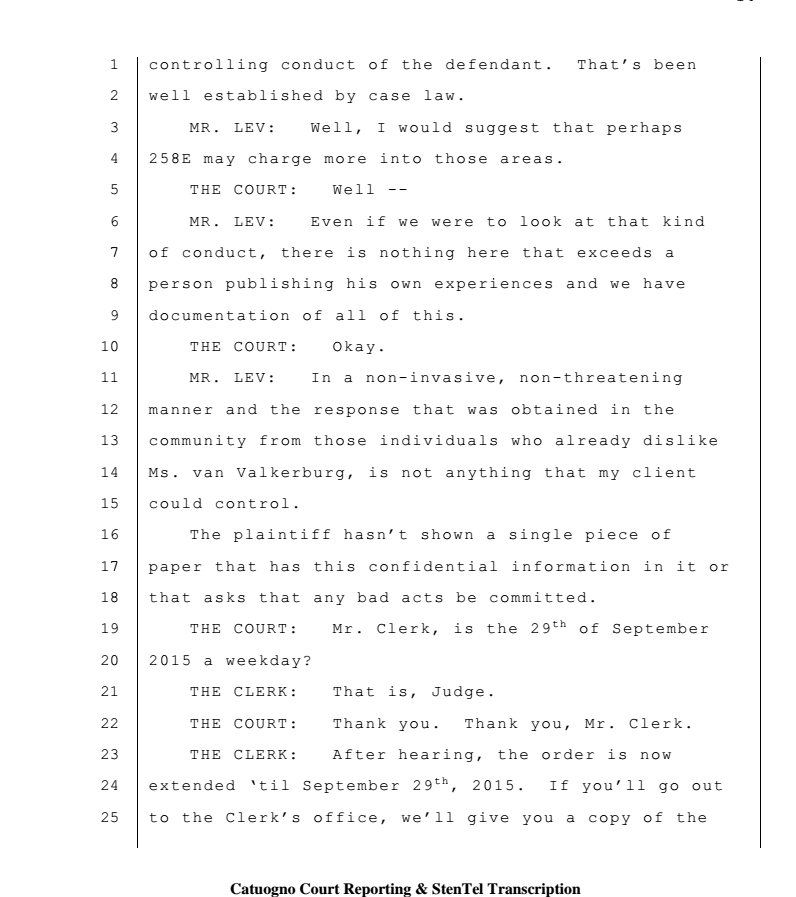 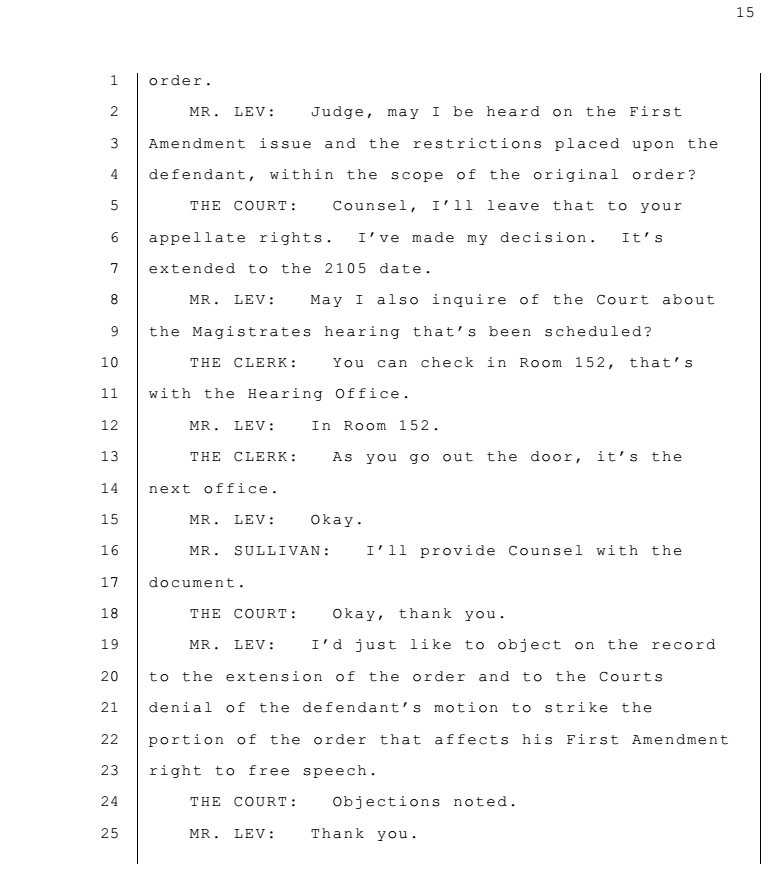 Ordinarily, I might not waste my time with something like this. Well, I would still cover it, but I wouldn’t put up every screen.  I mentioned this in the opening, but the way Ms. Quinn has trampled on free speech is unconscionable. It was bullshit back in the fall, and it’s bullshit now. As I said back in early October:

“So, even though he never threatened Zoe, Eron Gjoni has been silenced by a judge, in the supposedly free United States of America. Is this really what it’s come to? The man has done nothing wrong. He wrote an article about his life. If Zoe Quinn had put up something similar, there would be scores of feminist ideologues who would support that. I’ve seen it happen already, with others. Their hypocrisy truly knows no bounds. People like Quinn and the SJWs will do whatever it takes to silence debate.”

I’m going to work on getting my hands on the November and December hearing transcripts. Admittedly, I didn’t actually do any work to get these. An anonymous source sent them to me. Still, it shouldn’t be too hard to get the others. And even if it is, I’m at least going to try. There aren’t many others out there who will, unfortunately (as you can see from this Popehat screenshot). 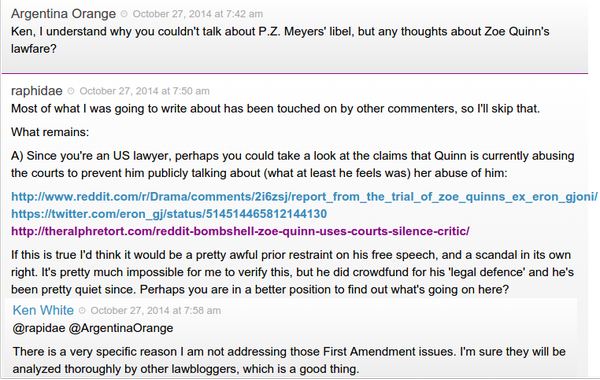 Right now, I’m going to go get something to eat, and then crash out (if Twitter doesn’t suck me in haha). I’ll have more posts for you tomorrow, as always.