Crazy SJWs Target a Teen Because of Her Braids

Every once in a while humanity disappoints me. It started when I decided to create a Tumblr account a year ago, and reached its peak in August when a bunch of white male and some bored feminists decided that they didn’t like vidya and so, you shouldn’t either. But yesterday, I discovered that something could “trigger” the hate of dozens (if not hundred) of people. What’s that, you ask? A 14-year-old (white) girl who decided to change her haircut to braids.

The teen in question, Mallory Merk, shared a few photos of her new hairstyle on Twitter. Many negative reactions followed the news of this unknown 14-year old girl changing her hairstyle to braids like:

Now I’m not saying that racism against blacks (or Arabs, or Chinese, or any other ethnicity) is okay. However, who can possibly think that just because racism exists, it is okay to do the same thing to the “other race?” I can’t (and I won’t try to) understand this logic where, if someone hit you, you have the right to hit too.

But the worst in my opinion is the series of tweets posted by the notorious Jamilah Lemieux “black” activist who also worked at Jezebel and many other “journalistic publications” I don’t intend to read. The main theme of many of her articles is how oppressed she is (I’ve heard that somewhere) and how white people are terrible. 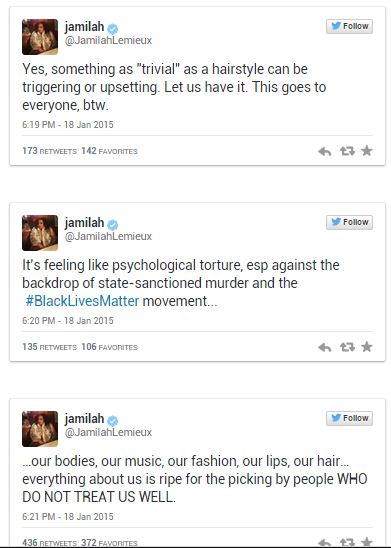 Where do I even start? I could point that the word triggering is used in a serious tone in her first tweet or the fact that she acknowledges that yes, a hairstyle is something that is indeed TRIVIAL. But no, obviously she continues her rant by explaining that a kid embracing her culture is a torture and how white people are stealing black people’s culture .

First of all, it’s nice to see that Miss Lemieux can make a link between the death of a black person involving the cops, and the hair of a teen. As I am writing these lines I am still struggling to find a credible link between both of those things.

The second problem with this rant is that she is literally asking for the return of segregation. Because yes, if white people are not allowed to borrow from the culture of others, it means that they have to be separated from any other ethnicities. I mean it’s how the whole world works. A culture meets another and if there’s no destruction of one of them there’s an exchange, a mix between both. I am sincerely worried about the mental state of these kinds of people. How sad and mentally unstable do you have to be to be “triggered” by some stupid thing?

Sadly, Mallory had to apologize and explain that she is grateful that people “educated her” (I would say brainwashed). This is what happens. A kid is now thinking that she’s guilty of being racist just because she had BRAIDS IN HER HAIR. This is what the world has come to. Guilt is now something that white people should feel every time they are doing something that black people supposedly did before them (which is not true since the Native Americans had this kind of hairstyle too). Now this kid will grow up thinking that everything she does can be offensive, or she will become a crazy SJW who will harass other people.

Hopefully, not everyone is a complete paranoid moron and a lot of people are now supporting the kid.

And in a way, it all comes back to #Gamergate. How, you ask? Well, if you ever let the SJWs win this battle for vidya then everything will be offensive, triggering, and will have to be censored. What happens in real life will happen to video games if we stop fighting. And we can’t let that happen. The SJWs can’t be allowed to dictate our lives.

EDITOR’S NOTE: Here are a few tweets from Mallory’s account:

@mallorymerk I had a LOT of people talk down to me about my hair to, girl do you oxoxox pic.twitter.com/I65xrK4tt1