Just when you think a twisted creature like Kurt Eichenwald can’t possibly stoop any lower, he always finds a deeper pile of mud and filth to wallow in. Ralph reported a few days ago that Kurt Eichenwald has doubled-down and escalated the lawsuit between himself and John Rivello over the posting of a flashing animated GIF, now claiming that he will be naming 90 so-called “co-conspirators.”
Total
0
Shares
Share 0
Tweet 0
Pin it 0

Guest Editorial by Jack P. aka “The Gator Gamer”

Just when you think a twisted creature like Kurt Eichenwald can’t possibly stoop any lower, he always finds a deeper pile of mud and filth to wallow in. Ralph reported a few days ago that Kurt Eichenwald has doubled-down and escalated the lawsuit between himself and John Rivello over the posting of a flashing animated GIF, now claiming that he will be naming 90 so-called “co-conspirators.”

Oh, and he an interesting way to celebrate Holocaust Remembrance Day (the second one we’ve had this year, but I digress). He decided to sue the veteran he already stuck with multiple federal and state charges over the high crime of sending his goofy ass a “strobe effect” flashing gif. So not only is jail time a real option for said veteran, John Rivello. Now he’s also facing possible financial ruin on top of that.

Newsweek journalist Kurt Eichenwald is not done with the man he says gave him a seizure via tweet. He filed a federal lawsuit on Monday against Twitter user John Rivello.

The lawsuit stems from a December 15 incident where Rivello allegedly sent Eichenwald a tweet with a strobe light image and the text “YOU DESERVE A SEIZURE FOR YOUR POSTS.” The journalist, who suffers from epilepsy, said he actually did suffer a seizure from the incident.

News of the lawsuit comes after the FBI arrested Rivello in March. “Based on publicly-available documents associated with the criminal proceedings against Mr. Rivello, we believe that other individuals conspired with Mr. Rivello in planning and executing the sending of the strobe light to Mr. Eichenwald,” a statement from Eichenwald’s attorney reads. Eichenwald is hoping that through the discovery process his attorneys will find the people who allegedly conspired with Rivello.

“We are also considering additional civil actions against the more than 90 people who have sent flashing strobe lights to Mr. Eichenwald subsequent to the public disclosure that Mr. Rivello’s strobe attack had caused Mr. Eichenwald to have an epileptic seizure,” attorneys for Einchenwald said.

Oh, and he’s on the lookout for more lawsuits to file. What a guy! He’s like a one man walking advertisement for the pettiness of media-types. Here’s hoping that all his moneymaking schemes fail, along with the criminal charges against Mr. Rivello.

I wonder how many of those so-called co-conspirators will just happen to be prominent Trump-aligned individuals that have been openly critical of Kurt Eichenwald? We know that Kurt has used his career at various fake news media outlets in order to intimidate and silence people that disagree with him. He also has a penchant for filing frivolous lawsuits, such as the lawsuit filed against his mother as originally revealed by frequent TRR contributor Wild Goose on Twitter. (His account was later suspended.) 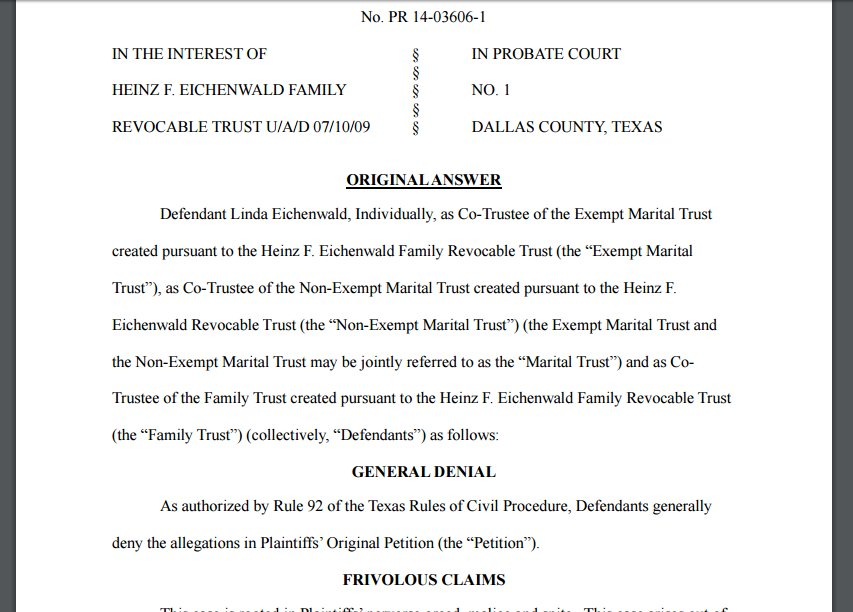 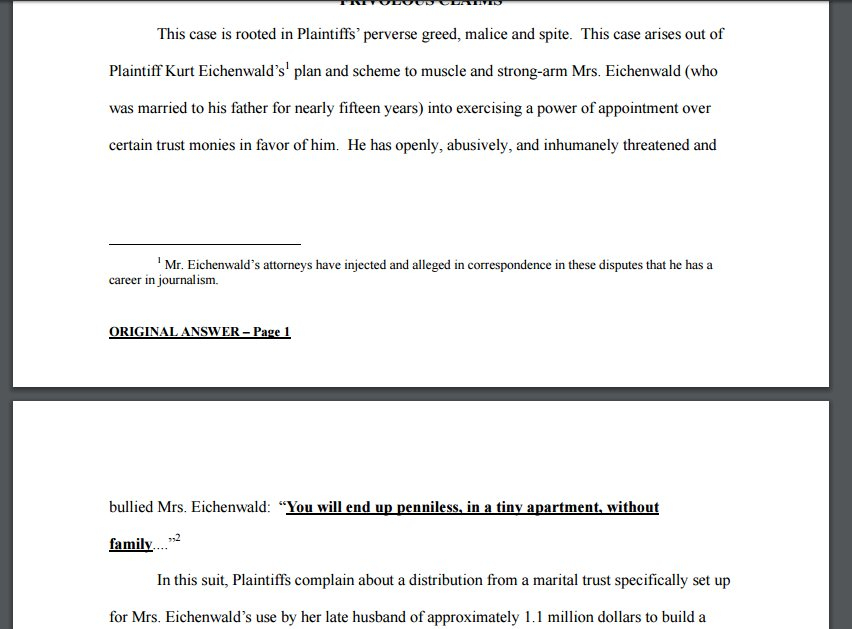 Based on his extensive history of abusing the legal system, it’s very likely Kurt will use this lawsuit as a vehicle to destroy the lives of his detractors. It wouldn’t surprise me to find Eichenwald naming people such as Mike Cernovich, Baked Alaska, and even Ethan Ralph, the owner and editor of this very website in his list of “co-conspirators.” The very act of writing this article exposing Eichenwald’s checkered past might even land a nobody like yours truly on his lawsuit-happy hit list.

Even more absurd regarding this lawsuit is Eichenwald’s claim of serious bodily injury stemming from the flashing animated GIF in question playing automatically. Baked Alaska highlighted an article written by Kurt Eichenwald himself that called into question whether his account had autoplay of animated GIFs enabled.

From the article in question:

I have warned my children and my wife to be extra careful. And now that I have revealed how easy it is to inflict an injury on me, until this election is over, I will not be pushing PLAY on any unsolicited video I receive. It’s simply too dangerous.

Additionally, Mr. Eichenwald responded to another user on Twitter that he had not slept in several days and had been drinking, both being activities which can contribute towards the occurrence of a seizure.

As of the publishing of this article, Kurt Eichenwald has yet to publicly produce medical evidence that Mr. Rivello’s tweet actually resulted in a seizure.

Not only has Kurt abused his career as a so-called journalist to bully his mother into giving him a larger inheritance in court, he used it as a shield when he was accused of buying thousands of dollars of images, alleged to feature the sexual exploitation of children. When called out on this by his former employer the New York Times, Eichenwald claimed that he purchased the images for “research.”

It’s unclear what type of research Kurt Eichenwald alleges to have engaged in.

Kurt also routinely acts in stark violation of the Twitter Terms of Service without so much as a slap on the wrist, such as this incident where he threatened to use his media career to intimidate this woman on Twitter.

Later on in the thread, friends of Eichenwald would post additional personally identifying information in stark violation of Twitter’s guidelines, but neither Kurt nor any of his followers were suspended for this. You know who was though? The lady under threat.

This was not an isolated incident. Eichenwald routinely engages in the very same “targeted harassment” that many falsely accuse right-wing Twitter users of engaging in. Kurt has numerous times threatened to post personally identifying information on people critical of him on Twitter, but any and all reports to Twitter Support staff routinely fall on deaf ears.

He also publicly issued threats of violence, claiming he was going to openly shoot people that made him feel “threatened.”

In light of all of this remarkable evidence, I believe that Mr. Eichenwald is a deeply disturbed individual in need of serious psychiatric help. I highly doubt the claims being made by Kurt Eichenwald are in any way truthful based upon his colorful past and abuse of our legal system, and I believe it is highly likely that his case against Mr. Rivello and these alleged co-conspirators is built entirely on a web of lies and deceit.

Like so many others, I publicly condemn the Federal Bureau of Investigation and the Department of Justice for their efforts to erode Constitutional protections in an effort to criminalize Internet speech. Regardless of how purportedly stupid Mr. Rivello acted in his alleged private messages, no one should be jailed and fined for posting an animated GIF on the Internet.

How ironic it is that someone claiming to be a journalist would seek to erode protections enshrined by the First Amendment in order to punish and silence his critics. Hypocrisy thy name is Eichenwald.