OK, I guess that headline is slightly inaccurate. It’s only trending number one here in the United States, but since Ted Cruz is running for president here and not worldwide, I would say the US is his more immediate concern. Someone on Twitter just asked me what it was about. So, I figured why not come here and talk about it myself, while explaining it for those who don’t already know what it is.

Oh, wait. Never mind that. It was also trending number one worldwide for a long time as well. So much for it only being the talk of America!

Basically, it’s very simple. The National Enquirer is one of the biggest supermarket tabloids here in the US. They busted John Edwards, Rush Limbaugh, and a whole host of other people in the political world. They are notorious, though, so many Cruz supporters will dismiss this report out of hand. And hey, it could be wrong. But if it’s right, this will devastate his campaign. 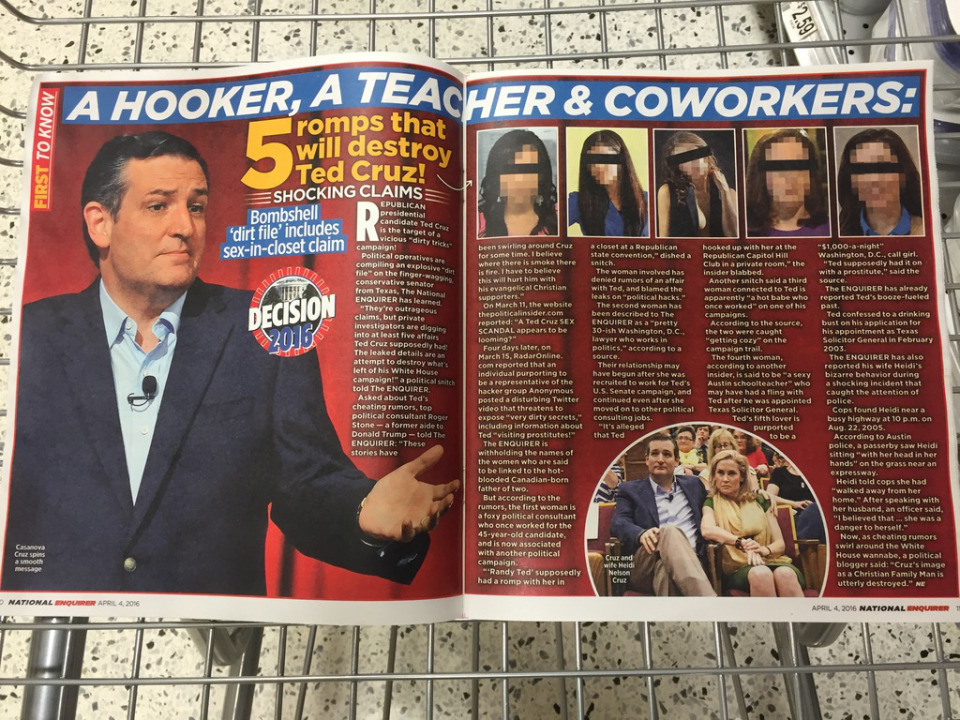 As the Enquirer points out, the reason this would destroy his campaign isn’t because of the affairs alone. It’s because of the way he has portrayed himself to the public. The guy has wrapped himself in Jesus and the Bible at every turn. Glenn Beck is basically acting like he’s the Second Coming of Christ. Trump has had well-publicized extramarital in the past himself, but he doesn’t have the same image. Also, there’s no reason to believe he’s still partaking in such behavior. If this turns out to be true and even one of the five women come forward, then ted Cruz might be done as far as his presidential aspirations go.

A supporter of his came at me on Twitter to ask how I could believe this, why are you slandering Ted, etc. Well, I’m not saying I do believe it. What I am saying, though, is that the National Enquirer has a track record for being right on these sorts of things. I’m also saying, as I just reiterated, that if they are right again, then Ted Cruz is over. His campaign now has two choices. They can either respond to this officially, thus blowing it up even further. Or they can ignore it and hope that the mainstream press refuses to cover it. I wouldn’t bank on them completely ignoring it, although a large portion of old school outlets most likely will. How the Cruz campaign responds today will go a long way towards deciding how this plays out.

Of course the danger for Cruz is, if there’s a smoking gun and he denies it, things will get even worse for him. If he does end up responding, look for his campaign to try to put this off on Trump somehow. I’m not sure how they will do that, exactly, but that’s the most likely play. They’ll probably point to Trump’s tweets from earlier in the week, saying he encouraged this sort of scandalous reporting by going after Heidi Cruz, Ted’s wife. He’s running for the Republican nomination, though. This is the same crowd who went after Bill Clinton for his affairs, so if more evidence comes out on Cruz, I don’t expect that strategy will fly.

All-in-all, this election campaign just got even more exciting. What in the hell is going to happen next?

UPDATE: Just as I predicted, Cruz has placed all the blame on the Trump campaign. I didn’t know for sure that he would respond, but I know that if he did, that’s the play he would make. I guess the scandal was getting too much traction to ignore. I still don’t think this was the right play, though. It seems like he just made the whole thing even bigger. The national media will swoop in now for sure. Plus, if there are any smoking guns…he’s screwed.

I want to be crystal clear: these attacks are garbage. For Donald J. Trump to enlist his friends at the National…

Trump’s campaign spokeswoman Katrina Pierson, one of the people Cruz is alleged to have had an affair with, rejected the story…at least as far as her role in it. She didn’t rule out the rest being true.

What's worse? People who actually believe the trash in tabloids, or the ones who know it's false &spread it anyway? #stupidity on all levels

Of course the National Enquirer story is 100% FALSE!!! I only speak to myself, however.

UPDATE II: Trump just put out an EPIC response lol. I don’t think I’ve ever read anything quite like this, actually…