I wrote about David Gallant the other day, as you might have noticed. To be honest with you, I had never once heard of this bum before GamerGate started. In fairness, no one had ever heard of me either, so I won’t hold that against him. But over the months, he’s stood out as being one of the biggest weirdos and pussies the other side has. He’s had me blocked forever, but would still routinely call me out like I could see what he’s saying. I never paid him much attention, though. He’s good to laugh at, but until recently, not everyone has been exposed to his brand of insanity.

That all changed with his unhinged attack against TotalBiscuit. Of course, no one read it with any seriousness. Gallant is not a serious person. But it did give us a chance to have a hearty laugh at his expense. Other than that, it didn’t accomplish much. I guess that annoys him, so he’s been calling people out again, even though he keeps his tweets protected, and uses Big Randi Harper’s blockbot. Who exactly does this lame think he’s fooling?

My Dad used to tell me a story about when they first introduced cameras into the House of Representatives. The congressmen would give these passionate speeches, and then at certain junctures, they would challenge the House, “Does anyone dare speak against this golden proposal…etc.” The only thing is, most of the time, the House chamber was fucking empty. They were using a cheap trick to make their speeches seem more powerful. Nowadays, the camera pans around and shows how empty the joint is from time to time. I recount this because I’m fond of the story, and also because this is the David Gallant Method.

Since he usually protects his tweets, yesterday, he added a new wrinkle. He unprotected his tweets for a bit, and then started calling people out. The only thing is, he still had them blocked. This sad stunt could only be concocted by a lonely and pathetic individual (credit TheIvyClover1 for these screens): 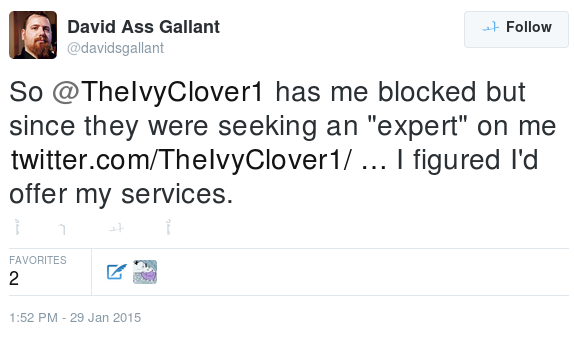 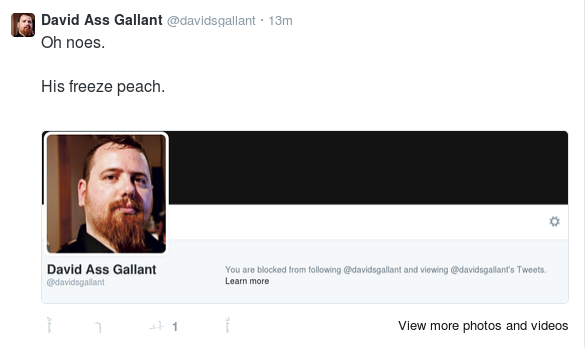 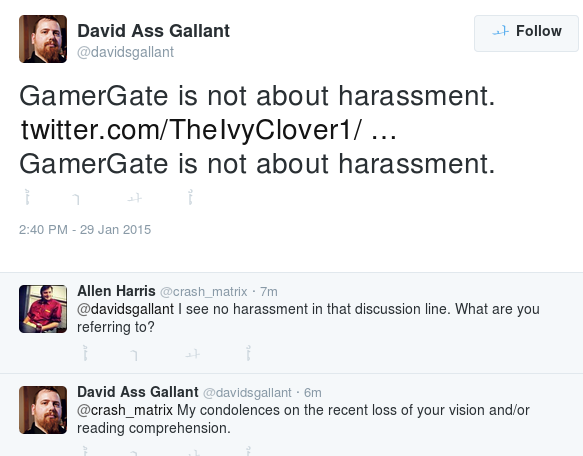 (This sad fuck is still going. And we haven’t even gotten to the best part yet. It’s coming, though.) 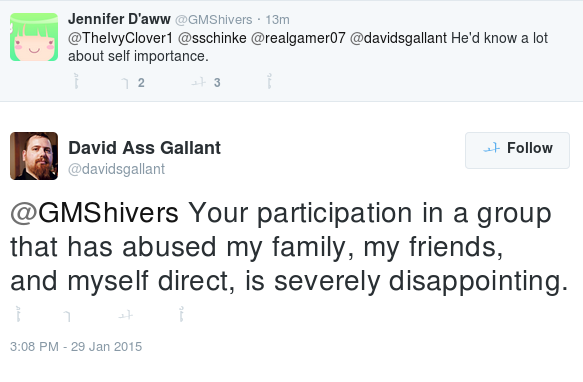 (Oh, look! He’s trying to drag a real developer into his madness.)

And how did the little bitchboy find the tweets so quickly, despite having everyone blocked? Well, you can use Twitter search without having to be logged into your account, for one. 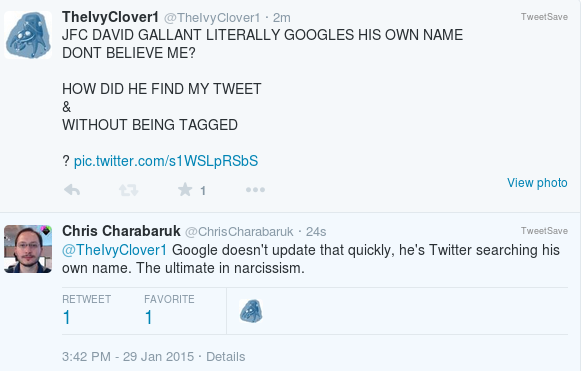 Before we go, that’s not all that David had to share. He also wanted to shed light on his declaration back in December that he often thinks of GamerGate when he reaches sexual climax. This is pretty disturbing. I spend the majority of every single day on GamerGate, and that’s never happened…and I’m pretty positive it never will. 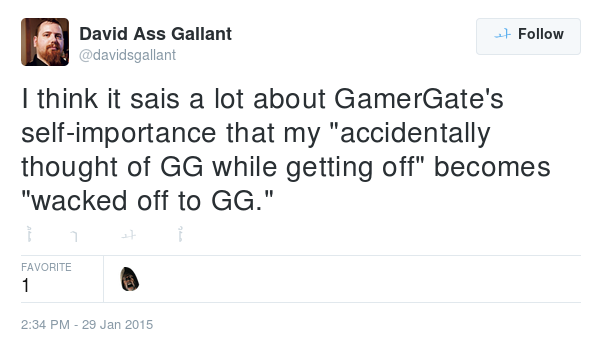 I think this is something you need to speak to a psychiatrist or sex therapist about, not broadcast on Twitter. All we can do is laugh at your dumbass. Perhaps it’s wrong to be amused by such a sicko, but I can’t help it. It’s hilarious. Next time, keep it to yourself, David. We don’t want to hear about your strange proclivities.